Overseas Birding Trip Reports available by clicking on the links below, broken down as:

See the Birding Trip Reports - Cape May,  NJ,  USA page for a series of reports from Cape May.

All photos copyright of the author unless stated otherwise.

Simply stunning introduction to CA includes the visit to Santa Cruz Island, home to the endemic Island Scrub Jay and Island Fox. Also a nice selection of raptors along the Pacific coast and a variety of passerines and shorebirds.

Lawrence's Goldfinch seen as we left the coast and Yosemite didn't disappoint with views of Sooty Grouse, White-headed Woodpecker, Cassin's Finch and Black Bear. Mono Lake was different hosting many speciality species such as Brewer's Sparrow and Sage Thrasher.

It was hot and the birding was likewise! Mountain Bluebird and Greater Sage Grouse started things off and Lewis's Woodpecker and Clark's Nutcracker added to the variety. California City proved to be an oasis for passage migrants.

En route to Salton Sea, this Hummingbird site didn't disappoint, although they could be tricky to ID.

Now very hot! The Salton Sea hosted loads of birds including Franklin's and Yellow-footed Gulls and other specialities of the arid soundings including Lesser Nighthawk. back to the relative cool Pacific Coast and the lifers kept on coming with California Gnatcatcher a highlight.

Nice to see the first returning Finsch's Wheatear. and also Greater Sandplover.  Eleonora's Falcon still present and migrating Red-footed Falcons put on a nice show. Good variety seen with a hunting Goshawk one of the best sightings of the week.

Early Spring and bird migration well underway. Lesser Whitethroats were everywhere, hirundines in as were Swifts and Black-eared Wheatears were particularly numerous. Many highlights both common and rare. Semi-collared Flycatchers were very nice to see as well as Eastern Orphean Warbler. Fantastic Pallid Harriers were almost commonplace.

Late Autumn in the birding season - end of October / early November. Good variety of species seen including wintering specialities -  Finsch's Wheatears, Moustached Warbler and Armenian Gulls and a big rarity in the form of a Red-fronted Serin. Eleonora's Falcon still present and they didn't disappoint.

Mid October Cyprus birding where the Falcons stole the show. Plenty of passage Red-backed Shrikes seen and generally a good variety of birdlife on offer.

A trip to see friends and managed some birding connecting with Pygmy Owl and Eagle Owl in and around Helsinki.

Birding the Camargue and Crau in July 2002. A good variety of marsh birds and Mediterranean specialities seen. Highlights for me included Slender-billed Gull, Eagle Owl, Bonelli's Eagle and a variety of Terns.

Birding with friends from UK now living in Germany. The annual trip has produced some very good birding especially at the Waghausel wetland north of Karlsruhe and the north west corner of the Black Forest. Highlights from the trips are to many to mrntion all but include briliant views of Alpine Swift, Marsh Terns, Bluethroat, Citril Finch, Purple Heron and more lately - Pallid Harrier (see below)

An unexpected surprise, here's a bit of a description of a ringtail Pallid Harrier as it flew from the valley over into the Black Forest.

Finally saw a Bearded Vulture on the last day. Good all round birding in varied landscapes with amazing view of a Spanish Imperial Eagle in Extremadura.

Stunning looks at Lesser Kestrels, Spanish Imperial Eagles, Southern Grey and Woodchat Shrikes, plus a variety of birds in this amazing place.

5 species of eagle including stunning looks at Spanish Imperial Eagles. Fantastic birding on the plains.

Good all round birding with sightings of Spanish Imperial Eagles and other raptors, plus a variety of birds seen in and around Trujillo. The Sierra de Gredos produced sightings of Blue and (Common) Rock Thrush, 'no spot' Bluethroat and Ortolan and Rock Buntings.

Visits to this peaceful rocky coastline of the Baltic south of Stockholm. Home to Black Woodpecker, Elk and Caspian Tern. 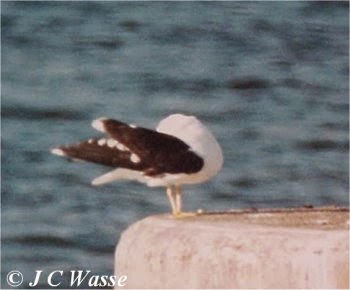 
REST OF THE WORLD

Good birding in sticky conditions connected with Varied Tit, Long-billed Plover, Black-tailed and Slaty-backed Gulls plus lots of other good birds and subspecies.