Yellow-legged Gulls, Caspian Gull and a couple of interesting ones

Successive Sunday afternoon visits to Erith on the south side of the Thames late July into August, mainly coinciding with a rising tide, produced a couple of juvenile Yellow-legged Gulls, one of which very aggressive to other gulls when feeding. An older individual (1st summer to 2nd winter?) made a brief appearance. 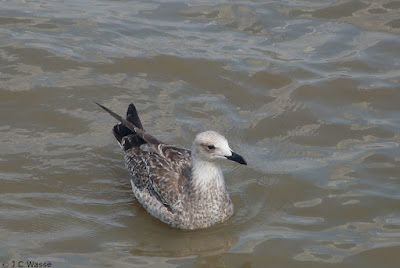 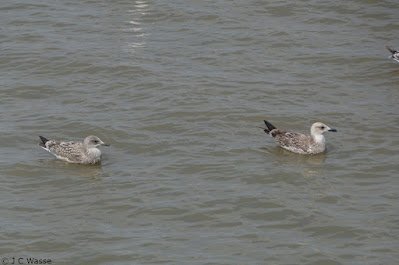 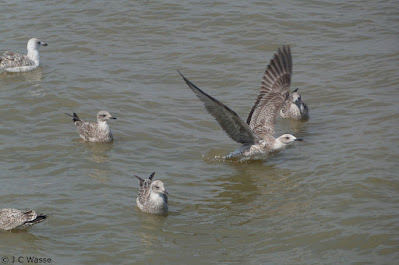 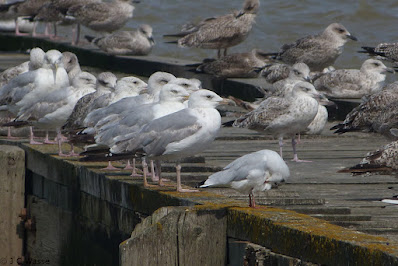 An adult Caspian Gull stayed briefly on one visit, a couple of days after its first sighting. It soon headed down river. 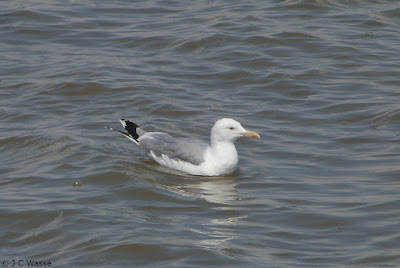 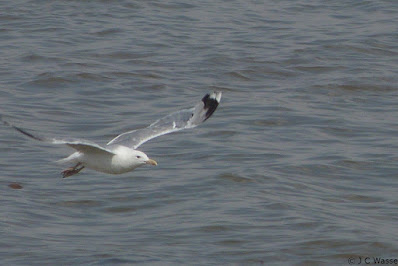 More recently the following juvenile Gull made a brief visit, it headed up river at one point flying alongside one of the young Yellow-legged Gulls. First looks shows scalloped scapulars, dark tertiary block, and a black bill, but was it a fit for Caspian Gull? Maybe at best 'Caspish' Gull, the greater coverts shown in one of the video grabs, particularly the inner ones, not looking good for Caspian Gull. Is the underwing pale enough, or pale in the right places? 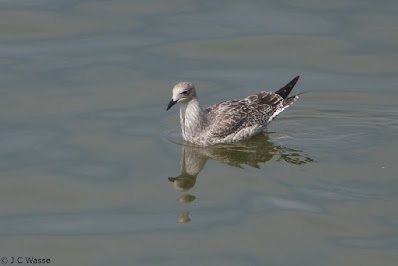 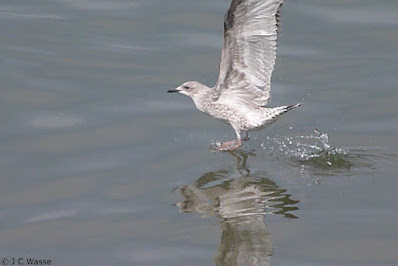 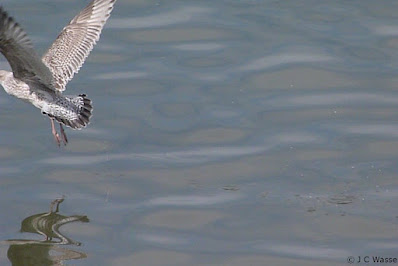 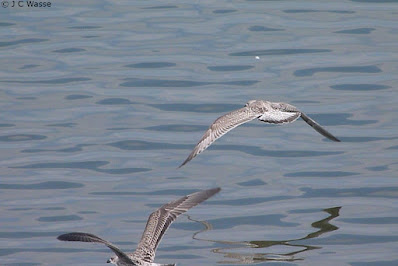 If this was late January and the following Gull was spotted, would it catch you out? I think it has fooled me in the past on Wennington Marsh, though I claim an unsubstantiated two bird theory! The structure and the adult bill betrays it as more than likely a leucistic Herring Gull. Sadly, I did not see it in flight, no sooner had it appeared on the jetty and it was gone. 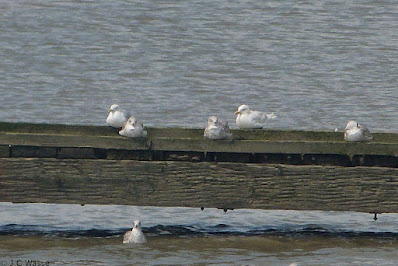 Video footage of most of the above can be found on YouTube by clicking here.

Summer Birding can be a bit of a Battle

Summer birding, a slower pace then the other seasons where the scrub fall silent but Whitethroats and Chiffchaffs are still in there somewhere. The occasional Linnet flies over the local grasslands where a Bullfinch pipes on by and the local Red Kites and Buzzards are overhead occasionally as if out and about on purpose only and not just for fun. The din of Ring-necked Parakeets dominate nearby suburbia and Green Woodpeckers still yaffle on the golf course. In the summer the attention turns to butterflies and dragons. An emergence of Ringlets in June just ahead of the ever busy Marbled Whites who shared the grasslands with Large and Small Skippers. A few Small Coppers seen but Painted Ladies were thin on the ground this year, more common species such as Comma, Red Admiral and Small Tortoiseshell noted. July brought Gatekeepers at every bramble patch, and of the dragons one along a shaded woodland path evaded identity but a few Emperors patrolled the grasslands. Foxes carried out neighbourhood watch patrols after dark, with one bucking the trend. 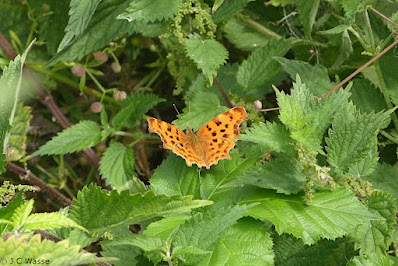 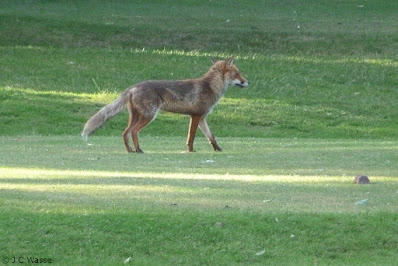 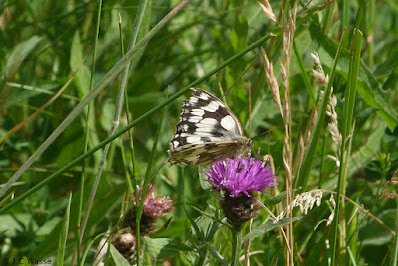 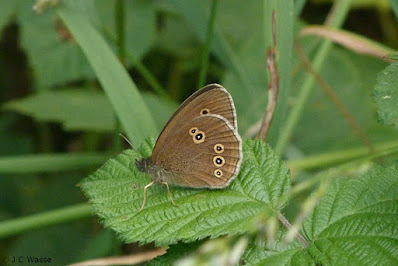 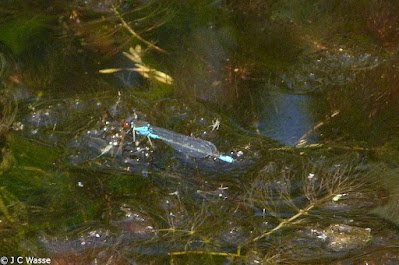 Birding not forgotten at this time of year? Twitched Bempton's Shrike in mid July and dropped lucky as the Black-browed Albatross gave the Gannets a flying lesson off Staple Newk, gliding with bowed wing tips just inches above the sea. Back to the Shrike, what is this Shrike? On comparison with field guide plates it looks like a Red-tailed Shrike (aka Turkestan Shrike) as opposed to Daurian Shrike or an individual with Red-backed Shrike influence. Can such a species be identified in the field without the need for Birding VAR? It is too easy to sit on the fence and wait for the results from the excellent work carried out in Aberdeen. Will DNA be conclusive, or add to the can of worms that is the identification of the 'Isabelline' Shrike complex? 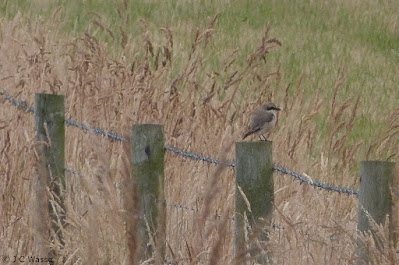 Away from the rare visitors the local Tree Sparrows showed well as did a pair of Yellowhammers, a species I seldom see.

Back home on the moorland edge, the interior temporarily out of bounds due to the fire risk, all four Falcons showed fairly well, two wandering juvenile Peregrines tried their afterburners, they worked, just need to perfect their hunting skills. Same could be said of a Hobby that made three unsuccessful sorties through gathering Swallows and House Martins.

Visited Norfolk's breeding Bee-eaters and up to four showed on and off about the quarry. The highlight was to listen to that distinctive 'prrrp' call, all too synonymous with the Mediterranean. A Hobby wasn't made welcome but it soon moved on. 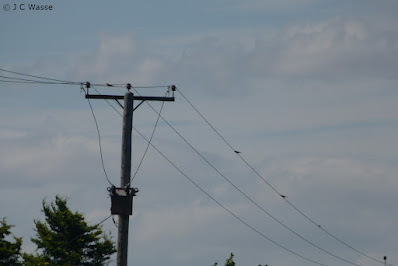 At Rainham RSPB the reserve is tinder dry apart from Aveley Pools which was a magnet to Grey Herons, Little Egrets and visiting Spoonbills, not to forget the giant of a Great White Egret, a species that can be elusive here. 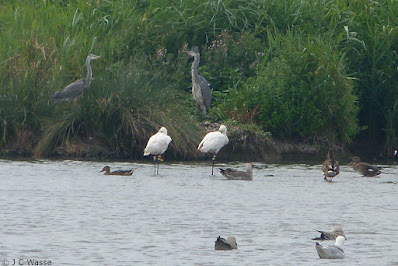 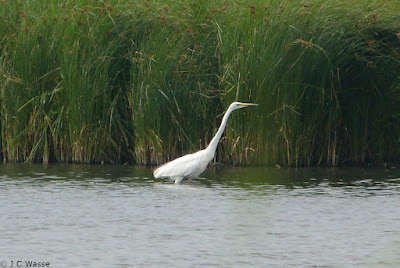 A non birding trip by train to Battle and Hastings in early August was nice, disappointed that the entrance fee to the Abbey and Battlefield wasn't £10.66. A Green Woodpecker called from the Battlefield and several Hawker dragonflies were probably Migrant Hawkers but they never settled. 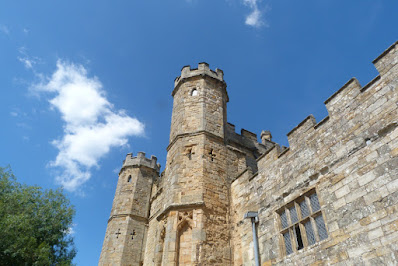 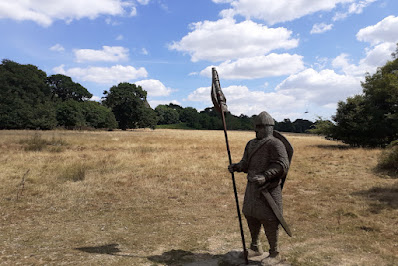 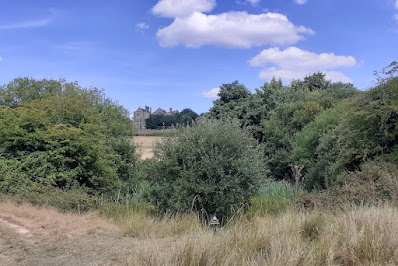 Down at Hastings the loafing Herring Gulls on the shingle beach attracted at least 2 juvenile Yellow-legged Gulls early evening. Despite encroachment our fish and chips were not on offer! 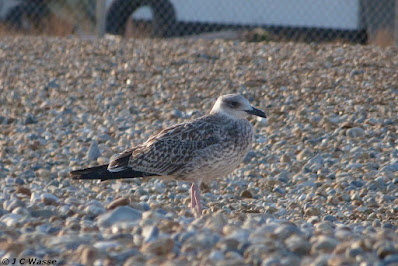 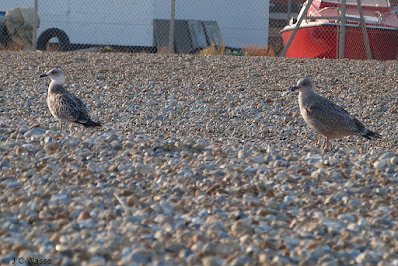