World Series of Birding - 1000birds now in the champions league of birding?

I've been lucky to travel from the UK to Cape May, New Jersey (NJ), USA for birding many times since the turn of the century, initially in Autumn but with a recent focus on Spring. Over the years I have met some cracking folk, birders and non birders, and on occasion a character or two!

A running joke I have with my friends at Stockton Inns is that until this year I've never had a rental car with a NJ plate. (There was one other but it doesn't count as it broke down before leaving the rental parking lot at EWR!) On this topic of car number plates, bear with me, as this takes me back to the time I first bumped into Nick Kontonicolas one autumn morning in the early 2000s. This was at Higbees at Cape May the place for the morning flight of passerines reorientating themselves for a while on their migration south. Nick saw my car and commented that I had come a long way, I think the car's plates were from Connecticut or nearby. I replied that I had travelled a little bit further... from across the pond.


Over the years I bumped into the same as well as new birding faces and one year Nick asked if I was interested in taking part in the World Series of Birding. I had never contemplated birding Cape May in Spring as it was always known back here in the UK as an Autumn place, specifically for seeing migrating raptors and warblers. I was interested and was pleased to join Nick's team, Team 1000birds in 2007, for the 25th annual World Series of Birding. His team's first race being the previous year.
Disappearing Cattle Egrets:

I have been very happy to have taken part in 10 races with 1000birds and have enjoyed both the race and helping with the scouting. This usually means arriving the weekend prior to the race, or early in the scouting week to cover the birding route in Cape May County. The ups and downs on the race days vary each year, where do the Route 9 Cattle Egrets hide, and that marsh had Northern Harriers on every scouting visit, but why not on race day? All teams have such stories to tell and happier ones which for our team included the Black Rail greeting us in full voice a few years ago on the Delaware Bayshore. With the change in rules we could and did enjoy sharing this scarcity with other teams. One constant with each race is that the camaraderie remained strong each time in our team.

During the visits I have seen the effort and dedication all members (current and past) have put into the scouting, detailing sites and back up locations down to GPS precision and applying extensive thought to the route timing. Notwithstanding the efforts of current team members, for many years the dedication of Bob H has been second to none. Weeks of planning both at the desk and in the field and receiving encouragement and guidance from legends of this competition, especially contacts at DVOC including Bert F. Our scouting has been no mean feat as team members each year have juggled their finances and like other teams have taken time out of their respective working and home lives to independently undertake the scouting, raise sponsorship for a variety of causes and of course take part in the race. Our aim has always been to have fun, challenge our totals from previous years and when possible raise funds through sponsorship and try to compete with our contemporaries.

The team membership has varied over the years and it has been a great effort of Captain Nick to get us all together. In the main the focus has been on the State run, home of the first prize the coveted Urner-Stone Cup. This year we were very happy, perhaps surprised, to have come top in this category and very happy for Nick to take the trophy home. (After 12 years or so of trying, not 22 years that has been reported!)

Please give a warm round of applause or exclaim a big cheer (for those familiar with BBC Radio Sheffield's former programme - Clueless - imagine they've just found a clue) to my fellow winning teammates of this year, Marc C, Ken W and Captain Nick K.

I hope our win has given inspiration to ANY team contemplating taking part in the World Series of Birding. You can do it, you can win it! Don't let anyone tell you otherwise! You don't have to be superstars, just be keen, be lucky and remember to have fun.


Congratulations to all teams that took part, be it those recording big numbers, little numbers, big pledges or small pledges and good luck to future participants young or not so young. I'm sorry I missed the awards brunch this time. Dipped that Warbler in NYC!

World Series of Birding 2018 - Summary:A full trip report from this 2 week birding trip to come in the summer months. Please keep an eye on my birding blog. Here's a summary of some of the stops. 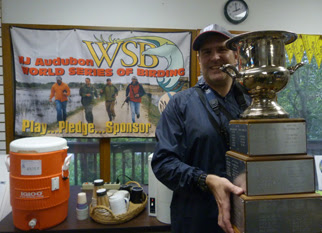 Spring Bank Holiday and back home on the magical South Yorkshire moorlands. One of the many highlights being an Osprey moving NW along the moorland edge on the Monday having been seen off by a small Falcon and then a Buzzard. With thanks to the small Falcon whose id we (my dad, SG and myself) were trying to confirm got me on to the Osprey. The Falcon was in the process of mobbing a Buzzard and after several passes it made another swoop. I was now zoomed in on the scope and this time it's target was something different, a raptor with long primaries that had appeared low over the ridge. It had shocking white underparts contrasting with uniform brown upperwings and a white (masked) head. Not another one :) my 3rd of the year in these parts!

I pulled away from the scope and was surprised no one had shouted it out, but SG and my dad were looking at the Buzzard. By this time another Buzzard flying low over the hill added to the momentarily confusion. I shouted Osprey going right and they quickly got onto it as it glided along a ridge, and then one of the Buzzards decided to chase it off. Poor thing, it was only looking for a thermal to drift off north! In the melee the small Falcon remained labeled as such. Back on Terra Firma a pair of Ring Ouzels showed well during the visit.


Away from the moorlands twitched the Temminck's Stint at Old Moor RSPB on the Saturday (a most welcome Wath Tick - number 192) where a smart Black-necked Grebe played hide-and-seek on Wath Ings. Near the visitor's centre Dingy Skipper butterflies were showing well, a lifer! 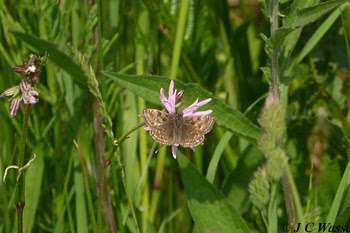 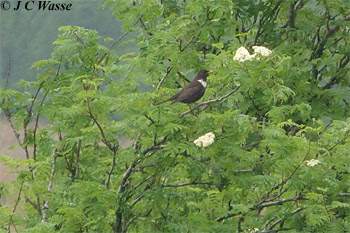 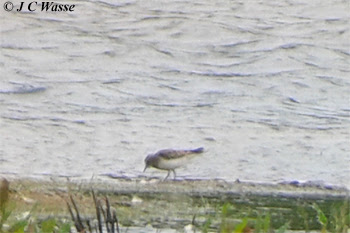 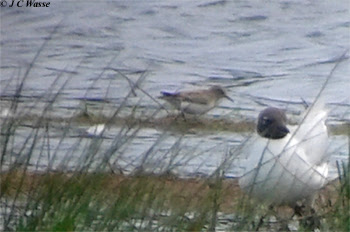 An extended weekend visiting friends in Germany followed. Bad weather was forecast but this turned out to be way off the mark, although the first night yielded a cracking thunderstorm in the early hours. The rest of the time it was warm with in the main, sunny skies during the day, although a rogue shower struck northern Karlsruhe Friday tea time!


Onto birding where the wonderful Waghäusel wetlands yielded several pairs of breeding Purple Herons and a couple each of (passage?) Spoonbills and Great White Egrets. Garganey present were quickly adopting eclipse plumage by this, the first weekend in June! White Storks dominated the skies where both Kites and Buzzards flew and from where a lone Hobby investigated the first pool. By the sides of which a family party of Wild Boar minded their own business, but a Fox in the undergrowth piqued the attention of the ducks sleeping on the muddy shore. Dragonflies over the pools were dominated by the presence of Black-tailed Skimmers, but we managed to see singles of Scarlet Chaser and Lesser Emperor and a new species of Damselfly for me, Red-eyed Damselfly. The Bluethroats were silent and didn't show this time, but a Savi's Warbler buzzed for a few minutes from somewhere deep within the far reedbed.


Highlight of the trip was being able to study several Lesser Purple Emperor butterflies, with most found along the hedgerows bordering the small holdings and woodland edge several kms further south within the Stutensee area. Also present here were several Red-backed Shrikes (4 or 5 territorial males), a Golden Oriole was seen to disappear into the Poplars and both Common and Black Redstarts were present and in song. The latter also a common sight singing from roof top aerials in the town. Of note and much further afield to the north Bee-eaters showed well at a disused sand quarry in the rift valley, giving stunning views from a hide.


With warm thanks to friends Chris and Sue for their kind hospitality over the weekend. 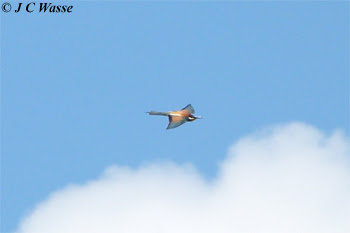 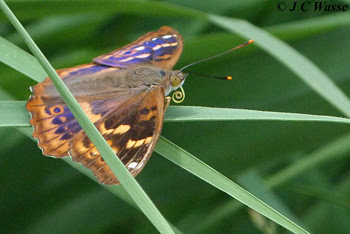 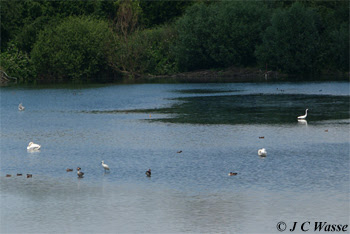 More photos from this latest trip at the Germany pdf file (2000 - date) located at 'Birding Trip Reports - Other'. Just click on the tab at the top of the page.
Posted by J C Wasse at 10:29 am