Not a footy score between a couple of non-league teams but the number of visits I made to each birding area one week in mid-September, a summary below.

Kilnsea/Spurn
Three visits to Spurn. Attended the Spurn Migration Festival (Migfest) on the Saturday, a day of persistent rain. Birding a little slow but the diminutive Kentish Plover at Kilnsea Wetlands was a big draw, a good Yorkshire tick for me and many others, and the first in the Spurn area for over a decade. The Mig Fest was well organised and well attended and looking round the fantastic displays at the Westmere Farm base and meeting up with folk took the mind off the bad weather. The talks in the day and evening lecture were top class. Fascinating to hear about Cellular Tracking Technologies being used across the Pond to track bird movements and the potential for using miniature tracking devices on smaller species (Michael Lanzone). The evening lecture 'A Tale of Two Peninsulas' was well entertaining and informative. Even though I've been to Cape May nigh on 20 times I'm still learning about the place, and got a good answer was forthcoming as to where the blooming Route 9 Cattle Egrets disappear to on World Series of Birding day!

Happy to talk on and on about Cape May to the cows come home, here's a taster, check out my trip reports from both Spring and Autumn and a couple of recent birding videos.

Falsterbo has always been described to me as a bit like Cape May, would like to visit one day to see the raptor migration spectacle. Nice to have a side by side comparison with the NJ counterpart,The lecturers David La Puma and Bjorn Malmhagen from Cape May and Falsterbo respectively, surely The Two Ronnie's of the birding world!

Good to catch up with the Spurn folk from Wath days of old, plus friends from Cape May. Hope they enjoyed the Yorkshire hot spot and cemented the formal Friendship Agreement of the three Capes. Cheers to all who made the event a continuing success and especially to Andy R for signing a copy of his cracking book - Birds of Spurn.

Visited Spurn on the following Wednesday and Friday. The least said about the latter, let's say I'm sticking to Tetley and Yorkshire Tea, not the one beginning with 'P'. The former was more enjoyable as friends Ruth and Mark from Rainham were in town, birded Kilnsea and down to the Chalk Bank with them. Nowt moving passerine wise, but we had cracking views of a Merlin at Kilnsea Wetlands, it spooked the long staying Wood Sandpiper, and a brief Hobby flew past the nearby radar dish. 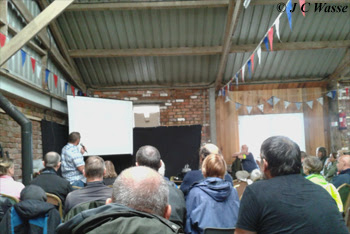 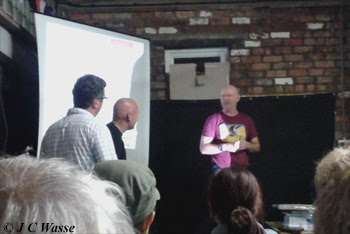 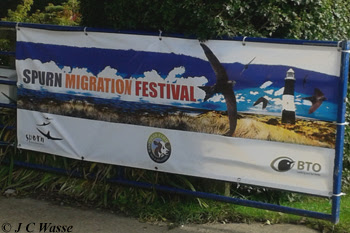 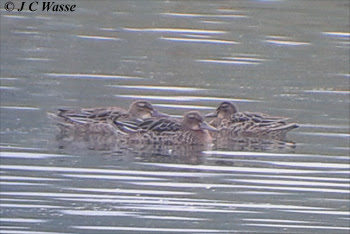 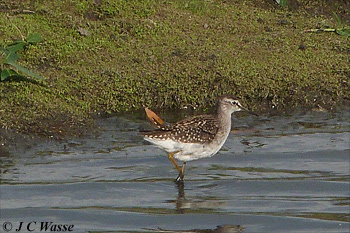 Moorlands
Interesting spread of temperatures as low as mid teens on some visits at the end of week but one day mid week it was touching blooming 30! Birded the area with my dad and saw a nice variety of resident and passage birds. One day saw a strong southerly movement of Swallows, one of which evaded a lightening strike by a Merlin. A probable Hobby too distant to clinch in a dogfight with a Kestrel and another visit produced a Peregrine tracking a Buzzard over woodland before gliding away into the ether. Kestrels were numerous throughout as were Buzzards, and one day at the end of the week saw a noticeable appearance of Sparrowhawks, 3 over one hillside. Raven sightings on all visits and a passage Marsh Harrier added to the variety on the Sunday (18th), it was moving through very very high up! Mistle Thrushes flocking, Meadow Pipits calling overhead and a flock of Wigeon through were signs of autumn. Nearby on the upland edge an immature Yellow-legged Gull tried to hide itself amongst a flock of LBB Gulls at Ingbirchworth Res. and a pair of Little Owls sunbathed at one location as a cycle race passed along the criss-crossing country lanes. 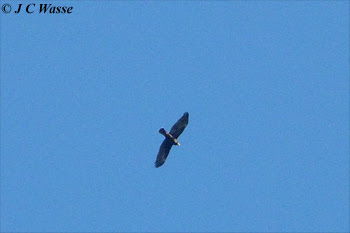 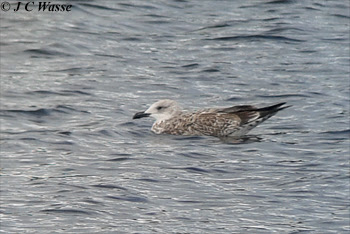 Twitching
Caught up with Baird's and Pectoral Sandpipers at Hatfield Moors, South Yorkshire, the former another Yorkshire tick of this trip back home. A Peregrine flew over and Black Darter dragonflies along the track to Packards were new for me. Relatively close by was Alkborough and it's attendant Western Swamphen. It showed briefly at distance from the Horse Paddock with up to 7 Spoonbills frequenting the main pool. 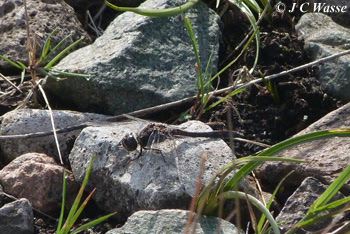 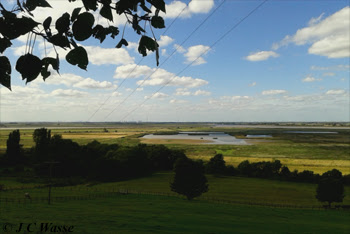 Saturday 27 August saw me birding at Spurn, East Yorkshire. Migration highlights included a cream crown Marsh Harrier south over the Humber with the Kilnsea Triangle holding several Whinchat, Common and Lesser Whitethroats, Willow Warblers and a Redstart. Waders were plentiful with a walk over to Kilnsea Wetlands/Beacon Lane Ponds producing loads of Dunlin with others of note including Greenshank, adult and juv Curlew Sandpipers, Wood Sandpiper and Little Stint. Beacon Lane itself was quiet although nice to see Wall Brown butterflies. Prior to a late afternoon seawatch an immature Skua spooked the waters on the Humber shore and headed out to sea at The Warren. Immature Arctic methinks, photo below. It looked big to the observers, but I'm favouring Arctic. It was a question of getting a photo and analysing the photos or studying the bird as it flew over, the former won out. The seawatch produced a slow trickle of Common and Sandwich Terns south and a Black Tern was amongst them, but heavy rain soon set in and ended the show for me. 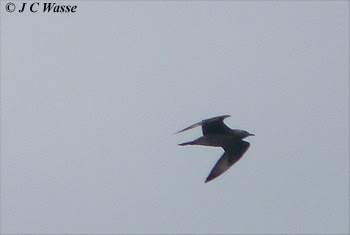 Sunday 28 August and an afternoon seawatch at Flamborough Head, East Yorkshire. A slow session despite NW winds but connected with about 10 Arctic Skuas and a handful of Great Skuas heading south, with no more than a handful of Manx Shearwaters noted as well. Waders on the move included Whimbrel, Curlew and Golden Plover. Nice to catch up with the locals et al. Love seawatching and always learning!Monday 29 August and birded the Barnsley moorlands with my dad. Spotted an adult Caspian Gull amongst a group of LBB Gulls resting in fields near Ingbirchworth Res., South Yorkshire, and nearby watched for migration along the moorland edge at Ewden Heights and then at Midhope Moor. Simmo and Upland Tyke were watching from the Cabin up the valley and connected with an Osprey which eluded us at Midhope Moor. Other highlights included Marsh Harrier and Hobby plus Buzzards and Ravens. 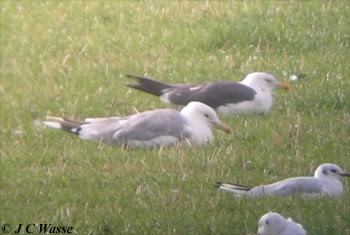 Tuesday 30 August and a repeat of the above, except birded from Ewden Heights only after visiting the Ingbirchworth area. The Caspian Gull was again near the Res. before flying high east about 10am ish, leaving the area? Simmo again birded from the Cabin. At about 11:30 I picked up what I thought was an immature 'Gull' over the ridge leading East from Ewden Heights and I was about to move off it as it seemed to be going away when something kept my interest in it. A nagging doubt on its id. It soon turned and revealed itself to be an Osprey. It then came towards us (photo below) and I managed to call Simmo who got onto the bird before it bombed south towards Agden. Soon afterwards a 'new' Marsh Harrier appeared and went high south, at least 1 or 2 others lingering here. 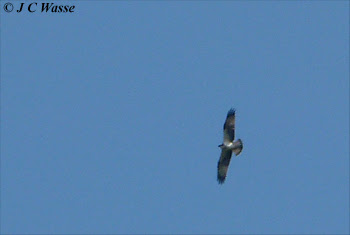 A relaxing afternoon at home before driving to London was stopped in its tracks when news of Purple Gallinule (OK let's be fashionable and call it 'Western Swamphen') at Alkborough Flats on the Lincolnshire side of the south Humber shore to the north of Scunthorpe. Connected with this beast just before 17:00, it dwarfed a Moorhen. The scrape held a nice selection of waders with many Avocets and Spotted Redshank noted amongst others. 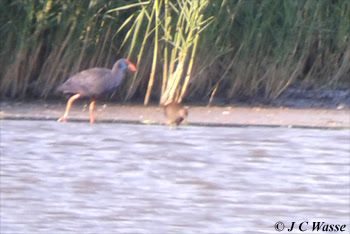 As always a fantastic stay back at home.