A bright warm start and raptors were moving around in the NW part of the island. I did a watch for about 90 mins from 09:00. A ringtail juv. Harrier went so high over I was lucky to get bins on it let alone give it a name. A cc Marsh Harrier was lower down. Several Kestrels appeared to move in from the coast about 10km to the north and similar in offs were singles of Hobby and Peregrine. In the unsure if locals or migrants category were 2 adult type Bonelli's Eagles that put on a superb show (though the local Jackdaws may disagree) and 1 or 2 Long-legged Buzzards. At least 2 Alpine Swifts seemed to set the altitude record making the flocks of Bee-eaters look cumbersome in flight by comparison.

Wow factor of the day surely the 200 Red-footed Falcons at Mandria near Paphos of all plumages. They shared the fields with 2 or 3 Rollers and nearby Whinchat (10), Northern Wheatear (3) and Short-toed Lark (5) sat sentinel like in a ploughed field by the beach.

Stunning scenery and easy to travel around, my immediate thoughts of Cyprus. Based to the NW at Droushia. A few lifers so far inc. Cyprus Warblers in company of a pair of Sards, brief looks at a winter plum. Cyprus Wheatear and Spur-winged Plover. The best to last. Eleonora's Falcon. Wow!!! Seen at least a dozen at 2 sites between Paphos and Limassol today. Not enough adjectives to describe them, surely the ultimate Falcon, what a flyer! Disappointed with the sea watching, looks a waste of time at this part of the year.
Posted by J C Wasse at 8:34 pm

Sat 20 Sep 2014. Went to Sheffield Wednesday ticket office to get the fast selling out tickets for today's game at home to Reading. Then sent out this tweet.

Within half hour something 'daft' had turned up with news breaking of Britain's 3rd (and Yorkshire's 1st) Masked Shrike at Spurn (Kilnsea). Always regretted not twitching the first GB record in Scotland. Twitched the Spurn bird with my dad (and saw G G Shrike). We got back to Hillsborough just as the match kicked off - ended up a scrappy 1-0 to the Owls.

Sun 21 Sep 2014. Back to Spurn and got some photos and video of the cracking Masked Shrike and connected with R B Flycatcher and Barred Warbler. Probably heard Y B Warbler around Kew but it sounded off just once late pm. A last hour seawatch produced a handful each of Sooty and Manx Shearwaters north, several R T Divers south, and loafing Little Gulls inc a flock of 40 at distance. Good to have a natter with a few faces from days of old.

Friday 19 Sep and off to the Yorkshire coast. Castle Hill at Scarborough (13:00 - 14:15) held a striking Firecrest and calling but elusive Yellow-browed Warbler. The multiple Red-breasted Flycatchers had gone to ground. The one nearby at Crooks Ness, Burniston (14:40) showed well (photo below) and this gully hosted Spotted Flycatcher, Blackcap and Whitethroat. At Flamborough (16:30 - 18:10) saw 2+ RB Fly's within walking distance of the headland car park and a couple of Yellow-browys. Lesser Whitethroat, Goldcrest, Chiffchaff and Spotted Flycatcher added to the variety. 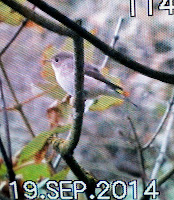 Thursday 18 Sep and up to North Norfolk. Warm inland on the drive up and a Hobby was hawking insects over the road near RAF Lakenheath, Buzzards soared over the A148 nr Fakenham but on approaching Cromer the sea mist and drop in temperature hit home. By the pier the adult Caspian Gull (Photo below) joined Herring Gulls briefly on the beach before resting offshore. Heard mutterings of hybrid on t'internet but can't Caspos be variable like Herrings? Off to Salthouse and the Barred Warbler (photo below) showed reasonably well at Gramborough Hill. Final stop Stiffkey. A couple of Bramblings were in trees by the saltmarsh car park with Chaffinches. Little Egrets in the salt marsh as was a Spoonbill. 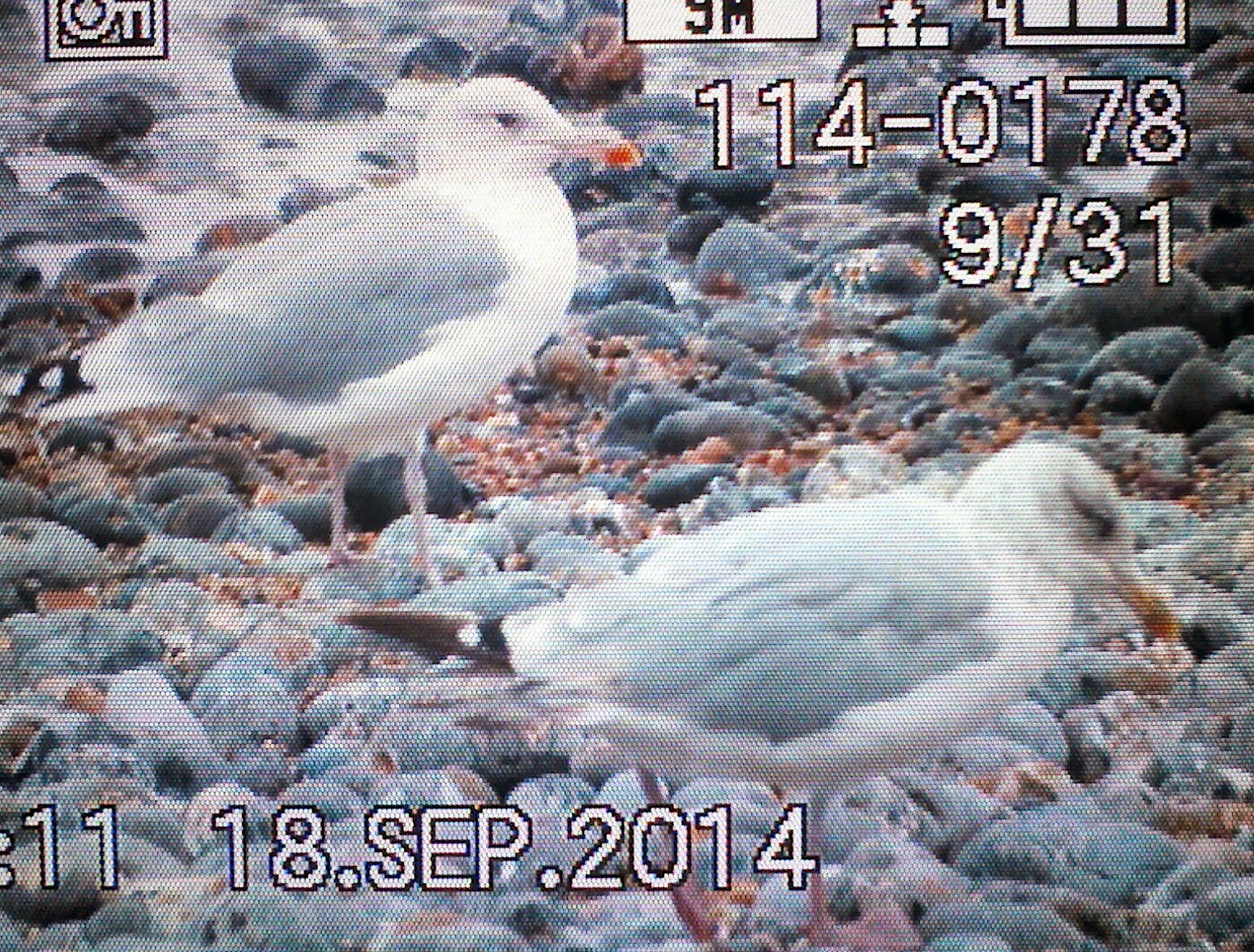 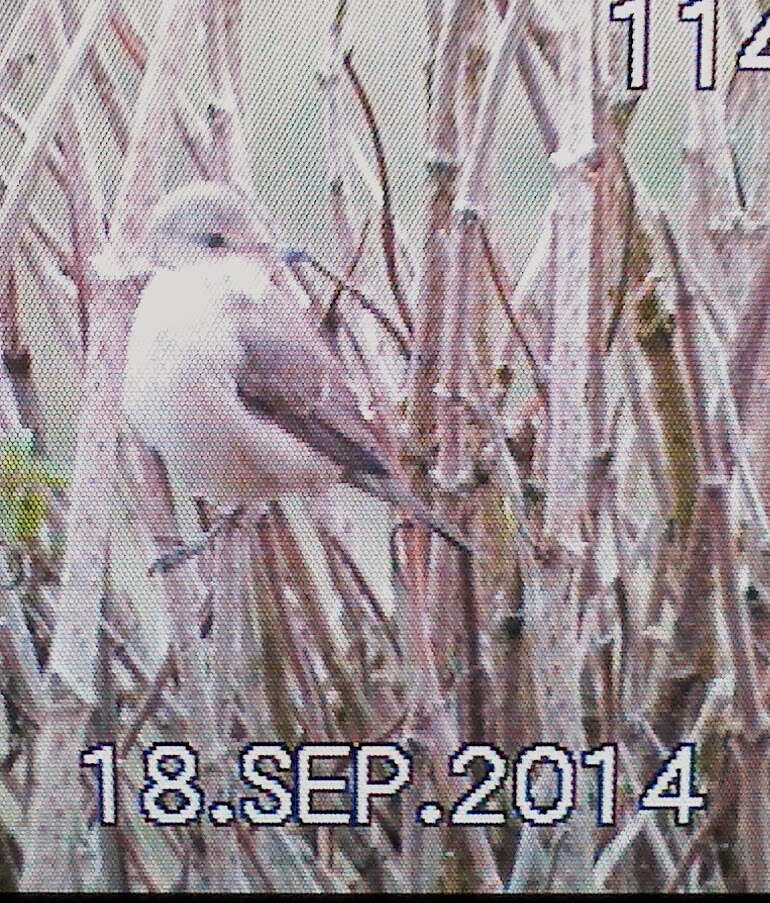 A double visit this weekend. Weather dominated by a NE wind lasting both days and stronger on Sunday. Essentially dry but at times partly cloudy with sunny intervals in the afternoons.

Highlights from Saturday included brief views of single juv. Arctic Tern and a lone juv. Common Tern moving upriver in the afternoon and hunting Hobbies (adult and immature) over Aveley Pools. Common Buzzard and Marsh Harrier present plus a Peregrine drifted over, briefly in the company of a (brave) Kestrel. At least 10 Black-tailed Godwits in Aveley Bay with some on Aveley Pools alongside Green Sandpiper and Snipe. Duck numbers building up with Teal everywhere, 4 Pintail and double figures of Wigeon on Aveley Pools. One of the last of the Tall Ships visiting London headed downriver.

Highlights from Sunday included a "long-billed Dunlin in Aveley Bay sharing the mud with Teal and the 10 Black-tailed Godwits and for me a stunning Yellow-legged Gull at Coldharbour Point alongside a colour-ringed Herring Gull (white ring A7HR). Marsh Harrier and Buzzard seen again plus a flyby of a Clouded Yellow and a slightly more obliging Painted Lady in the vicinity of Aveley Bay. The 2 Lancaster Bombers flew north from Kent heading past the Dartford crossing during the afternoon.

Back in London I had a look at the sea of poppies in the Tower of London moat, pretty spectacular, as was the Tour of Britain which was coming to an end in the capital.