Birding Broomhill Fash and Worsbrough Country Park on Sunday 09 July 1989 produced some nice sightings including a returning Greenshank, summering Common Terns, a selection of Warblers and Ruddy Ducks, remember those?
All of the above were overshadowed by the news of a Blue-cheeked Bee-eater present on the Yorkshire coast. Sage words from local birders to my dad was to go and see this once in a lifetime sighting in GB!
The trip in the afternoon seemed to take an age, it was the afternoon of the Wimbledon's Men's singles final Becker against Edberg, but we found the site fairly easily to the south of Hornsea near Mappleton soon joining a bucketful of birders scoping a hedgerow. There it was perched in the hedge and with mum and dad watched it for an hour from 17:20. It spent most of its time sat in the hedge but occasional hunted Bees from a telegraph wire. Stunning plumage and a massive rarity, the 'record' photo below does it no justice. 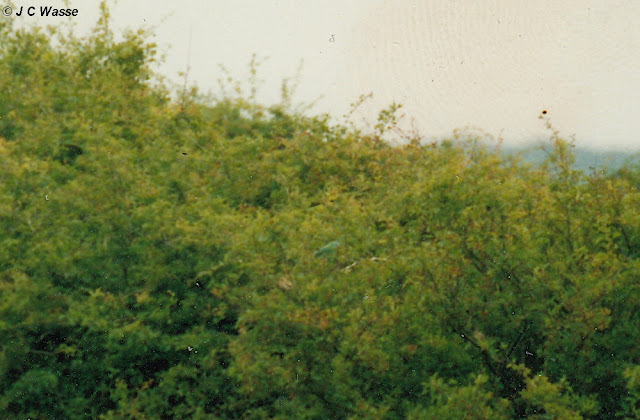 Many, many years later and my next encounter of this species was at Phassouri Reedbeds, Cyprus in April 2016, where a group of 3 spent some time on passage hunting from the reedbed fringed channel. What struck me about them was the behaviour, almost reluctant to fly, spending most of their time sitting on the reed tops. Could be easily missed, I remember a conservation working party putting me on to them when I was in the area. Were they not active and resting having crossed the Mediterranean Sea, or is this a trait of this species compared to European Bee-eater, that seems to be here, there and everywhere? 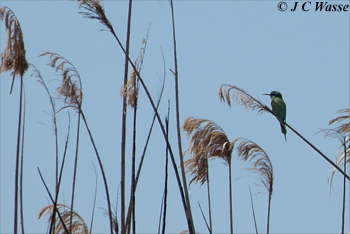 The best views I've had to date were back on Cyprus in March 2018 when birding the archaeological complex at Paphos Headland late one afternoon. A glance to the southern end and a Bee-eater sp. was in flight, fresh in as not seen when in that part of the site about half an hour earlier. I rushed down the path and had a fantastic look at the Blue-cheeked Bee-eater shown below. This one spent most of its time hunting from a tree for which it then then settled upon. I gave it some space leaving it resting on the tree, and continued walking the rest of the site. 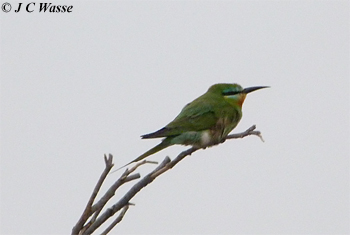 We were down at Broomhill Flash late afternoon on Saturday 24 June 1989, instead of being on site the following morning, family day trip to Bridlington on the Sunday. Timed it nicely as found out exciting news from Mick Turton of an immature male Montagu's Harrier present earlier that day up on the moors at Midhope.
Fast forward to early the next day, just after 6am, and we were overlooking Midhope Moors, viewing the area below Pike Lowe from the bend on the road where the track starts leading down to the back of Langsett Reservoir. You know the place, it's where there's space for about five cars but fast forward thirty years and you now expect a dozen plus present, with parked cars digging up the roadside verge up and down from this spot.

It was a fine sunny start to the day in late June, nobody about and the air filled with the calls of Lapwings. A few minutes later there it was hunting just over from the bottom of the first field just below Midhope Moors. A beautiful delicate Harrier patrolling the field edge much to the annoyance of Meadow Pipits, one of which buzzed it continuously. The raptor characterised by a distinctive upperwing pattern, three toned, predominantly dark grey with a distinct dark secondary bar and slightly paler dark primaries. It had a grey head, I noted not as clear cut as an adult male Hen Harrier, and having distinctive grey central tail feathers. It was on show for 10 minutes hunting the field and then continued on what was its final pass heading right (north-west) behind the wood towards North America farm. I managed to get the record shot below, not brilliant, a bit out of focus. 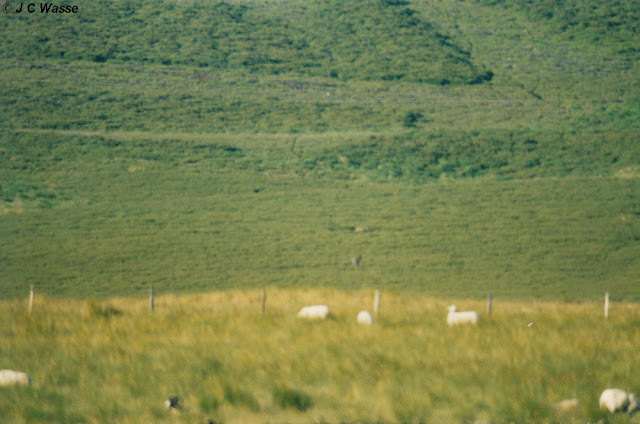 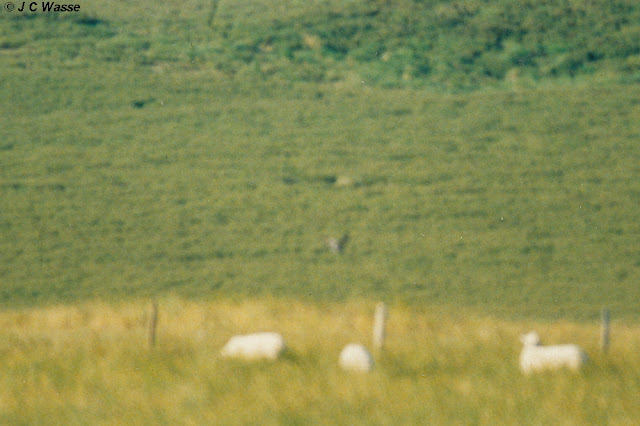 The only 'Monty's' I've seen on the moorland edge, and in the Barnsley birding area over the years. You could say that 'Monty's got a raw deal' as the chances of a future one on Spring passage are slim given the decline of this waif to these shores over the last decade or so. Will still keep looking though.
Before going to Brid. and being an age before social media we went down to the hide at Broomhill Flash to scribble in the notebook that it was still present early Sunday morning. Shame it didn't linger.
Always like to watch Harriers, the male Montagu's Harrier below was a Spring migrant over a hillside at Anarita Park, Cyprus in 2019. 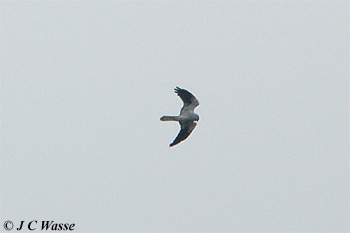 Birding Blast from the Past 4 - Purple Heron, Wath Ings, South Yorkshire, Sunday 21 May 1989

Sunday 21 May 1989, a warm and sunny day in South Yorkshire, birding The Wath Area with my dad. Broomhill Flash hosted a couple of Little Ringed Plovers, several duck species, a Cuckoo, Swallows and Swifts airborne plus a more stationary Little Owl. Looking though my notes and a Turtle Dove was also present. We saw a drake Garganey over on Wombwell Ings.
A nice morning of Spring birding and we went off up to the Wintersett Area where we had a lot of singing Warblers around Cold Hiendley Reservoir, with nice views of Garden Warblers and Lesser Whitethroat. Returned to The Wath Area to news of a Purple Heron being found at Wath Ings. Sadly we dipped in the morning but after returning home received news later in the day that it had been relocated, viewable on the main marsh. We twitched it in the evening and had decent views of the snake like neck and head of this 'lifer' in the reeds, the record photos below showing its secretive nature. I believe at the time it was the 1st for the Wath Area and the 3rd? for the Barnsley Birding Area.
With thanks to all involved in the finding and in passing on news. 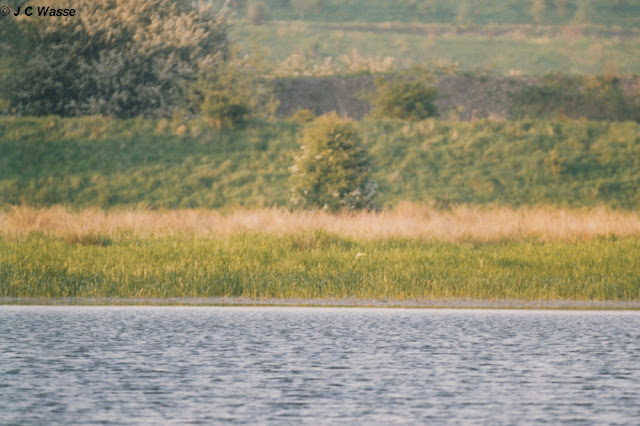 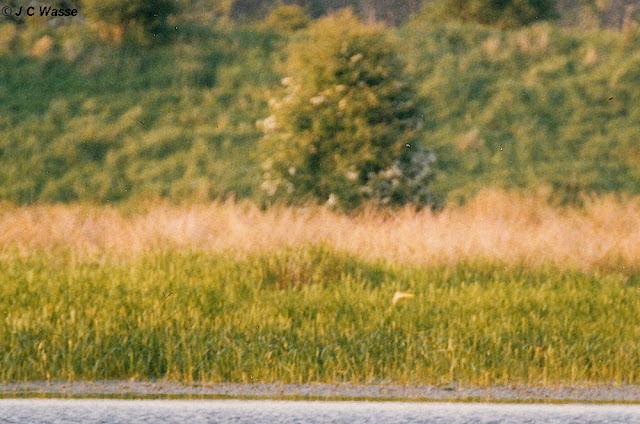 I've been lucky to see several Purple Herons in GB since and most have been secretive, typical of the species. Best views to date have been overseas at a breeding colony at Waghäusel, Baden-Württemberg, Germany, where you can have good views of the tower reedbed nests characteristic of this beautiful Heron. 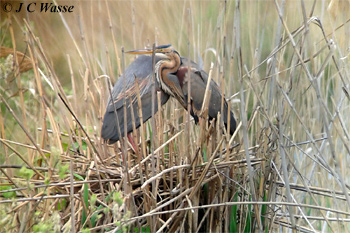