First trip over to Germany (Baden-Württemberg) to see friends after the pandemic. A nice trip, good to catch up and the birding wasn't bad as well. A little cooler than usual for the end of May, especially so on visiting the Black Forest. Dry throughout apart from a brief shower on the Saturday and then on Sunday morning.
Black Forest and WeingartenermoorBirded several sites at the NW corner of the Schwarzwald, and first up the woodland edge along the Black Forest High Street around the Hotel Schliffkopf. Tree Pipits sang from their lofty perches against a leaden sky on this cold Friday with Willow Warbler and Dunnock song providing a backdrop. The birding was slow, a pair of Hawfinches flew by and a group of 6 wandering Crossbills allowed a longer study. A Woodland Ringlet seemed to be struggling in the light but biting N wind by the track, but perked up when the sun broke through. Grey Wagtail singing at the nearby Ruhestein National Park Centre was a little unexpected and the final stop around the cafe of the Siebelseckle ski lift produced singing Black Redstart and White Wagtail. No Ring Ouzel as seen previously and the cool grey conditions produced no raptors, Pallid Harrier moved over here gliding up from the Rhine rift valley on one visit in April 2014. Whist birding may have been disappointing, the same cannot be said of the local cherry cake which showed well, briefly.
Heading north back towards the Karlsruhe area and back in the Rhine rift valley, we stopped off at Weingartenermoor an area with woodland trails and a lake hidden within, with the exterior characterised by smallholdings and a wooded hillside to the east. It was as if it was a different day, mainly sunny skies and feeling warm late afternoon. The woodland had many Blackcaps and singing Short-toed Treecreepers, the lake mainly held Coots and a few ducks/geese with Red Kites overhead. On exiting the trees Common Buzzards could be seen circling the hillside where a silhouetted Honey Buzzard flew along the treeline giving a 'wing clap' before drifting into another shallow valley. A Grey-headed Woodpecker gave perfect flight views on flying out of the woodland, the smaller size, more in proportion structure than its larger Green cousin obvious, more subtle rump and of course, a distinctive grey head.
WaghäuselThe marshland to the north of Karlsruhe, a famous birding site especially popular to see Purple Herons. A visit on the Saturday lived up to expectations. Purple Herons attended their tower nests, Marsh Harriers hunted the reedbed which held an elusive Great White Egret and summering Bluethroats. At least one of these relatives of the Nightingale sang from cover as the day cooled, showing mainly at distance whereas Common Nightingales were almost exclusively hidden in the thick scrub, one flying across the path providing the only view. Back in the reedbeds Reed Warblers were common, Bearded Reedlings less so, and a reeling Savi's Warbler popped up for a bit. Cuckoos were everywhere, Turtle Dove noted and the nettlebed areas held singing Marsh Warblers. Overhead Red Kites, Black Kites, Common Buzzards and Hobby shared the skies with White Storks. Back at ground level Black-necked Grebes were very surprisingly not noted, were they hiding away? Plenty of Red-crested Pochards and Common Pochards present as was a lone drake Garganey. A clearance in the reeds held Greenshank, Lapwings and Little Ringed Plovers. A pair of Black Woodpeckers in flight to nearby woodland was a nice surprise, one of which showed later atop a pine tree at great distance. 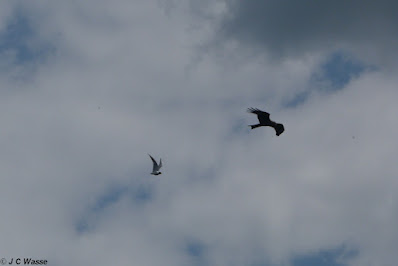 North of Karlsruhe
The smallholdings and paddocks that are dotted across the countryside, edged by woodland are characteristic of the rural areas of the Rhine rift valley. A local walk on the Sunday yielded a handful of singing male Common Redstarts in small orchards, their Black Redstarts dominate nearby suburban roofs and TV aerials, and the hedgerows held 4 territories of Red-backed Shrikes. Great Spotted Woodpeckers were everywhere and a couple of Green Woodpeckers flew by. A male Golden Oriole sang from somewhere within the Poplar canopy of the woodland edge, the woodland holding Chaffinches, Blackcaps, Chiffchaffs and shy Hawfinches amongst other species such as Blackbirds and Song Thrushes. As the morning brightened up White Storks circled the villages, as did both Red Kites and Black Kites and Common Buzzards.

A nice long weekend, many thanks to friends Chris and Sue et al. More photos and sightings from many trips to this part of Germany can be found at Birding Trip Reports - Other.
Posted by J C Wasse at 9:34 am