The Honey Buzzard of my previous post seen moving south along the South Yorkshire moorland edge at the beginning of the month was a little unexpected so early into the birding autumn season. Raptor migration takes shape later in the month in the UK and into September. August is a time when birders focus upon the arrival of passage waders, a time to take in seabird movement as it develops on the east coast, and with thoughts of adding continental passerine drift migrants to a year list as the month progresses.
Of passage waders - throughout August around 50 beautiful Black-tailed Godwits moved between the Thames shore and their high tide roost of Aveley Pools at Rainham Marshes RSPB on the eastern edge of London. One visit saw 2 Avocets and also 2 Greenshanks to be found on the same pools sharing the space with many eclipse ducks as well as 11 Dunlin, several Common Sandpipers, 3 Ruff and a lone Little Ringed Plover. Not to forget probing Snipe and roosting Lapwings. A Whimbrel remained faithful to the riverside at one stage giving an excellent flyby comparison alongside a Curlew.
Back up north at Old Moor RSPB, Barnsley, South Yorkshire the legendary Wath Ings held several waders towards the month's end, namely 10 Black-tailed Godwits, 3 Ruff and 3 Golden Plovers amongst a small gathering of Lapwings. There were 2 each of Ringed Plover, Greenshank and Dunlin and not to forget its signature Green Sandpipers. 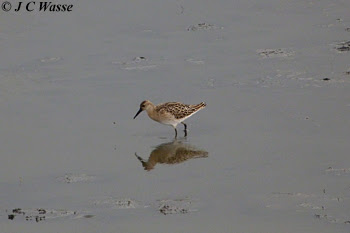 Of drift migrants - nothing rare crossed my path, but inland the sound of the 'hoeet' of the 'Willow/Chiff' became a common sound were perhaps local breeders and not continental visitors.
Of seabirds - so what does the following bring to mind in August? 2 layers of trousers, a fleece and wax jacket, spare fleece with extra waterproofs and hat and gloves on standby...
Typical dress code for an August Bank Holiday seawatch at Flamborough Head, East Yorkshire! Whilst the wind had a favourable NW component throughout most of Saturday 25th, perhaps a few days of this wind was required for a big movement of seabirds. Nevertheless from 1000 to 1900 perched on the grassy side below the foghorn station a nice and varied seawatch was recorded. Full details available at the Flamborough - Trektellen site, but my own counts included over 50 Manx and 6 Sooty Shearwaters, with double figures of Arctic Skua and half a dozen Great Skuas. An adult Pomarine Skua close inshore flying north late afternoon was nice to see. A couple of summer plumage Red-throated Divers flew by and waders moving 'in off' included a lone Greenshank as well as a small group of Knot and some Golden Plovers. A Snipe flying over the sea looked a little out of place, with Oystercatchers, Redshanks and Turnstones more familiar with the rocky coastline.
Of any other business - the Godwits played second fiddle to the crowds on the 11th, but offered a beautiful backdrop as they glowed in the warm sunshine on flying past a group of over 200 folk gathered near to the Marshland Discovery Zone at Rainham Marshes RSPB. The gathering were listening to passionate, well delivered, and in one example, an impromptu speech all with one simple message, at this one of the many Hen Harrier Day 2018 events. I'll let the photos do the talking. 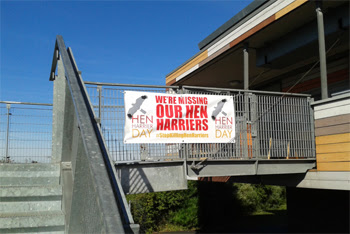 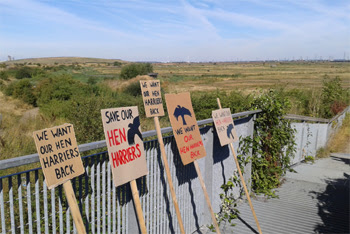 Scarcities or rarities. Yellow-legged Gulls may be scattered in some parts of the UK but along the Thames in July and August they are a dead cert, usually in double digit numbers. Some cracking views on the ebbing tide at Rainham Marshes RSPB. 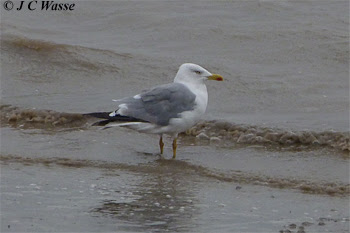 Cattle Egret, always nice to see and several can be seen in the UK throughout the year, memories of twitching one during the 1992 influx are distant. A Cattle Egret in the SW may not raise a few eyebrows (where there are over 50 present), but it is still rare in Yorkshire. The lure of one at Fairburn Ings RSPB near Leeds was tempting at August Bank Holiday. When it finally moved away from its perch at the base of a favoured bush, it shared a pool with Little Egret and an adult and an immature Spoonbill. A sign of the birding times, and the same could be said of the two juvenile Red Kites tangling with Common Buzzards over nearby farmland. 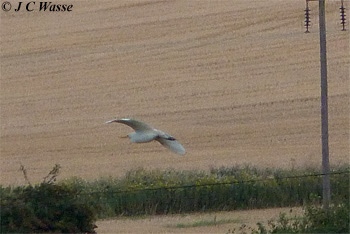 Old Moor RSPB has had a cracking year for breeding Bitterns, one bird was seen in flight along the edge of Wath Ings on the Sunday (washout) day of the Bank Holiday weekend.
The South Yorkshire moorlands played host to a passage Marsh Harrier on Bank Holiday Monday, where Ravens argued with Common Buzzards. Away from the moorland ridge 5 Yellow Wagtails dropped in to inspect the insects around grazing cattle in upland pasture. A pair of Crossbills flitting between moorland plantations were nice, hopefully more to come when the birding autumn turns to winter.
Posted by J C Wasse at 7:43 pm

Get on this 'Buzzard', it's barred!

Back home for the weekend and first birding stop was at the couple of weirs along the river Don east of Sheffield city centre (Sat 04 Aug 2018). A scattering of Lesser Black-backed and Black-headed Gulls with a lone Common Gull. An adult Lesser Black-backed Gull originating from Stavanger, Norway with black colour ring J793H showed briefly. It was ringed in 2015 its first calendar year - with thanks to Andy D for the information. Assuming intermedius. Several sightings of Kingfisher point to a healthy urban river and a Sand Martin showed well hawking insects. 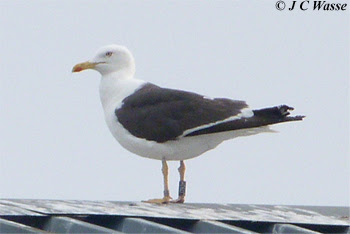 Over the weekend the moorland edge provided good and varied birding as did the approach just outside of the Peak District where a Little Owl watched horse riders go by from its stone wall lookout, pausing before it hunted the edge of a newly cut field. Several Curlews remained in the uplands as the breeding season draws to a close, yet Ravens were reinforcing pair bonding as two put on a bit of a tumble over a moorland valley. 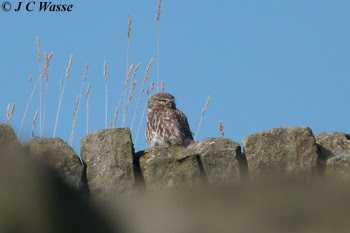 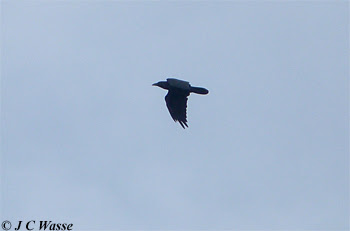 Hide your sausage rolls from this troublemaker, the one on the left, it even ran around the building to make a 3rd attempt on the food bag! 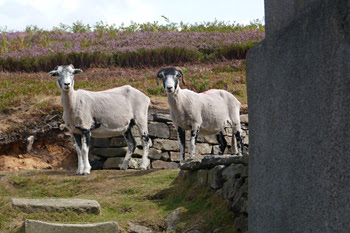 As dusk fell Venus and Jupiter began to shine bright in the western sky to the backdrop of a couple of churring Nightjars. Just after 10pm as Jupiter fell, Saturn and a bright red Mars showed well in the western sky.
Birding the South Yorkshire moorland edge is always magical and this weekend proved no exception. Whilst it was very early on in the autumn migration season this stretch is always worth a look. Arrived at Low Moor, Midhope at about 10 am (Sun 05 Aug 2018) and it was starting to get warm as high pressure remained dominant, although a light SW wind did help temper the heat. The fair weather marker clouds were beginning to melt into the blue background. Looking back towards Upper Midhope where the previous afternoon a Hobby had startled the hirundines, with thanks to the alarm calling Swallows who got us on to the scythe shaped predator, I was scanning this area for a repeat performance. Not to be, but a Common Buzzard drifted over fairly low down and another came into view but at a greater height. It launched into a power glide and soon they both headed towards Midhope Reservoir which they circled. Were they local or birds on the move using the light headwind to inform their route? A 360 degrees scan during the first hour also revealed several Buzzards to the south west along the moorland ridge and plentiful Kestrels hovered over both the moorland and grassy fields. A couple of the young Kestrels squabbled by the track much to the annoyance of a pair of Jays.
Just after 11 am my dad spotted a couple more Common Buzzards drifting in from the direction of Langsett Reservoir, along the same line as the ones mentioned above. Checking the status of wing moult is a good pointer to help identify if the same birds are being seen again and again, will help in ageing the birds, but sadly missing feathers may be for another not so good reason. A third 'Buzzard' appeared, a new bird because it was clearly missing a few feathers (at the join of the primaries and secondaries) in the same place on each wing. I scoped it and alarm bells started to ring, I'm glad to say not because of the state of the bird, because of what species it was. It had barring / thick spots on the underparts against a pale body with barring extending into the front of the underwing. Head appeared grey-ish, not totally hooded as it had a white throat. We watched it pass overhead and I took a few record photos as it glided towards Ewden Heights. Throughout the observation it never flapped and maintained at least flat wings, no dihedral discernible. We were confident that it was a Honey Buzzard, but could we track it down the Langsett - Strines valley? Off to Ewden Heights.
Within a few minutes we were set up half way down the valley just below the Heights waiting in hope for it to appear from the Heights, and luckily enough a couple of minutes later it did. Camera and scope at the ready, and after having nice scope views of the flight profile, its slender long tail and at the other end its grey protruding head, not to forget striking barred underparts and with more record shots taken, it made a beeline for Broomhead Reservoir. Likewise we made a run for it to Agden Side trying to alert as many birders as possible in situ and along the road. We were soon at Agden Side and with other birders present we concentrated on White Lee plantation hoping it would choose this route as its way south. A bit of a gamble but sure enough just after 1130 it appeared from the direction of Broomhead Reservoir and all present had nice views as it slowly crossed over the Rocher and was last seen heading towards Sheffield city centre. It didn't flap once! 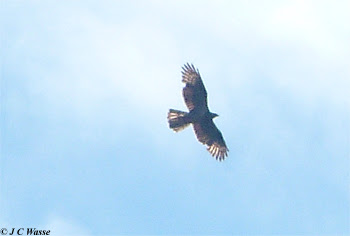 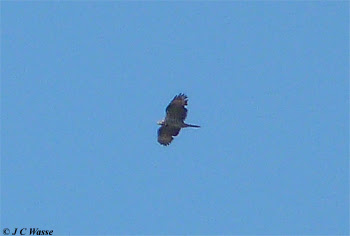 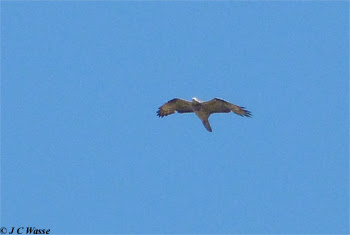 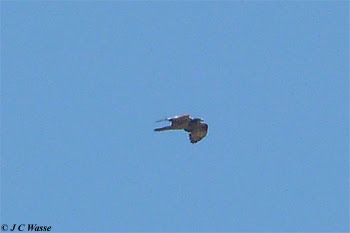 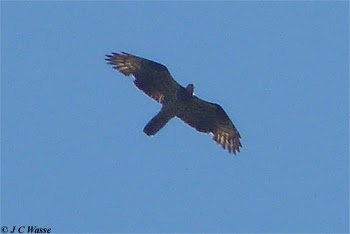 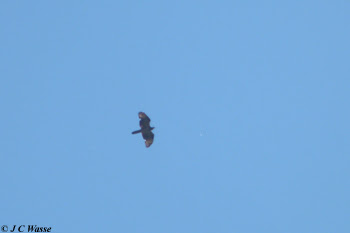 Assessing the photos showed it to be a moulting Honey Buzzard, and at the moment I reckon it was a male. It was a very nice surprise, a brilliant Barnsley tick (#231) and a new one for my moorland raptor list. Come on Pallid Harrier, you're next on the wish list for the patch, but stay safe when in the area!
Posted by J C Wasse at 6:53 pm