Early Autumn Yorkshire Birding plus a trip to Wantage

I cannot grumble with Osprey sightings this year, found one moving north in spring and twitched birds stopping off at Welbeck, Nottinghamshire on their return south. The chance to see one when last back home at the end of September, and only a short drive away at Ecclesfield Ponds on the edge of Sheffield, was too good to miss. It didn't disappoint! 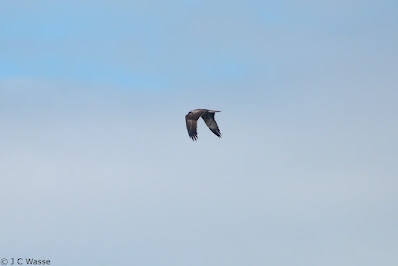 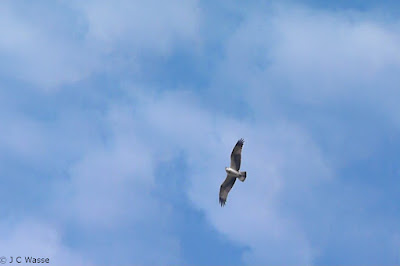 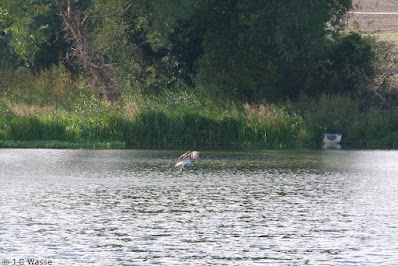 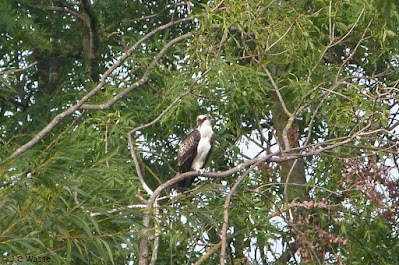 The end of September brings acceleration to the changing of the birding seasons, back home this can be seen on the moorland edge as skeins of Pink-footed Geese encouraged by a NW wind pass high over a feeding flock of House Martins and Swallows, to the backdrop of a singing Chiffchaff on a relatively mild morning. 2022 was no exception, with 9 skeins totalling close to 1000 'wink wink' Geese noted passing east over South Yorkshire moorland over several days late in the month. Not the first of the autumn, indeed a similar number of skeins and 'Pink-feet' moved through on this Lancashire to Norfolk trajectory on one single day mid-month. 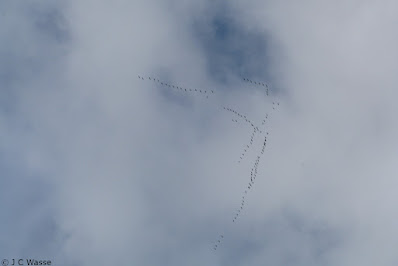 The moorland still produced its magic and other birds moving included a few Meadow Pipits, Skylarks, Chaffinches and the first 'seeping' Redwings. Siskin numbers building up in trees cloaking a moorland reservoir, from where my first Crossbill at this site in well over a year, perhaps closer to two years, flew over announcing its presence. Hopefully, the start of a come back. 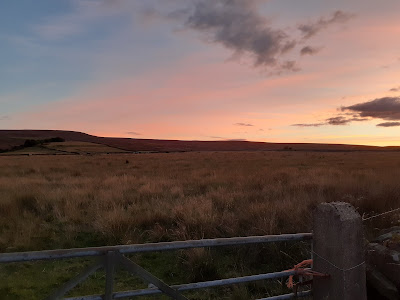 Birding the moorlands was interrupted on Monday 26 September 2022 with the fantastic discovery of a Nighthawk roosting on a garden fence at Wantage, Oxfordshire. The journey was ok, no delays and the skies full of Red Kites indicated I was not too far away heading towards Oxford. I joined the small crowd of patient and well behaved birders studying a garden fence, wing mirrors and makes of car being used as signposts, not really needed, it was there just roosting on a fence. I didn't see it do much, it gave several shuffles, but allowed for nice views of its cryptic plumage.  Never thought I'd get chance of seeing this visitor from across the pond on these shores. 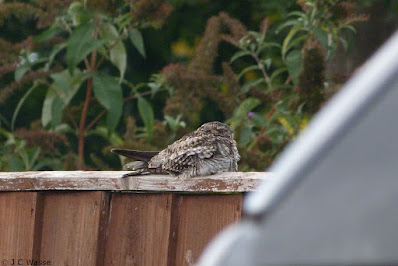 During the week the good weather held and the wind was mainly from a north-west direction but the Thursday saw a change to a north-east. A few new migrant birds came in with a few lingering scarcities that showed fairly well. A quick look early afternoon at the trees behind the tables at the Crown and Anchor car park and one bird flew in, it was a silent Yellow-browed Warbler, which showed nicely for a few minutes and then melted into the background. Up at the Listening Dish hedge patience needed for the Barred Warbler before it fed on top of its favourite bramble bush. Of brambles a couple of 'dweezy' Bramblings flew over nearby with arriving Redwings. A Wryneck showed well on the rocks as did a Wheatear near the Kilnsea Triangle. Many thanks for access to the Wryneck site. Patrolling Kilnsea Sparrowhawks brought back memories of watching 'Sharpies' do likewise over in Cape May, NJ, USA. 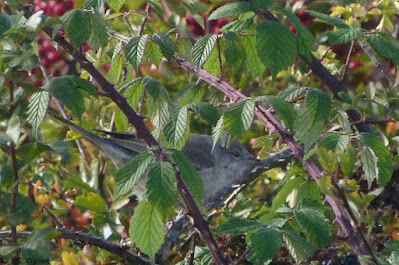 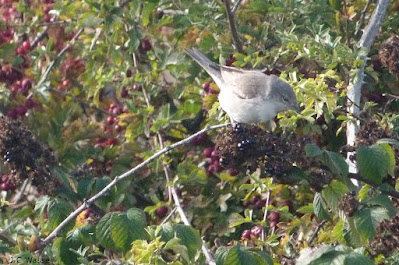 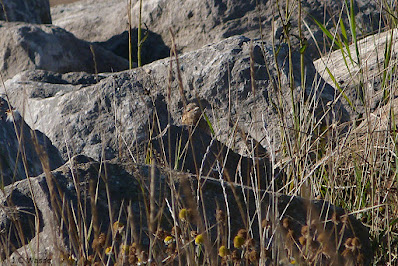 In time for seconds

Sadly, over the last few years, not been back to my old patch The Wath Area many times on returning home. Time to make up. A wet Friday, a good chance to visit Old Moor RSPB and Wath Ings was looking good. Perhaps not the greatest numbers of waders but such diverse birding, today's visitors reaping the rewards of the effort gone in to developing this wonderful site right from the start many decades ago, standing on the shoulders of giants when birding this site.

A 2nd calendar year Yellow-legged Gull looked all alone on Wath Ings as Ruff wandered by, whereas a more confident Water Rail dared to venture into the open across the main marsh 'slaloming' past Moorhens. A few scope's widths to the left saw an early returning bobbing Jack Snipe give a brief view before wandering back into cover as the rain took hold. Moved on to the Wader Scrape as news came through of an Osprey in the valley, and there it soon was hanging over the Willow Pool before disappearing over the top of the Wath Ings hide. A couple of hours later it moved back low to the west hardly spooking anything on site. This being my second Osprey for The Wath Area, will never forget the first as it visited and fished Broomhill Flash for about 15 minutes one sunny August afternoon in 1991, quite literally a takeaway. I remember watching it until it was a dot in the scope as it carried the fish up into the sky on its migration south.

A Great White Egret flew down the river and a couple of cream crown Marsh Harriers were seen moving between the reedbeds and nearby Bolton Ings. With the front moving through from the west in late September something scarce or rare must be on the cards for the area, and next day as September moved over to October a cracking Pectoral Sandpiper was found on Wath Ings. My second visit in as many days. You may classify 'Pecs' as either a scarce or just a minor rare visitor to these shores from both Siberia and North America but they are belters. Golden spangled with its distinctive breast band and the classic attenuated closed wings cloaking gleaming white underparts, both features that to me characterise a scarce wader to these shores. 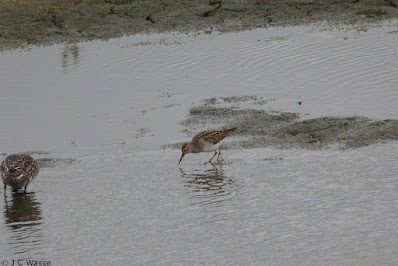 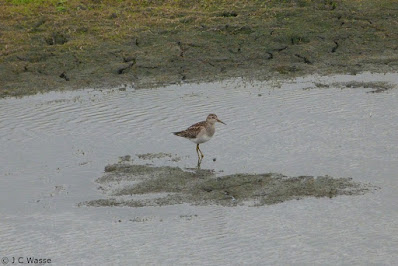 Having been lucky to see  a few 'Pec Sands' in The Wath Area over the years, I must admit I was more interested in the Rock Pipit present. Only my second for the area of this annual or near annual autumn passage migrant, very nice views compared to one over Wath Ings way back one October morning in the late 80s or early 90s.

Ventured a few miles north up to Edderthorpe Flash on Saturday 01 October 2022, a site that is also looking good with water levels attracting passage waders. A few Golden Plovers were amongst tbe Lapwings with several Ruff and Dunlin dotted about as viewed looking across from the bench. I checked the Gulls, about 100 large ones, Lesser Black-backed and Herring, and on the right hand side an immature (1st winter) stood out even with its back to me as it faced into the light wind. What got my attention were the dark tertiary block on the closed wing, smallish white head with hardly any streaking to which a needle like black bill adjoined. Let's get the other features.

Alerted another birder on site that it looked potentially Caspian Gull, time for a detailed look. Saw the Caspian Gull standing, swimming and flying off, nailed it with the underwing.

Standing in the water

With apologies for not the greatest of sketches and notes below as based upon the sighting. 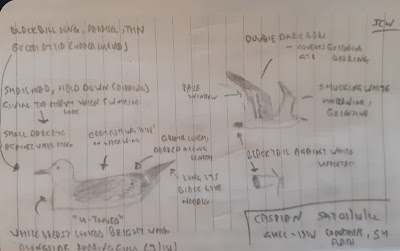 The Caspian Gull flew north not to return in the following 30 minutes but a further scan of the gulls produced a scowling adult Yellow-legged Gull trying to hide alongside adult Lesser Black-backed Gulls.