Changed from winter to summer plumage in the space of a week in late May, the wax jacket moulted to reveal the Cape May fleece with worn primaries and damage to the carpals. Although, gloves and winter hat remained on standby. The birding was typical of late Spring, summer birds well and truly 'in' and still a chance of seeing a few rarities to these shores. This week didn't disappoint.
It was nice to catch up with birders in the field, some of which I've not seen for many, many months.

Several visits to the South Yorkshire moorlands where an immature Red Kite wandered over to the annoyance of Lapwings and Curlews on a couple of occasions, Merlin chased at breakneck speed on one visit and the swoosh of an adult male Peregrine stooping after a Woodpigeon reverberated across the valley, the action was all of a blur. Ravens thin on the ground the "cronk-cronk" call giving occasional reminders of their presence, the silence replaced by the haunting call of a Golden Plover circling its summer home. On terra firma Ring Ouzels were active, a male in song and Stonechats gave song flights and exaggerated "chacking" from the same valley side. Willow Warbler song dominated a valley beck. Nearby, a flock of 25 Crossbills remained about a tree cloaked reservoir but were not very showy. Across from such a reservoir Snipe drummed in showery weather though were shy when the sun showed itself.
When news broke of a Thrush Nightingale in East Yorkshire at Flamborough Head on Monday 24 May I was off. A Yorkshire tick, having seen two before in GB, one in song at Dungeness, Kent in early June 1994 and the one walking about out in the open at Landguard Point, Suffolk in late August 1995. I remember briefly from the Kent sighting, and more extensively from a visit to Sweden, the beautiful song without the rough notes of Common Nightingale. Arrived at the site and in position at 10:30. Looking up at the Bay Brambles/Willows the bird gave a brief burst of song and then perhaps around 11am it moved into view, and could be seen through the near branches where it sang for a while longer before returning to cover.

Heading back via Wykeham Forest where Common Buzzards were on show and a couple of Ospreys flew at distance down the valley in fairly quick succession before and after 13:30. A couple of Goshawk sightings, always nice to see especially outside of the display season. A lone male Crossbill in song from the viewpoint where a Garden Warbler sang from cover. At the car park a Tree Pipit could be heard.

A distraction on the way back was the Franklin's Gull at Swillington Ings (RSPB) that had been seen again at the Black-headed Gull colony after a couple of days absence. Arrived late afternoon as the thunderstorms abated walking up from the southern end. At the turn off to the reedbeds tripod laden birders marching forcefully into view signalled it had flown towards the reedbeds. Squelching along for several hundred yards to overlook a pool from where it could be seen and heard bellowing to the half or dozen or so Black-headed Gulls present alongside on the muddy edge. It looked very smart in the neutral light even showing a distinct pink flush to the underparts that was not discernible in my photos. A fantastic supporting cast that included Black-necked Grebe and "booming" Bittern. The site looked well different to when looking for the wintering Ferruginous Duck in the Pochard flock in the early 90s. 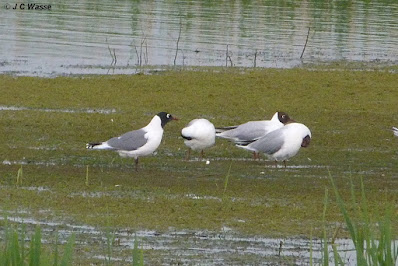 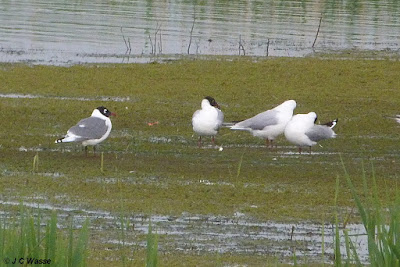 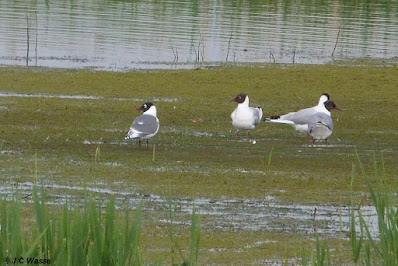 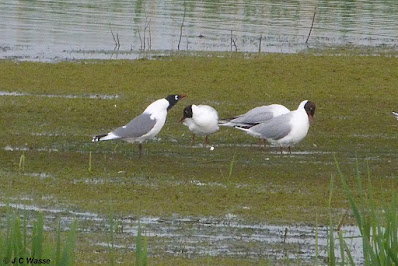 Two visits to Welbeck Watchpoint to the south of Worksop in Nottinghamshire looking for Honey Buzzards, and they were hard work. On Tuesday 25 May after shivering in a wax jacket most of the morning as the unexpected rain came down, the sun eventually showed well from after 3pm after which time there were four sightings up until just after 17:30. On one occasion two were in the air together. The penultimate sighting was of the pale bird of the two whose grey head glowed in the sun as it circled over the nearby woodland. Despite a sunnier and warmer morning on Thursday a pale male showed only mid afternoon and a darker headed bird, flew close by about one hour later. Both birds shown below and thought to be the same two as seen on Tuesday. Red Kites present throughout along with the obligatory Common Buzzards. A Hobby on the first visit seemed to show an interest in the Swifts present that hunted over the lake. 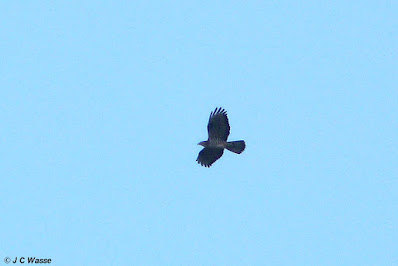 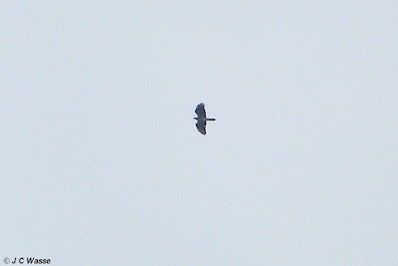 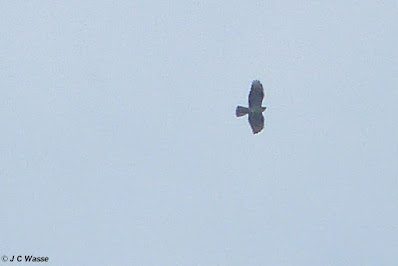 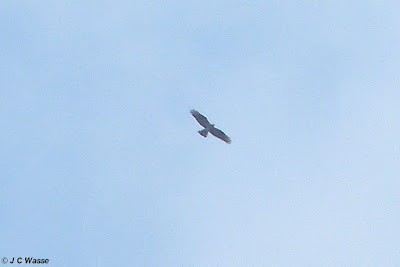 Spurn hosted an Eastern Subalpine Warbler which I twitched on Friday 28 May, the nearby male Red-backed Shrike surprisingly more elusive. A walk down the Point where from beyond the VTS Tower there three Spotted Flycatchers showed as did a female Whinchat and two Wheatears. The passage Common Rosefinch showed briefly near the Point from where a Cetti's Warbler sang in the most unlikely of places. 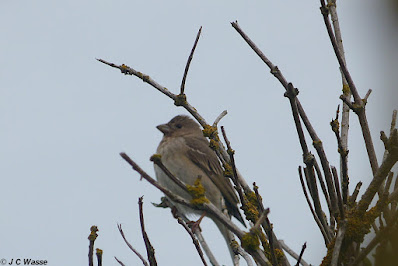 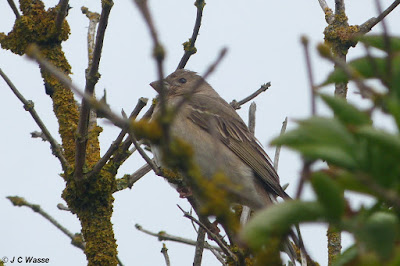 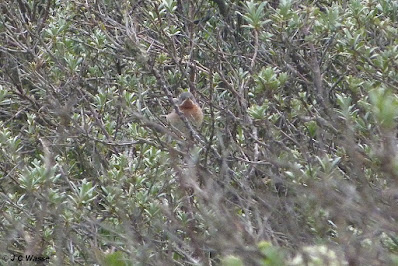 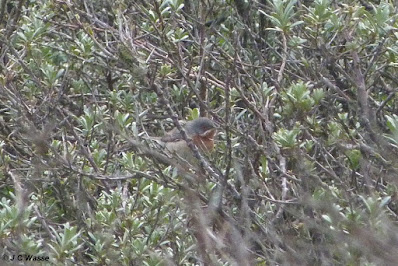 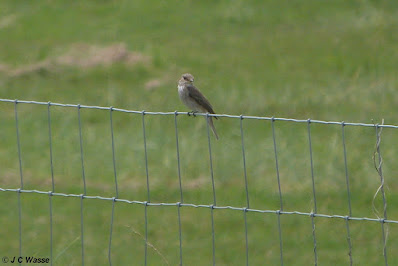