A visit to Bempton Cliffs RSPB didn't disappoint. The Black-browed Albatross not present late one morning but nice to bump into Alan Whitehead whom I had met whilst birding Anarita Park, Cyprus several years ago, and who kindly let me know of a Cream-coloured Courser at Mandria later that visit in 2018 (footage just over 7 minutes into the compilation). In the absence of the wanderer from the southern oceans the cliffs were alive with sounds and sights characteristic of a seabird city, not forgetting the distinctive odour. Also, not to forget the healthy population of Tree Sparrows around the visitor centre and a Corn Bunting singing from the fields. A mid day wander to relatively nearby Wykeham Forest where the skies were raptor free until the striking pale male Honey Buzzard circled the forest edge and drifted off at about 2pm. News broke of the Albatross's return an hour or so later and before 5pm nice views of it at Staple Newk cliffs, Bempton. It moved down onto the sea, and over a period of 15 minutes drifted north and then took flight, flying north close to the cliff edge, nice to study its flight. 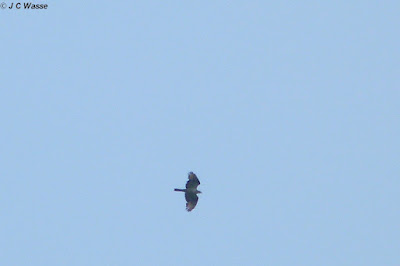 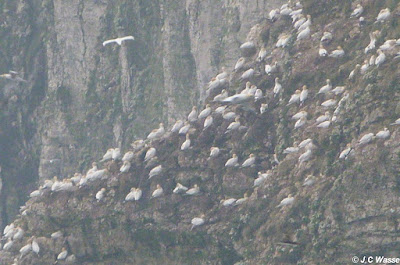 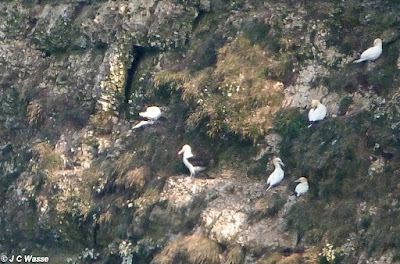 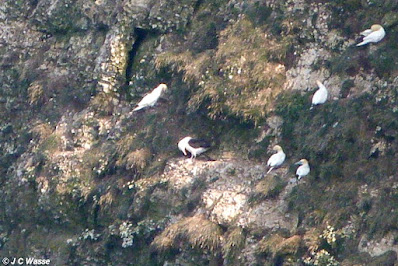 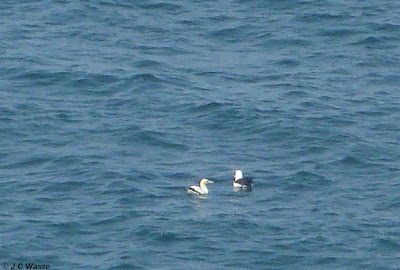 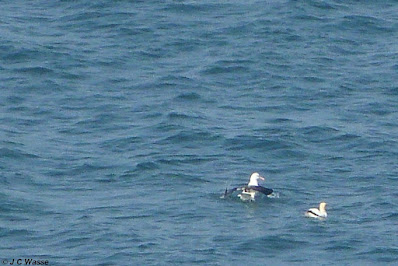 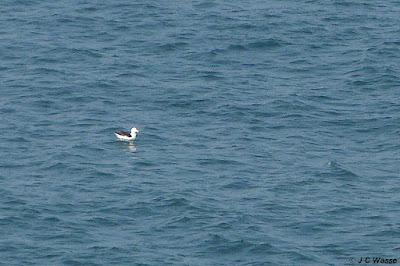 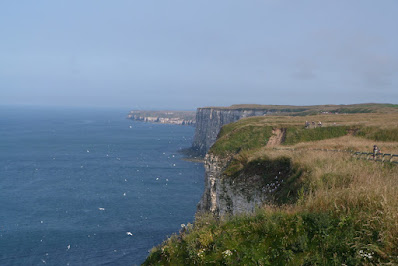 Another twitch, this time to Cemlyn Bay, Anglesey, North Wales where the Elegant Tern put on a fine show at the lagoon. The shape of the crest varied with posture and a bill that would strike fear into many a fish. In flight the visitor from the Pacific coast of the Americas looked a heavier bird than its Sandwich Terns friends, its call was Sandwich Tern like, perhaps identical, but the cacophony of the Tern colony made it impossible to study further. Arctic Terns rested on the shingle beach and Common Terns were also present. The stillness of the bay was only broken by the whirring flight of a pair of pristine breeding plumage Black Guillemots. A slight detour on the return to have a look at half a dozen Choughs at South Stack RSPB, where a Hooded Crow played hide and seek near the cliffs. 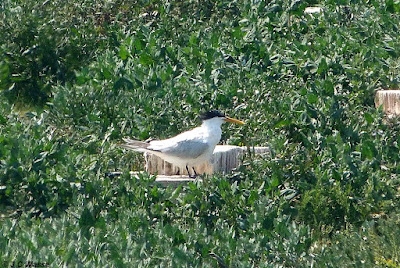 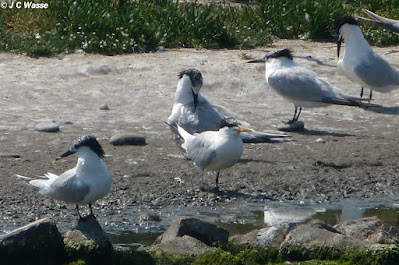 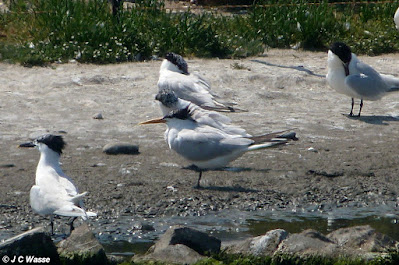 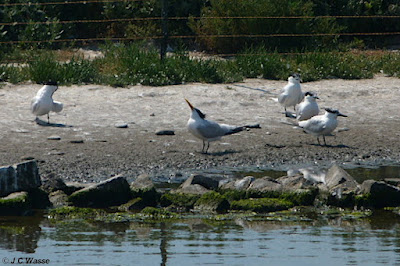 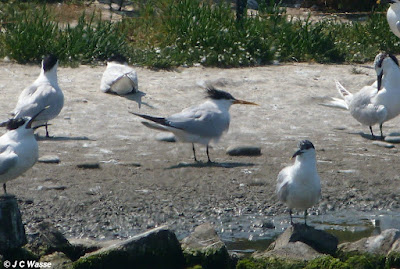 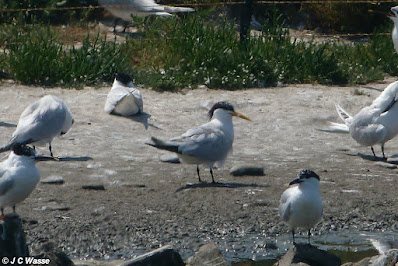 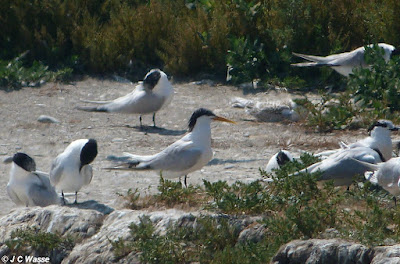 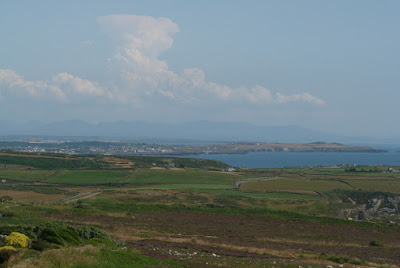 Midweek and a visit to Welbeck Watchpoint, near Worksop, Nottinghamshire gave a lucky sighting of two Honey Buzzards at about 1.30pm over woods to the east, they circled and drifted south east, towards Budby? A chance to drive nearby to Budby Pumping Station, with thanks to the birder on site at Welbeck who showed me the way, the 2 HBs were then over distant woods west of the pond at about 2pm, and you've guessed it, they were drifting back towards Welbeck. On returning they didn't show. Both views were distant, best looks at one of them was of a pale bird with one showing tail feather moult. Also seen, a magnificent overhead Raven and a brief view of an equally impressive Spotted Flycatcher in trees by the Watchpoint. Return via the Pectoral Sandpiper at Adwick Washland my first visit to this relatively new addition to the birding scene in the Dearne Valley, South Yorkshire, looks a site with much potential. 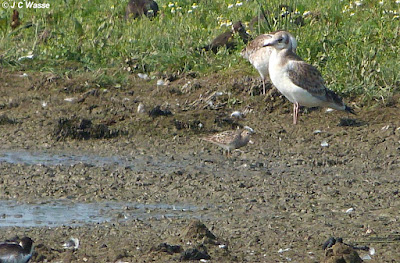 Elsewhere in England the air filled with late evening song, squeaky gates needed oiling, and the horizon broken by the sight of a flame-tinged ghost flying low over the upland. A Tawny Owl hunted from roadside posts, nice to see it in relaxed pose away from the hunched roosting posture typical of this species. Goatsuckers had quietened down, but a Little Owl peered from a stone wall giving its aggrieved stare.
The Pacific Golden Plover at GB's wader headquarters, Frampton Marsh RSPB, Lincolnshire, showed nicely on the grassland and the wader spectacle on the pools enhanced when a Peregrine forced the shorebirds to take flight, though the masses of Spoonbills (26) were not all that impressed.
A moorland edge held the falcons, where a wandering Peregrine drew the ire of a Hobby, namely a brave bash to the head, and then Kestrels escorted it off site. With thanks to Swallows drawing our attention to a male Merlin, with another group alerting of the presence of a Sparrowhawk. Buzzards patrolled the skies, keeping an eye on a wandering Red Kite. 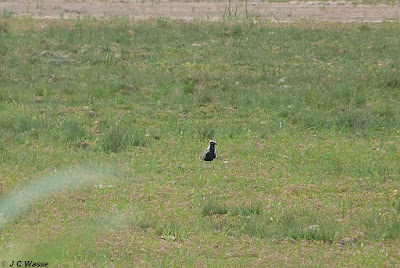 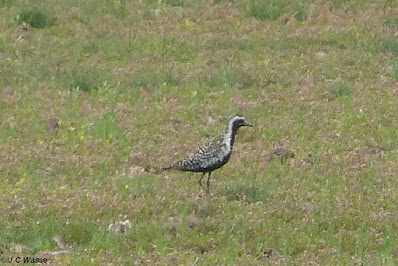 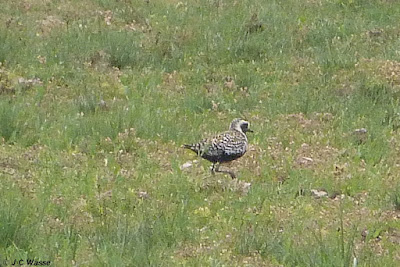 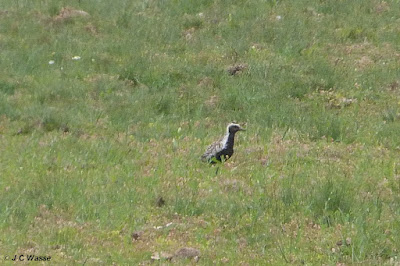 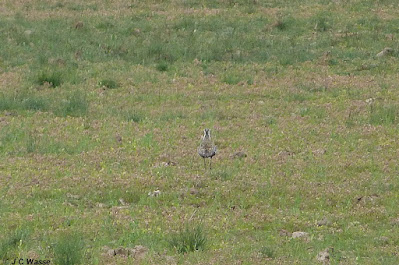 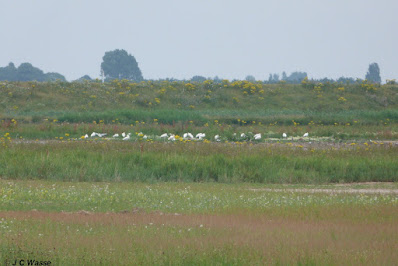