A bit of twitching in unseasonably cold weather. On Saturday 4th May saw the half a dozen White-winged Black Terns picking at the surf of Abberton Res., Essex in a strong northerly. An hour or so later and in more sheltered south east Suffolk, the adult male Red-footed Falcon hunted from the landing lights of the old airfield at Rendlesham Forest. A Woodlark was atop a neighbouring light. Also my first Hobby of the year gave even better looks as it flew overhead ahead of a rain shower. Driving west through the Suffolk countryside mid pm towards Cambridgeshire to twitch the drake Baikal Teal at March Farmers the outside thermometer went as low as 4.5C, a little bit parky for the time of year. The drake showed at distance as viewed in a biting wind from the flood bank. It was good to bump into Nick O, a birding pal from back at Uni. 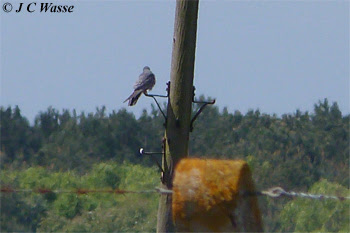 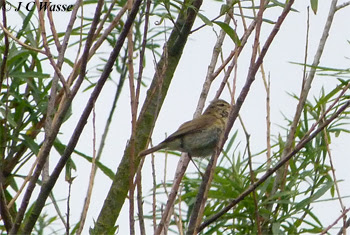 
6 nights in Extremadura in mid May

Stunning scenery, hot weather and top birding, but where were the Montagu's Harriers? Many highlights, with the Trujillo Lesser Kestrels putting on a great show. One sighting of Honey Buzzard and nice views of Spanish Imperial Eagles plus other raptors. Good birding variety, not just raptors stealing the show.

More on this trip can be found by clicking here. 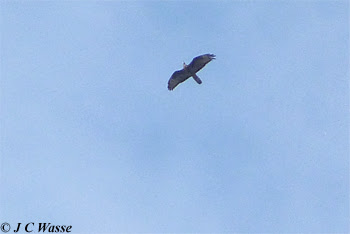 Always nice to get a tick on your lists. In calm sunny conditions twitched the Great Reed Warbler at Wintersett Res. with my dad early on the Saturday (25th May). The giant Acro. had now settled down into what would eventually be a few weeks stay, and was readily belting out the croaky song as we walked down the track from the Anglers Country Park car park. It showed reasonably well at the far edge of the reedbed. Yorkshire Area tick 338 (+ Fea's Petrel type and Isy Shrike type) and Barnsley Area tick 233. 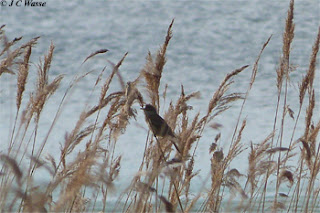 Over this weekend along the South Yorkshire moorland edge we saw several raptors including passage Marsh Harrier and many Curlews were in the fields. Are the Redstarts  disappearing from the NE corner of the Peak District just like the Wood Warblers? On a happier note at 2pm on Spring Bank Holiday Monday (27th May) a raptor maintaing a shallow M-shaped wing profile started to circle Midhope Res., South Yorkshire. This profile ruled out the local Buzzards and grabbed my attention, scoped it and finally a passage Osprey. Got my dad and Stu G onto the bird and it then drifted off towards Ewden Heights.


A weekend in Germany

A long weekend visiting friends near Karlsruhe at the end of May / early June. Varied birding focussed in the Rhine Rift Valley with a trip to the Black Forest. The wetlands at Waghäusel were as rewarding as always with Purple Herons showing well at their nest 'towers' and Bluethroats giving their 2nd song of the season from their reedbed territories. Red-backed Shrikes present as well. 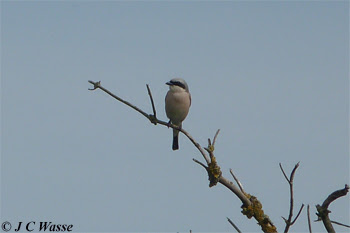 A couple of visits to Rainham Marshes RSPB, London in mid June, quiet summer birding as to be expected and the focus soon turned to dragonflies and butterflies. However, literally the first bird I saw on the Thames was a highlight, a 1st summer Mediterranean Gull feeding alongside Black-headed Gulls just off the river wall. Non bird highlights included sightings of Broad-bodied and Four-spot Chaser dragonflies and many butterfly species with notables being Green Hairstreak, Marbled White and Small Heath. 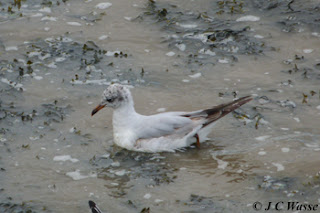 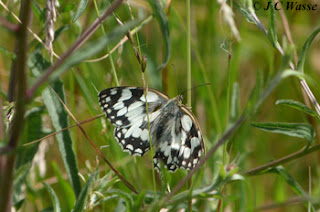 Back to the birds and there were, and perhaps surprisingly for the time of year, 1000+ large gulls about the landfill, most being Herring Gulls. On one visit in June they were spending their time either commuting between the southern slope of the landfill and the Thames to bathe. I could not pick out any Yellow-legged Gulls but a visit on the opposite side of the river to Erith Pier in early July produced this striking dark-eyed Herring Gull. 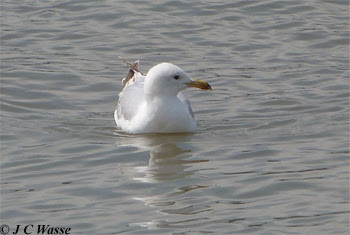 Is it an Egret or Heron, Great White or simply Great?

However you may know the big white egret, be it as Great White Egret or simply Great Egret, and to confuse matters it is currently labelled scientifically as member of the Ardea (Heron) genus, it still has a wow factor where or whenever I see this species. I've been lucky to see them in the main over in NJ, USA and in western Europe, and connected with about 20 in GB to date, since twitching one in Leicestershire in July 1992.
I was lucky to find the one shown below whilst scanning the inner wetland from the Shooting Butts Hide at Rainham Marshes RSPB, London on a Sunday afternoon in late July. It seemed to fly in from nowhere. Two of these giants had been seen together at this site few days earlier, unsure if this was one of those birds, a new visitor, or perhaps a local bird that had been gin the area, on and very much off, over the last few years. The Little Egrets didn't appear to mind the company of the Great White Egret but a Grey Heron took a serious dislike to its Ardea relative. 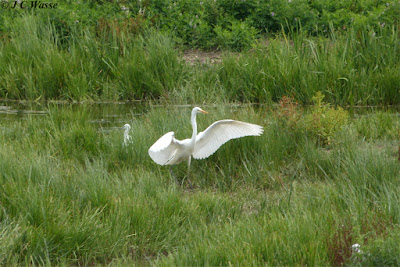 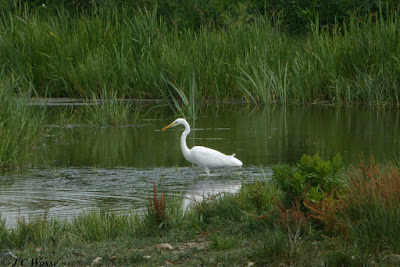 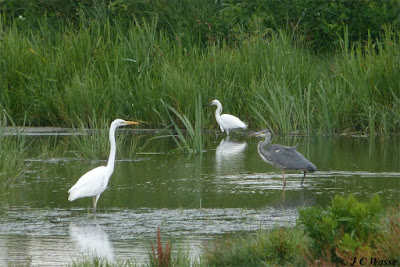