Annual trip to see friends in Germany, a long weekend birding in the Rhine rift valley north of Karlsruhe plus an afternoon in the north west corner of the Black Forest. Good weather throughout during this visit at the end of May/early June 2019.
Waghäusel

Maybe not as world famous as say Cape May, NJ, USA, Cley and Rainham Marshes, Wath Ings and the South Yorkshire moorlands in the UK and not to forget Paphos Headland in Cyprus, Waghäusel is one of the top birding spots in Germany. Its essentially wetland habitat with hedgerows and small areas of farmland encompassed in a rectangular shaped reserve is well known within Germany for attracting rarities on passage as well as providing a summer home for many sought after species. These include nesting Purple Herons, a lure for birders and photographers alike, many Bluethroats, Red-backed Shrikes, mimicking Marsh Warblers and buzzing Savi's Warblers amongst others, attracting both local and international visitors. 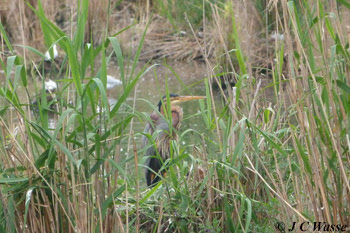 A couple of visits this year didn't disappoint. All of the species mentioned above were seen with the exception of the latter, heard only. Turtle Doves purred away, hopefully not into extinction and several Red-backed Shrikes were on site. The ponds held a healthy population of Red-crested Pochards, the Black-headed Gulls were as noisy as ever at their nesting colony, drawing the attention of a Yellow-legged Gull in search of a snack, but their symbiotic nesting pals Black-necked Grebes were not that showy this time around. The many many singing Nightingales, perhaps taken too much for granted, meant the air was never silent, but when the birding was quiet on the ground skydancing Marsh Harriers, a hunting Hobby and the occasional circling Black and Red Kite maintained interest. Not to forget up to 20 White Storks present in the area at any one time. It was also nice to see a singing Great Reed Warbler in the NW corner, not caught up with this species here in many a year. In 2 visits we totalled about 70 species plus a single Crested Lark at the nearby McDonald's. 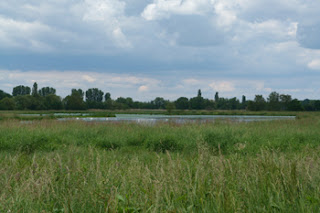 A new site to check out near the city of Bruchsal, and this beautiful meadowland stretching north with its sheltered wetland was productive. A couple of resting Ruddy Shelducks were presumably 'Category C' tickable and they shared the pool with a few other ducks and a White Stork. At least 2 Great Reed Warblers singing from reedbed islands and on show defending their patch. Marsh and Reed Warblers were heard but not seen and a look upwards would reveal both Kestrels and Hobby hunted emerging insects over the unspolit meadows. Insects on the ground and along the reed lined channels were of interest to us, and we saw a stunning Queen of Spain Fritillary butterfly and several damselfy species including Southern and White-legged Damselflies and many Banded Demoiselles. 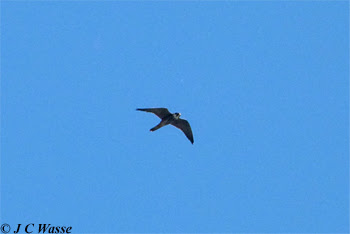 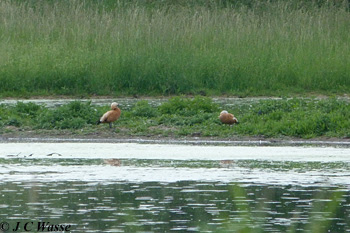 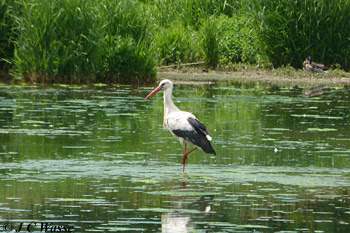 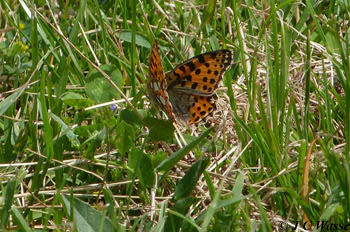 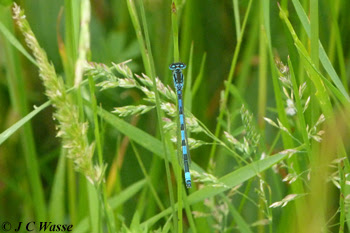 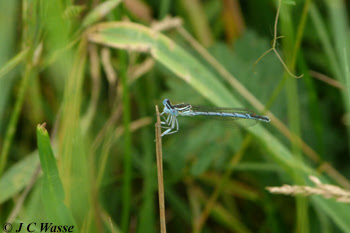 Rising up along the eastern edge of the rift valley and essentially to the south of Baden-Baden the Black Forest and its scenic drive along the Black Forest High Road (Schwarzwaldhochstrasse) draws many a visitor to this forested upland, in a way akin to the attraction of the Peak District on a weekend. Two sites were watched, firstly we made a circular loop of a couple of kms or so around the Hotel Schliffkopf, which in year's past have produced sightings for us of Ring Ouzel, Crossbill, Nutcracker and Citril Finch. The latter has disappeared from the area for a few years now and this visit late in the Spring season yielded singing Meadow Pipits and Willow Warblers with a glimpse of a dapper continental Coal Tit. A Camberwell Beauty butterfly sadly didn't linger but more showy were groups of Swifts feeding along the north-south ridge. 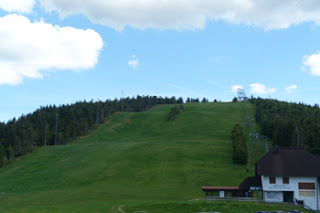 Off to Siebelseckle a few kms back up the 'High Road', namely the cafe at the bottom of the ski slope where Black Forest Gateau showed very well. With our scopes set up we scanned the slope to the south and the valley leading east, drawing in interest from visiting walkers, bikers and park rangers alike. Although unsure of how "Owt doing?" translates into German, I did my best to explain in reply to a forest ranger that were look for raptors and in return I got the impression that Golden Eagle was seen here last week. I left the talking to Chris and Sue. I could about understand that Ring Ouzels were in the area, as were Honey Buzzard and I believe there was talk of Capercaillie sightings as well, although maybe not recent? Skyward, a few Common Buzzards were seen and singles of the 2 Kites. A noticeable local feeding movement of Common Swifts up from the towns and cities below was taking place with many pausing to hunt over the top of the ski slope. A study of which gave us sightings of several Alpine Swifts mixed in with its smaller relative, allowing a test of our skills in picking out this species at distance and at times in shadow and in a Swift melee. The slower pace of the Alpine Swift when gliding, and with what seemed to be more deliberate turns at distance when compared to the flight of Common Swifts could be seen. One of my favourite birding locations, will never forget the passage ringtail Pallid Harrier that we fluked here back in 2014.
Please click here for a detailed report with a summary of the birding over the years in this western area of Germany along and about the Rhine Rift Valley.
With thanks to Chris and Sue for kind hospitality, looking forward to returning. After many years of trying surely Waghausel's elusive Little Bittern will eventually give itself a fly around... next time?
Posted by J C Wasse at 12:12 pm