Spring Birding Pedigree - tweeting in the wing flaps of Cranes

Nice birding back home on the moorland edge over Easter. The song of Willow Warblers dominated the air, single Cuckoos called from several shallow valleys and bubbling Curlews meant these wonderful had not been lost from this upland habitat. Staging Ring Ouzels provided a fine sight and Buzzards were commonplace sharing the skies with hovering Kestrels.
One steady afternoon (Thursday 18 April) birding in the Midhope Reservoir area the tranquility was broken when a glance towards Upper Midhope saw 2 big birds gliding over heading towards the reservoir. Without bins they simply looked "rare", with bins they were Cranes and with scope they were quickly identified as Common Cranes, probably no other to be expected, but you never know. Wrestled the camera from its case and managed some record photos as they circled Midhope Reservoir, continued south before heading back to circle over Low Moor and then gaining height heading "south" towards Ewden Heights. Shame they didn't land at Low Moor. A quick tweet or two and a few texts to alert others in the area but sadly it looked like they moved straight on through. Were they the ones that dropped off briefly at Lound, Notts. later that afternoon?

With thanks for the likes and retweets on Twitter concerning the sighting, appreciated. 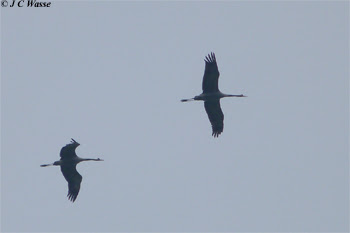 Most years Bramblings can be found along the moorland edge in varying numbers be it passing through in autumn only or staying to winter, attracted to available Beech mast. This 'winter' was fairly good for this finch, a Chaffinch relative that makes home in Scandinavia. Not ridiculously big numbers but in late March again at Midhope Reservoir a sizeable Finch flock held close on 100 Bramblings. They were quick moving and possibly migrants moving north along the moorland edge using the tree clad reservoirs as stepping stones. The flock would get up from the trees when a Sparrowhawk was on the prowl, allowing for a reasonable estimate to be made of the numbers and species involved. Anywhere between 200 and 500 birds mainly Redpolls, several Mealy types spotted, but also triple digit numbers of Siskins and as mentioned, Bramblings. Crossbills didn't want to be left out as they were present in double figures. Some of the Bramblings looked really smart especially in flight as many moved north during one afternoon. Nearby Ingbirchworth Reservoir held a dozen Bramblings by the feeders at around the same time, several singing males, a sound I've never heard before. This "swoosh" song a bit like a Greenfinch and perhaps with a hint of a Black Grouse! Several continued here to around Easter time, the one shown below may not be the greatest of photos of this species, but this individual enjoyed throwing its head back singing from the fence for a couple of minutes. 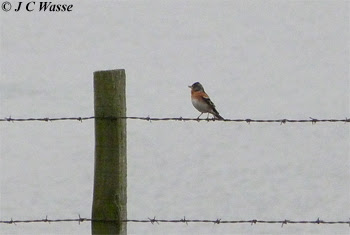