Back in 2002 I dipped the putative/possible/probable/definite Elegant Tern at Dawlish Warren, with my first sightings of this enigmatic species occurring on a Birdfinders tour of California (USA) some 10 years later. The finding of a colour ringed adult Elegant Tern on the British south coast this June was therefore very tempting from both listing and learning perspectives, especially given the news that this individual was identified as one of the summering birds found in European tern colonies over recent years. See the excellent Birdguides article, amazing records considering they are even rare on the Eastern Seaboard of the USA, e.g. there's only one accepted record to date in New Jersey. Keen to learn more on these 'carrot-bills', familiar with Caspian Terns in Europe and North America as well as a couple of UK sightings, many (American) Royal Terns from trips to Cape May and California, a couple of Lesser Crested Terns in the UK in the 1990s, as well as the Elegant Terns nearly 5 years ago now, in California.The weekend unfolded by 'playing it by ear', the bird seen briefly Friday afternoon. I did the usual Rainham RSPB birding on Saturday, and on this day the Elegant Term had now found its way to the Tern colony at Pagham Harbour RSPB, West Sussex, and seemed 'twitchable'. Checked out the travel options and a twitch by train, tube and bus was on the cards.Sunday morning - arrived early at London Victoria after 45min travelling north to south across London via train and tube to then catch a train to the south coast shortly after 0800. All going well so far but a third of the way in the train was unexpectedly terminated at Three Bridges. Bemused passengers left to wait on the platform for the next train nearly one hour later, along with another birder heading for the Elegant Tern who also had to leave the cancelled train. Despite the travelling hassles the countryside was pretty smart, crossing the picturesque South Downs and the view as Arundel Castle came into sight being particularly noteworthy. After arriving at Chichester (over one hour late) we got a taxi to Church Norton with the last half a mile being a walk down a gridlocked lane, reminding me of the scene on approaching the East Yorkshire Little Bustard twitch on its first afternoon a year or so ago.

Joined the crowds watching the Term colony from the base of the churchyard and had brief looks of the Elegant Tern within a few minutes. This was my only sighting of it on the deck, the colour, distinctive shape and length of the bill reminded me of the birds seen in California. Soon moved down the line of twitchers for a different angle in better light and over the next hour saw the bird several times in flight before watching it head out over the seawall when the local Peregrine paid the terns a visit (1240). Before being spooked it spent nearly all of its time out of sight, and when not focussing on the area below the 'silver car', 'pink house' or the 'basketball hoop' (or was it a satellite dish?) the "cawwing" Mediterranean Gulls were a nice distraction, but they very much played second fiddle on this occasion. Bit of an understatement to say that the Elegant Tern was a nice bird to see, it's not yet sunk in as to how rare this sighting was, perhaps a first for GB given the difficulties of getting this species accepted. 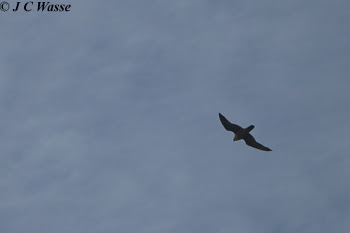 The journey back by similar transport means except for catching the bus from the reserve entrance back north to Chichester. Made time to look at an adult Peregrine devouring a pigeon at Chichester Cathedral before the train back to London town.