Back on Cyprus for the second time, first visit in Spring. Staying again in the north west at Droushia and first day (Sun 10th) spent in roughly the north west area. Having been rudely awoken by a pair of duetting (Cyprus) Scop's Owls at 01:00 the day, how dare they :)  , the day turned into a pleasant yet warm one with temps in the low 20s. Early cloud cover gave way to sunny afternoon skies with a gentle westerly breeze. The skies dominated by (Barn) Swallows and the land by Sardinian Warblers. The Baths of Aphrodite held few migrants early morning, but a Red-rumped Swallow was noteworthy and at least 2 male Cyprus Pied Wheatears showed well giving their 'electric' song, trying their best to be heard over the monotonous Sardinian Warbler background. Several lone Long-legged Buzzards took to the air in the north west, big beasts (one shown below together with its smaller cousin - boc). A colony of Spanish Sparrows at Theletra Gorge were nice to see as the 'House' variety were all over the towns and villages. Nearby a Squacco Heron crossed Evertou Dam and a Wood Warbler was feeding up in a tree by the track to the Dam. Late afternoon visit to Cape Drepanum produced a flock of 50 Glossy Ibises north and on terra firma bucket fulls of Crested Larks, singles of Whinchat, Fan-tailed Warbler and Woodchat Shrike. A couple of skittish flocks totalling about a dozen 'Flava' Wagtails comprised Blue-headed and Black-headed. Brief looks at a Wheatear (Northern/Isabelline). A few hours earlier at Droushia near the hotel a different ID challenge, a female Ficedula sp. Big white wing panel and decent white wing 'drop' patch but no 2nd wingbar. Mournful peep call when alarmed. Absence of 2nd wingbar suggests Collared Flycatcher? The day ended venturing a little south to connect with another (Cyprus) Scop's Owl- one calling bird near 'Mavro' Dam at dusk and it's mate seen in flight crossing the valley. A flock of 10 'kwoking' Night Herons flew high overhead and Chukar seen here on the tops.  This cracking location held Cyprus Pied Wheatear and a Common Buzzard (boc photo (bottom) below, points to Steppe?) attracted the attention of a Kestrel and Hooded Crows. Not to forget those pesky Sardinian Warblers that seemed to be in every bush! 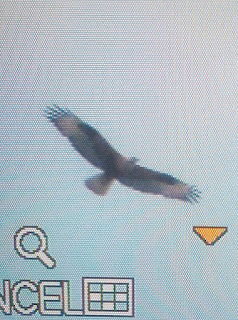 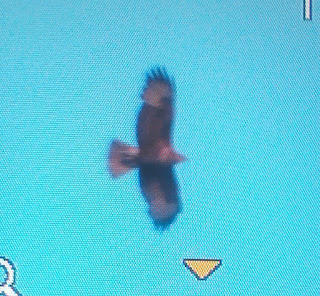 A Hoopoe tried to give me a race as it flew alongside the car near Kathikas on returning to Cape Drepanum early morning (Mon 11th). At the headland it looked like an overnight clear out, very quiet. Of note a Greenshank eluded me as it called overhead going fast north, but a male Spanish Sparrow was seen present by the small harbour. Off to Paphos Headland and there were several Brit birders on site. Quiet for migrants at first, seemed like more birders present than migrant birds, but it seemed to pick up as the morning progressed. A couple of flocks of Bee-eaters (6 and 9) moved through and a Nightingale showed well. 'Flava' Wagtails flew around the headland producing no opprtunity for racial id and a couple of Red-throated Pipits offered brief looks only, and would have been easily overlooked if they hadn't given their distinctive 'spee' call. A flock of Spoonbills/Egrets remained unidentified as they disapoeared north and into the heat haze. 2 Whinchats showed and most bizarrely on leaving the site a pale phase adult Arctic Skua flew nonchalantly high west over the headland. A couple on site had told me earlier of a Hooded Wheatear, a rare visitor to Cyprus, they had found the previous day on the coast by Paphos airport. I decided to check it out as it was only 15 mins or so away, and after no sign it was picked up on the coastal fringe. A stunning bird, nice to see it in good light and at close quarters, interesting feeding behaviour very keen to hover in pursuit of an insect. Boc comparison photos of Cyprus Pied Wheatear (top) and Hooded Wheatear (bottom) below. Nearby a Black Francolin called but would not show itself. Spent the rest of the afternoon and evening an hour's drive to the east on the Akrotiri peninsula. The church near Akrotiri village held a lone male Pied Flycatcher but by now a strong westerly winds had developed making birding uncomfortable and no doubt keeping passerines down. Lady's Mile held Kentish Plovers and Little Stints plus 3 Greater Flamingoes, whilst a Northern Wheatear moved along the shingle/scrub across the road. Zakaki Pools held Water Rail, 7 Ferruginous Ducks, 5 squabbling Little Egrets and an onlooking Cattle Egret amongst other species. Again the strong wind wasn't helping and it got a bit parky as dusk approached. The scrub produced flight views of Black Francolin, a scolding Spectacled Warbler and a more peaceful Hoopoe. 4 Glossy Ibis roosted on the salt lake edge, which seemed miles away, the lake also sported a quartering cc Marsh Harrier. A nice way to end the birding day. As I type the overnight rain has started, thundery showers expected through the day tomorrow. 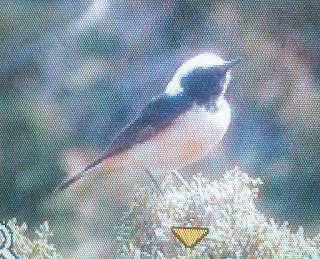 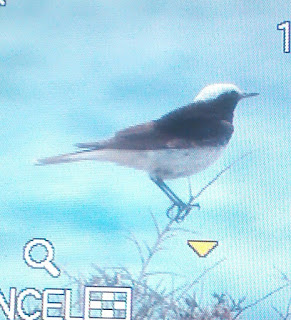