Overnight rain eased first thing and after breakfast I was off to Akrotiri arriving at 0930 at the church SW of the village on the edge of Akrotiri Plain (Tues 12th). Birded this area with an English/Finnish couple of Cyprus Brown-necked Raven fame, excellent company and it was nice to gain some birding gen for the area. Migrants were in but it was still slow, Woodchat Shrike and Wryneck showed nicely with Whinchat and Pied Flycatcher for company. Pipits and Wagtails called overhead and a group of 6 Tawny Pipits were in the dune like scrub. Next stop Bishop's Pool. The walk from the road was productive with 2 smart male Collared Flycatchers present and a female Pied Flycatcher. An Eastern Olivaceous Warbler sung by the entrance and Spanish Sparrows were mixed in with House Sparrows around the farm buildings. Overhead several Red-rumped Swallows joined (Barn) Swallows, Sand and House Martins. A majestic Alpine Swift mother ship drifted by flanked by 2 Common Swift fighters, rather apt for the location. The pool held chuntering Common Sandpipers, a Purple Heron trying to hide in the reeds and 4 Ferruginous Ducks a sleeping. At least 1 Pied Flycatcher, up to 2 Wood Warblers and a Willow/Chiff enjoyed insects in the trees by the steps leading down to the pool. Phassouri reedbeds next stop. Birders involved with local conservation kindly pointed to 3 Blue-cheeked Bee-eaters (took a while to enter this due to fighting Google Keep spell checker) perched on the remaining reedbed tops, the area has been desimated by fire. Nearby 6 Glossy Ibis mooched around grassland in their typical manner and close by the Akrotiri Gravel Pits were none discript in both looks and occupants, spooked a lone Little Egret. Black Francolins called, both close and distant. Mid afternoon headed back west and tried the cliffs near Aphrodite's Rock for Eleonora's Falcon, not in at the moment and fields by the coast at Mandria held a couple of Northern Wheatears only. Near Acheliea the soakway was arid and the 2 Alsatian wannabies running alongside the car near Paphos sewage works persuaded me to leave the area sharpish. Fair play the one keeping up with the car at around 30 kmh about to savage a wing mirror was in good condition. Ended the day near Mavro. Dam where at least 2 Scop's Owl called and one showed on wires for a minute in the fading light. Cyprus Pied Wheatears were everywhere, as were Sardinian Warblers and Chukars were easy to see. A male Collared Flycatcher that popped up in a bush was perhaps unexpected, and it look like it was going to roost here. A Little Owl added to variety as it sat near a cliff top taking in the cool evening air. I think it flew off before a Chukar (phonecoped below) trod on it. On arriving back at the hotel the local Scop's Owl pair were again vocal. 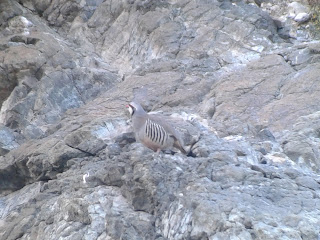 No obvious migrants at the church on Akritori Plain this morning (13th) but nice to catch up with Cyprus Warbler - 1 or 2 singing males. Decided to venture north to the Troodos mountains to see the speciality subspecies around Troodos village. Alpine like scenery and a sharp temperature drop from 22C at Akrotiri to barely 8C at an elevation of over 1700m. A stop at a picnic site 2km east of Troodos village had patches of unmelted snow! This quiet spot held several 'Dorothy's' Short-toed Treecreeper, the sooty bellied (Cyprus) Coal Tit  and the (Cyprus) Jay. The latter was very shy and to be honest from the briefest of views it looked like how a Jay does back home. A silhouetted (Cyprus) Crossbill flew over calling. Wren, Blackbird and a pair of Masked Shrikes were present and a Cuckoo called in the distance. Nearby at Troodos village it was possible to see the specialties and Swifts over the village, well in the cloudy and drizzly conditions I couldn't safely identify them. Back down the road to Limmasol and a stop at the comparatively sweltering Zakaki Marsh produced looks at a male Little Crake and a Squacco Heron (boc photo below) was on the brown island at the back of the pool. Drove west arriving late afternoon at Aspro. Dam to the east of Paphos. As to be expected Sardinian Warblers scolded from scrubland bushes, a Willow/Chiff flitted about the trees north of the car park which held an elusive Pied Flycatcher. Venturing through the trees to the open area looking north over the Dam was a wise move. A flock of 80 Yellow-legged Gulls on the water or circling the Dam contained a subad/adult Baltic (LBB) Gull. A grey shape floating over the cliff edge looked interesting but it was passed off as another gull because it disappeared and an adult Yellow-legged Gull appeared from that location soon after heading out over the Dam. Glad I looked skywards a few minutes later as the grey shape was in fact an adult male Pallid Harrier. It circled with the gulls for several minutes and departed in a fast glide north. Wow, a stunner! A small flock of Short-toed Larks (15-20) fed in a stony field which was patrolled by a male Marsh Harrier. A female had drifted by earlier and to the south 3 or 4 Alpine Swifts were in the sky to the east of Mandria. Trip list ticking over. 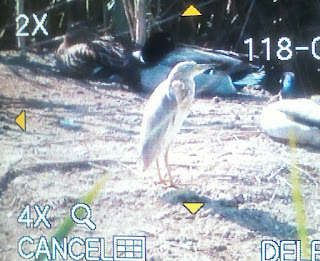