Mon 12 Oct 2015. As is standard started off at Higbees first thing. I gave it one hour and there were the ubiquitous Yellow-rumped Warblers, but several other warblers were showing, namely singles of Black-throated Green and Nashville, plus 2 or 3 Blackpolls. A pair of Eastern Bluebirds flew over giving their quiet call and several Sparrows were present, mainly around the central track - Song, White-throated, Swamp and Field varieties. Around noon and the wind switched to a southerly direction so I ventured off the 'island' taking in the Atlantic marshes up to Avalon. Firstly Nummy's Island then Scotch Bonnet followed by the Wetlands Institute all within the vicinity of the town of Stone Harbour, with a detour to the beach at the beginning of Stone Harbour Point en route. Low tide meant not seeing many waders, American Oystercatcher and Grey Plover easily seen at Nummy's and a flock of 20+ Sanderling at Stone Harbour held singles of Western Sandpiper, Dunlin and Semipalmated Plover. Little Blue Herons present throughout the back bay marshes at most stops, and the Wetlands Institute yielded 2 Tricoloured Herons and a Golden-crowned Kinglet in the car park. Approaching Avalon the Night Heron rookery held a couple of Black-crowneds. Nearby I spent about a couple of hours seawatching at the Avalon seawatch, well worth a visit when in Cape May. Saw both Surf and Black Scoters, not big numbers at this stage of the season say a dozen or so of each, but one mixed flock of about 20 birds held perhaps surprisingly a drake American Wigeon and 2 Green-winged Teal. Forster's and Royal Terns lingered offshore and American Herring Gulls gave good photo opportunities. Then off to one of my favourite places, Jake's Landing Road on the Delaware Bay marshes for the final hour of daylight. At least 6 Northern Harriers patrolled the marshes, min. 4 juvs, 1 ad female and 1 ad male 'grey ghost'. A Peregrine flew by and rested on one of the many snags as a Merlin flew inland. As dusk approached 2 or 3 imm. Bald Eagles made their way along the skyline to their respective roosts. American Black Duck noted and loads of Great White Egrets present. A flock of 100 strong Night Herons landed on the marsh across the channel. All I could make out were Black-crowneds. Hidden birds at this location were calling Clapper Rails (elusive and quieter than in Spring), Marsh Wrens and a lone distant Seaside Sparrow. A Savannah Sparrow in the car park was noted but not unusual for this locality. 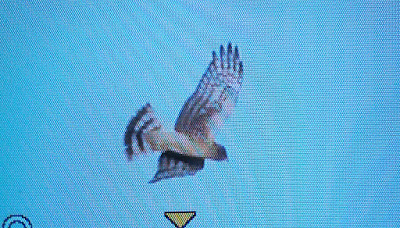 Tue 13 Oct 2015. Higbees again first thing. Southerly winds and warm, migration slow but the Bell's Vireo continued for its 3rd day and showed briefly but well. A quick look at the Hawkwatch, blue skies and all quiet on the raptor front. Back to Stone Harbour for a couple of hours mid pm, and a walk along the Point. Many waders on the sideline and shallow beach pools. Sanderling dominated and were joined by half a dozen Western Sandpipers scattered across a mile or so of beach plus occasional American Oystercatchers. The stunning Piping Plover, precious to this coastline, were present (2) and several Semipalmated Plovers could be found. They were skittish at first as an Arctic Skua took a fancy to the nearby loafing gulls spooking all before heading north over the sea. On the beach pools Grey Plover, Dunlin and Knot were present and a group of a dozen Short-billed Dowitchers bathed briefly before flying to the marshy side of the Point, betraying there identity by calling in flight. Looking on the marshy side more waders shimmered in the heat haze including distant Dowitchers, Grey Plovers and American Oystercatchers. 500 Brent Geese congregated here and both Caspian and Royal Terns were seen with Forster's Terns patrolling the beach. Of the gulls there were a couple of groups of GBB Gulls (20 each) joined in decreasing numbers by comparison of American Herring and Ring-billed Gulls. A couple of adult LBB Gulls could be found as well. Back to the Hawkwatch at Cape May Point and had missed another Golden Eagle. However, it was nice to see a pair of Bald Eagles soaring over the town, plus a Dickcissel feeding with the platform's House Sparrow flock. A juv. Northern Harrier hunted over both Bunker and Lighthouse Ponds, and a Common Nighthawk was flying around well before sunset. A Yellow-bellied Sapsucker frequented a Siberian Elm at the Point which also hosted a single Pine Warbler and the obligatory Yellow-rumped Warblers. As day turned to night a front approached bringing lightning on its leading edge drifting closer and closer to the Point.