Cape May: Getting better and better

Started by twitching the Western Kingbird at Cox Hall Creek WMA, the former Ponderlodge Golf Course near Villas a few miles north of Cape May on the Delaware Bayshore. The visitor from out west had been seen late the previous afternoon and had roosted overnight. It showed well by the car park overlooking the lake. (BOC photo below) A lifer and much hoped for bird for this trip. Spent the rest of the day on Cape Island connecting again with the Bell's Vireo at Higbees, the to be expected Yellow-rumped Warblers pluse the briefest of views of a Tennessee Warbler. Chilled out at the Hawkwatch and took in the Point gardens where a Yellow-bellied Sapsucker was glued to a Siberian Elm on the Point which held a Pine Warbler amongst the busy 'Butter-butts'. Eastern Phoebes patrolled a nearby fence line. During the day took time out to look for butterflies in the vicinity of the Triangle Park on Lighthouse Avenue, connecting with a scarcity in the form of a Sleepy Orange plus Variegated Fritillary and the irruptive Ocola Skippers amongst the commoner species. Back to birding and a visit to the Meadows at dusk yielded a variety of ducks- American Wigeon  flock (10) with its lone drake Eurasian Wigeon friend, both the east coast Teal, Pintail, Shoveler, Mallard, Gadwall and American Black Duck. A Common Nighthawk flew over as the light fell. 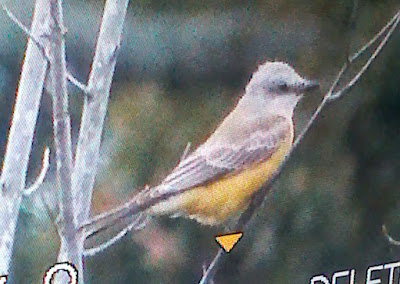 Wow, where do I begin? The start is normally best... Left the motel shortly before 07:00 and on driving to a coffee stop birds were on the move flying in front of the car and hopping from tree to tree. The overnight and continuing NW winds sparked a movement. Only on arriving at Higbees could I begin to take it in. Birds were everywhere and birders were congregating by the platform on the edge of the first field, where the Bell's Vireo favoured. It duly showed well but briefly during the couple of hours I was glued to this spot but it was overshadowed by the reverse migration that was taking place. Wave upon wave of Yellow-rumped Warblers filtered northwards through the trees and bushes along the field edge. Lots of Ruby-crowned Kinglets on the move as well as Palm Warblers. Only saw a single Golden-crowned Kinglet. Sparrows were in, dominated by Swamp but Song and White-throated Sparrows were noticeable and connected with several Dark-eyed Juncos in the mêlée. A variety of other Warblers including Tennessee, Nashville, Black-throated Green, Blackpoll, a late Black-and-white, and Common Yellowthroats were at ground level. Up above Eastern Phoebes were regular in the tree tops. Cedar Waxwings and Red-winged Blackbirds flew by and squadrons of Northern Flickers were joined by a lone immature Red-headed Woodpecker. American Robins noted migrating and pair of Rusty Blackbirds alighted in the tree tops before being spooked by one of the many Sharp-shinned Hawks looking for breakfast. The Rusty Blackbirds- a lifer! Singles of both Blue-headed and White-eyed Vireos made it 3 Vireo species for me, but I could not get on a Red-eyed Vireo.

Loads of Yellow-rumped Warblers at Cape May Point State Park and the Cedars by the Hawkwatch platform held singles of Pine, Bay-breasted, Blackpoll and Black-throated Green. However, despite not being present for yet another Golden Eagle, the highlight of the day for me was the first of the season light morph juv. Swainson's Hawk that made 3 passes of the hawkwatchers, often joining a kettle of Turkey Vultures. The elegant wing shape of this rare wanderer from out west (grainy BOC record photo below) was evident as were the characteristic underparts/wings in the field. Of note were two adult Bald Eagles talon grappling in mid air, a spectacle drawing gasps from the onlookers. Connected with most of the other raptors on the move, but a lot were miles high in the blue sky that made locating lone birds tricky. Nearby loads of Arctic Skuas (ca. 50) were chasing Gulls/Terns in the rips off the Point late afternoon. This number being very noteworthy for Cape May.

What a day, enjoyed by many! I heard that 10,000 birds were tallied at the morning flight. 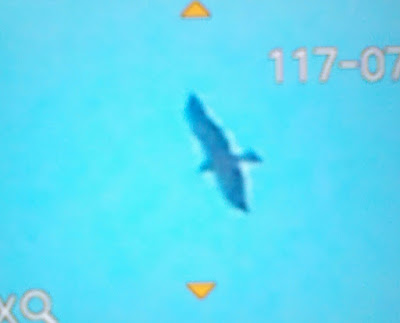