Birding Blast from the Past 8 - American Bittern, Lancashire, Sunday 10 March 1991

American Bittern - maybe not a once in a lifetime rarity here in Great Britain, but difficult to predict when the next one will occur and then will it be accessible? Started birding in 1987 this being several years after the then last? twitchable one this side of the pond, when an American Bittern was present in Wales in late 1981 continuing into 1982. Therefore, the opportunity to twitch the Marton Mere, Blackpool bird in March 1991 was very welcome. This bird had been present since late January staying into May.
Arrived on site (Sunday 10 March 1991) and remember we had a long walk on a cold and grey winter's day towards a reedbed fringed channel. Along the walk life-ticked a wintering Cetti's Warbler, which gave fantastic views out in the open, scolding anything in sight. Thought these were tricky to see? Still the best views I've had to date of this species. Eventually joined the birders on site looking for the American Bittern to news that it had not been seen for a good while. It could have been 30 or 40 minutes later I wandered off to try viewing the area from a different angle. A few minutes later I saw the bird fly out of the reeds in front of a birder further along the track near the channel. I was lucky as it landed in front of me giving excellent views, I managed to take the photos shown below. A streamline 'Bittern' with warm colours and the rufous neck stripes prominent. When seen in flight the characteristic upperwing pattern where the plain inner wing contrasted with the flight feathers especially a secondary bar, was noticeable. 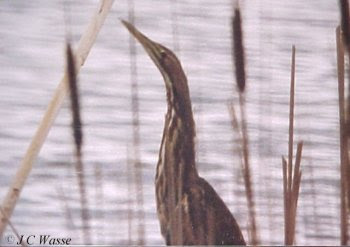 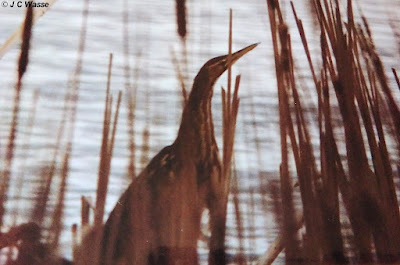 I've been lucky to visit Cape May, NJ, USA quite a few times and had several opportunities to see American Bittern on autumn passage frequenting the reed fringed Bunker Pond or the Meadows at Cape May Point. Conversely, scarce to rare in Spring, only glimpsed the bird on a couple of occasions but did hear the strange pumping boom at a marsh in northern New Jersey during one of our World Series of Birding runs. The photos below are from Cape May in 2001. 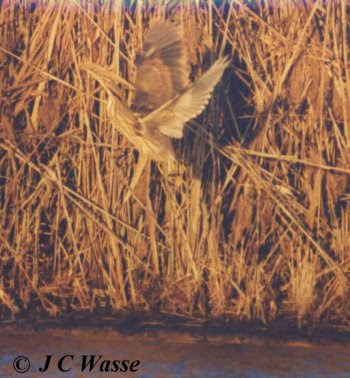