A Great Shearwater and a Magical Hare

20 mph plus northerly winds gusting to about twice that, spray and pulses of rain with a roaring sea and equally leaden skies, about 10C and layered up scoping to the south could only mean one thing...a Flamborough Head (Yorkshire) end of August seawatch!

Arrived for the typically quiet late morning shift where from the alcove I picked out a few year tick Sooty and Manx Shearwaters moving north and a blogging Great Skua. Fantastic to see a continuous stream of Gannets and Fulmars flying into the wind. Wigeon and Teal on the move as were pale bellied Brent Geese, perhaps having overshot their western or north-eastern wintering quarters. Midday and time to dry out and have a break, returned to the the car which was buffeted by the relentless northerly. Round 2 after 3pm, but this time from the wall by the foghorn station. The Gannets and Fulmar tap remained on and a few more Manx Shearwaters went north. With the focus on birds from the south only had quick views of a couple of Arctic Skuas disappearing into Bridlington Bay. The wind seemed to be coming in at all angles as it whipped round the wall making seawatching uncomfortable with unpredictable gusts. This was all forgotten when scoping south at the first line of Gannets just before 5pm. I was straight onto a large Shearwater hanging low over the waves coming north. As I called it a birder sat nearby got onto it with the other birder present soon onto this magnificent ocean wanderer. The light was fantastic, neutral. Quickly identified as a Great Shearwater, the isolated dark cap a striking feature and easy to get onto. Unknown to us, it was being watched independently from elsewhere on the headland where some fantastic video footage was captured by Jono Leadley, please see here. The footage matches the typical views we had from the cliff top, slow shearing and decent looks of the features such as contrasting dark brown upperwing with essentially white underparts. Closer inspection showed the characteristic underwing bar with the isolated dark cap mentioned above, and even the dark bill noted. However, I couldn't pick out the dark belly patch but have struggled to see this feature in the past unless really close views such as some from a Scillonian Pelagic. Still buzzing on leaving half hour later as the cold and damp began to bite back.Further down the Yorkshire coast at Kilnsea, Spurn connected with the fearless Wryneck by the Canal Scrape car park, where a Wood Sandpiper called as it flew overhead, Whinchats and Wheatear by the seawatch hide. Whilst a seawatch was quiet the Canal Scrape Bittern did a distant flyover of the Kilnsea Triangle. Kilnsea Wetlands still a draw with Mediterranean Gulls advancing in their winter dress, a couple of bright juvenile Little Stints and the much larger trio of Spoonbills were in the far corner. Two Short-eared Owls tangled with opposite the wetlands and a pale Buzzard had a brief dispute with a Marsh Harrier. 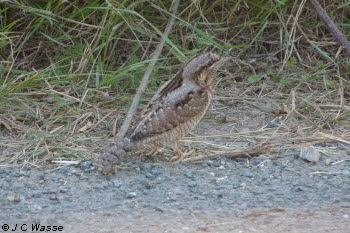 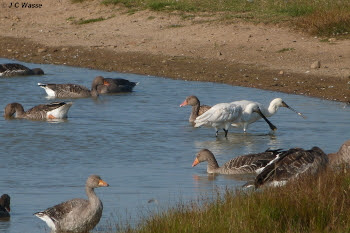 Inland the moorland edge yielded passage Marsh Harriers, the sight of 3 together was impressive. They soon moved on. A Short-eared Owl was very noteworthy, no doubt a passage bird as well and its appearance coincided with a notable increase on the east coast. Merlin hunted Meadow Pipits and on a warm sunny day a couple of Hobbies sighted. One made a passing interest in squabbling Ravens and Buzzards before leaving them to it, more the job of a feisty juvenile Peregrine to annoy them. Elsewhere, Accipiters had a bit of a row! An influx of Siskin with one site producing up to 200 moving about one morning with up to 20 Crossbills regularly heard and seen in the treetops on calm days. A Mountain Hare added to the variety along a moorland track where a group of Golden Plovers headed out west. 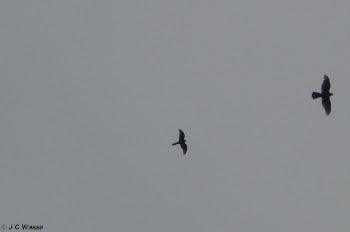 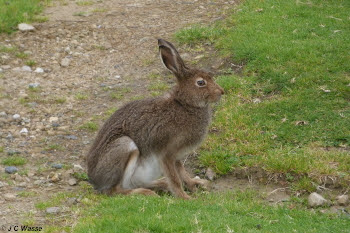