Birding Blog Update Oct/Nov - or a wintering Finsch, wandering Pink-feet and waders in for the winter 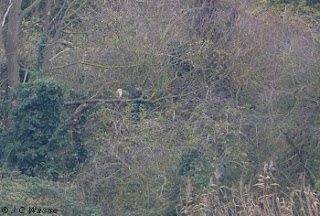 Early to mid November and much needed water on the reserve making the site a haven for wintering duck. Whistling Wigeon, calling Teal and the quiet Pintail present for the season. Buzzards are now to be expected and Marsh Harriers spook the duck and Lapwings. Of the waders in the area about 700 Dunlin to be found on the Thames shore, their presence a bit erratic due to a wealth of feeding opportunity along the river and the state of the tide. Up to 500 Black-tailed Godwits find the reserve's Target and Aveley Pools sanctuary at high tide with Curlew present, several commuting between the Thames shore and the winter flash. A flock of about 30 Avocets could be in for the winter. A lone (the same?) Brent Goose seen on a couple of visits, they always give the impression of not sure what to do next once having flown around Aveley Bay. Passerines on site include wintering Stonechat and a cracking Firecrest on the woodland edge mid month. Barn Owl hunting the marsh late afternoon mid month. 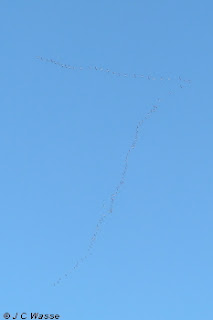 Despite the rain and generally leaden skies a couple of visits saw Buzzards airborne and Sparrowhawks and Kestrel hunting the moorland edge. No obvious Crossbills as present earlier in the year, no doubt they will be wandering around the woodlands that cloak the reservoirs on the South Yorkshire moorland edge. A few Bramblings noted at a couple of sites, could it be a Brambling winter, or will they move through? Characteristic of this area are groups of Fieldfare looking for food. Nice views of one flock of about 500 Fieldfares that hosted several Redwings. One morning, and before the fog rolled in, turning into low cloud cover, 3 skeins of Pink-footed Geese (170 + 150 + 95) flew quickly east over a moorland valley.

Still hoping for a 'Rough-legged' winter! 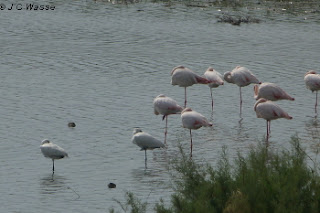 A visit in mid October produced a nice variety of species. It was hot throughout but the afternoon breeze made birding comfortable. Raptors were a highlight, aren't they always! Young Eleonora's Falcons tussled with each other along the cliffs northeast of Akrotiri and nearby down on the peninsula Red-footed Falcons and Hobbies hawked insects over Akrotiri Marsh (Phassouri Reedbeds). In the north west the dry landscape about Evretou Dam saw 2 Goshawks move through, the local Long-legged Buzzards, keeping a close eye on them. Likewise a flock of terrified Woodpigeons. Greater Sandpipers had returned to Paphos Headland for the winter and the first returning Finsch's Wheatear played hide and seek at Anarita Park. Out east Oroklini Marsh glowed in the early evening light home to a roost of Cattle Egrets, Greater Flamingoes and hundreds of White Wagtails with a very good supporting cast including Spoonbills, Ferruginous Duck and Water Rail amongst others.

A full trip report can be found by clicking here. 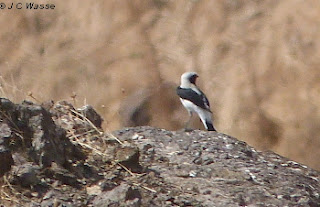 Brief video footage of this very smart wintering Wheatear up at Anarita Park in the hills to the north east of Paphos. A known wintering site. 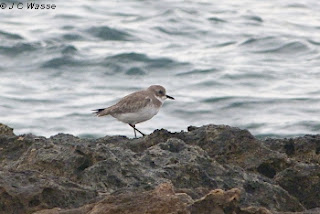 Video footage of one of 2 birds present at the tip of the headland, footage taken during a very welcome rain shower.