The wintering Avocet frequenting Aveley Bay continued with 24 noted (10th). Just across the river wall Rainham Marshes RSPB attracted other waders at high tide on this day including up to 100 Black-tailed Godwits. Whilst the swirling flocks of Godwits and whistling Wigeon were a fine sight in the late afternoon twilight, it was a matter of life or death for the performers. A big female Peregrine was after its tea! She looked regal sitting out on the winter marsh surveying the mayhem overhead. Earlier in the day a singing male Blackcap near Purfleet station was undoubtedly a winterer.

The following day (11th) I twitched the Little Bunting found a few weeks earlier in  North London up at Walthamstow Wetlands. This example of the secret winterer lived up to the species' reputation as it showed briefly that morning for 10 mins just after 09:30 with a repeat performance as it perched up and flitted about its favourite bush above a patch of scrub again at 10:05. Then there was no further sign up until leaving at 12:00. Sightings of the rare Bunting were mainly alongside several Reed Buntings but occasionally on its lonesome. It called on one occasion as it and a Reed Bunting chased each other away from the bush. Nearby the dapper drake Scaup showed well on Reservoir No. 4 swimming with its Tufted Duck and Pochard mates. 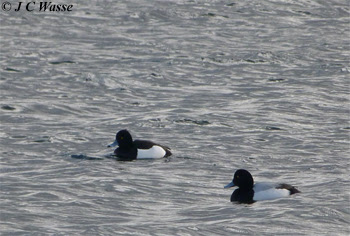 Mid February (17th) birding in London included a walk down the Thames shore from near the Stone Barges to the RSPB centre at Rainham Marshes (17th). Whilst a nice variety of waders were on show, the partial summer-plumaged adult Mediterranean Gull roosting amongst the many Black-headed Gulls at Cold Harbour Point was my highlight. Only picked it up on zooming in to read the code of a colour-ringed  (yellow) adult Black-headed Gull a few gulls to its right (to be chased up but looks like a local Rainham/Pitsea bird.) Of the waders approximately 100 each of Dunlin and Black-tailed Godwits were seen and my first Oystercatchers of the year back along this stretch of the Thames. In the afternoon the sun warmed up the air giving a couple of pairs of local Buzzards to take to the skies to the north of the Eurostar railway line. The warm air encouraged many birds to start singing including Song Thrushes and Reed Buntings. 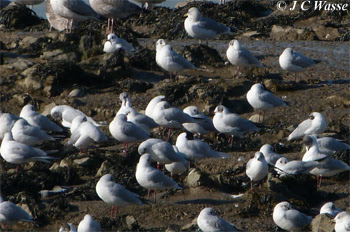 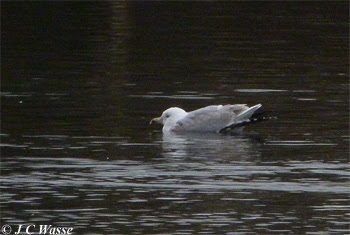 Back at Walthamstow Wetlands (24th and 25th) to look for the Little Bunting. Several hours dipping on the 24th, but as it was seen after I left a return visit was on the cards the following morning. The drake Scaup was seen from the train  on the first visit. On the return visit the Little Bunting flew into the tree by the path calling as it landed. Barely glimpsed before flying into the hedgerow and dropping down into the scrub half way between the hedgerow and the seed tray. All in a blink of an eye just after 10:00. It remained hidden until just before 13:30 when it appeared out of nowhere sitting close to a male Reed Bunting in its favourite bush. The first photo below doesn't do it justice, it showed brilliantly in good light conditions allowing for a good study. After most of the crowd had seen it, it flew into the scrub and made its way to the seed tray where it was present for about 5 mins before returning to the bush, to melt away into the cover. Whilst waiting for the star attraction birders were entertained by a pair of Peregrines patrolling the north London skyline, two grunting Egyptian Geese, screaming Ring-necked Parakeets, and a nice study of Reed Bunting in varying plumage. Cetti's Warblers had made it to this urban wetland. It was a cold sunny day and the easterly wind was beginning to bite, signalling the onset of the weather pattern dubbed the 'Beast of the East'. 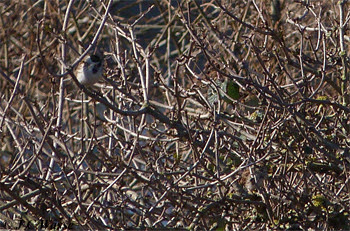 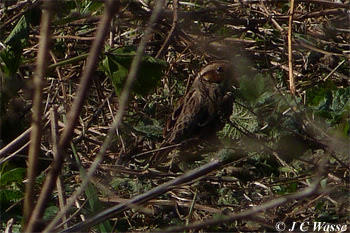 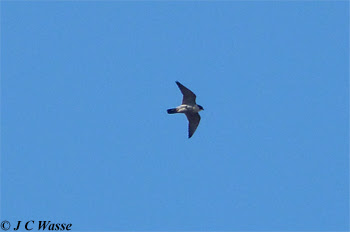 
Travelled back home to Yorkshire by coach Friday Eve (2nd March), Storm Emma was taking on the Beast and produced a band of light snow that hit London earlier in the afternoon, dragging it's heels on moving north that evening. Travelling up the M1 the coach made light work of the wintriness. Birded my local patch the 'Wath Area' (3rd and 4th) and with my dad and several patch regulars connected with the Yellow-browed Warbler and Firecrest found a few days earlier in bushes and scrub bordering the River Dearne. The river skirts the north and east side of RSPB Wombwell Ings. Good views of both over the weekend, a shame the Richard's Pipt of recent days didn't show. I believe the study of the Pipit resulted in the finding of the 'Yellow-browy' and rare 'Crest'. Nevertheless, Yellow-browed Warbler Wath Tick #192 for me. 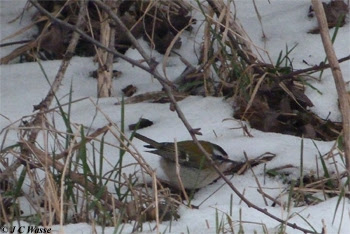 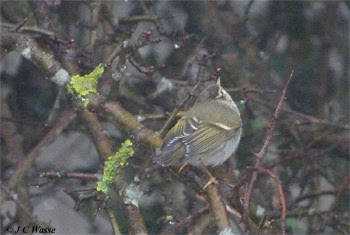 On the Saturday walking by the floodbank just before 09:00 following the river and a Water Pipit called. I didn't react immediately, just a Water Pipit, then the cogs turned... this was South Yorkshire not Rainham Marshes where Water Pipit is seen and heard on a regular basis in the winter months. It's a bit scarcer up here, only my 2nd sighting back home. I picked it up perched on a snag by the main bend in the river, a typical winter-plumaged bird. It flew across the river settled briefly on the far bank before taking off calling heading towards the road bridge. Presumably the flighty bird seen earlier across the Dearne Valley Parkway at Old Moor RSPB. In flight it flashed it's white outer tail feathers.

Other birds of note were singles of both Pink-footed Goose and Barnacle Goose touring the area with the many local Canadas and Greylags. Whereas the 'Pink-foot' is probably of Icelandic origin, can a wild origin be attributed to the Barnacle? Clutching at straws for a Wath, Barnsley and Yorkshire tick! With Wombwell Ings mostly frozen over the river held more than just it's scarce passerines. Teal, Tufted Ducks and several Goosander were present as were Meadow Pipits looking out of place at the edge of the river. A Chiffchaff and several Goldcrests present and a couple of Grey Wagtails were more typical of this environment. A glance back onto the floodplain of the Ings revealed a Little Egret looked fed up as it cowered from the cold wind, with Lapwing and Golden Plover adding to the variety. Over the field to the south the Hawfinch continued its stay peering down on passing traffic from Broomhill Flash car park where a pair of Bullfinches were also present.

A couple of sorties onto the moorland edge. The scenery glowed in the late winter snow, but as a slow thaw was starting the air misty if not foggy making skywatching not possible. Nevertheless, the feeders at Low Moor and Broomhead Reservoir (Rushy Lane) attracted a pair of Great Spotted Woodpeckers at the former, and Coal Tits dominated the latter. Sadly no Crossbills on show. 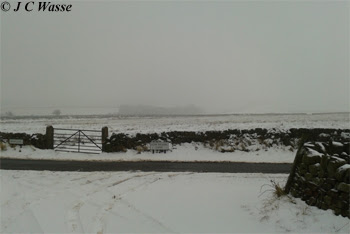 Back at Rainham and the wintering Avocets still frequented Aveley Bay (10th March) but fake news, namely a fake 'white-winged gull' resting on the Stone Barges gantry. This colour-ringed (black) individual, too far to read the ring, had the feel of a leucistic bird... adult Great Black-backed Gull? It turns out to be a 5th winter of this species, ringed in Norway, with thanks to Twitter correspondents for the details. 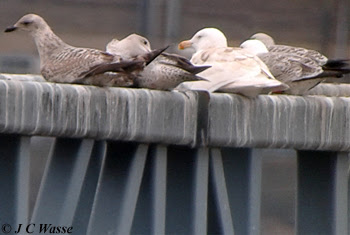