Back home at Easter and the moorlands coming alive. Buzzards patrolled the ridges and nearby tree clad reservoirs, some had more trees than others following felling last year. Merlin are back, a Short-eared Owl tangled with a Buzzard at distance, more likely a wanderer than summer resident, and Ring Ouzels were back on territory and in song, although Stonechats tried to out sing them. More returning summer visitors included Swallows to upland farm buildings and Willow Warblers that turned up the volume as the week progressed from the valley bottom, but a returning Pied Flycatcher at one location was focussed on getting its bearings as it remained silent. Redstarts appeared to have declined in recent years so a singing male "whirring" from a Beck was nice to note, and a Tree Pipit "buzzed" by one morning, will it stay to nest, or is this species to be just seen on passage, only time will tell if it hasn't done so already. Roding Woodcock noted at dusk. 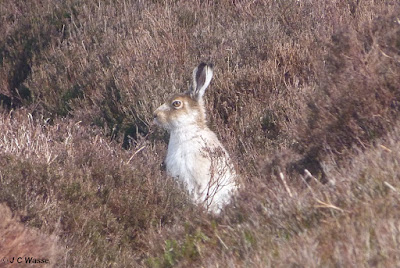 Elsewhere, Old Moor RSPB looked impressive with a booming Bittern barely audible over the din of Black-headed Gulls that went silent when Marsh Harriers took flight. Buzzards were up high and Sparrowhawks displayed.