A Belter of a Kingfisher, a Scoter with attitude and a scarce Sentinel

More than sixteen years after dipping the Belted Kingfisher in Scotland, the third for GB, like others I had the chance to twitch the next one, an elusive Belted Kingfisher present for several weeks in Lancashire. Arrived on site near Preston on a frosty December morning and it gave itself up after 30 minutes, this wait felt like 16 years! Before it showed it teased the early morning birders giving the distinctive rattle from an out of sight perch. A belter of a Kingfisher it showed well for half an hour. Too distant for photos, and I wanted to take in the sighting, so here's a photo of one from Cape May, New Jersey, USA. 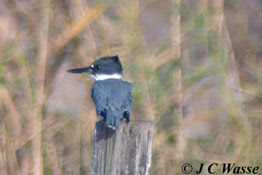 Continuing the Nearctic theme, how about a Scoter with attitude, namely the adult drake Black Scoter present in the Common Scoter flock off Bamburgh, Northumberland. Having caught up with this returning drake further up the coast off Goswick in December 2019 I wanted another look, especially as Black Scoters aren't just Common Scoters with an orange bill. Arrived at Stag Rocks one late December mid morning to the north of the stunning Bamburgh Castle where the light was good but the sea was a bit choppy as the never ending windy theme of the period persisted. On arrival a skein of about 70 Pink-footed Geese flew low north battling the breeze. 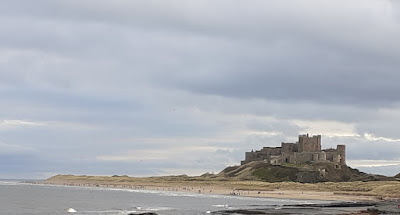 Taking shelter by the small lighthouse the main Scoter flock was to the north of the Farne Islands, about but just inside the line of a a green buoy. Not great, but they were soon on the move flying and drifting closer to shore, ending up no closer than mid distance and heading slowly north over the next couple of hours. The good light meant the Common Scoter flock looked like a mainly brown mass, not just a silhouetted mass, on the surface of the sea. This being indicative of the flock (ca. 400) being dominated by female/immatures. Several adult drake Common Scoter present making it easier to look for the drake Black Scoter. All of a sudden about half of the flock took flight and there it was, the one with the bulbous orange bill which served as a beacon in flight. On seeing it land could then study it further and when drifting alongside drake Common Scoters it looked thick necked, the head looked a bit box-shaped and then there was the bill with the orange blob dominating even at mid distance. The light was good to allow the slight orange to the bill of drake Common Scoters to be seen in profile and head-on as well. The behaviour of the Black Scoter was interesting, it had a bit of attitude, it would power through the flock moving from one end to the other in quick time, almost with a periscope neck appearance, as if always on alert. Also seen driving forward on the surface of the sea with its head down as if chasing others, much like a Coot running on the water in a tantrum. The Common Scoter instead seemed to be calm, minding their own business and interested in feeding through synchronised diving. The Black Scoter was not always in view as the sea remained choppy and at times the flock fragmented but it could be found after a few minutes scanning. Then just about 13:30 as the sun was getting fairly low in the sky and a bit of cloud cover came in, it was as if the lights had been switched off, the sea had become grey and the Scoters were now silhouetted. During this visit the sea was punctuated with a group of about a dozen Long-tailed Ducks, which deserved more attention, Red-throated Divers, a few Red-breasted Mergansers and groups of Eider cloaked the rocky shores that played home to Purple Sandpipers and Turnstones. No chance of a photo of the drake Black Scoter, here's a photo I took earlier and again over in Cape May County, New Jersey, USA. 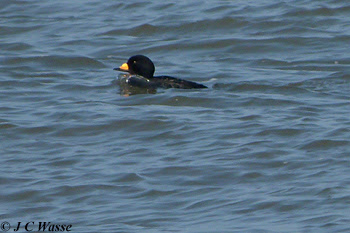 I don't know if Chris Rea is a birder but does Chris have Pink-footed Geese flying over the M1/M18 junction on the driving home for Christmas birding list? It's been a good autumn and early winter for 'Pink-feet' crossing South Yorkshire as they move between wintering grounds in Lancashire and Norfolk. This skein (ca. 100) were heading out west.
Elsewhere, a first ever visit to the gull roost at Blackmoorfoot Reservoir, north of Holmfirth, West Yorkshire where the recently present adult Caspian Gull and a dainty 2nd winter Iceland Gull joined a roost dominated by Black-headed Gulls and Common Gulls. Back to the south and the winds spoiled birding the South Yorkshire moors during the festive break, and when it wasn't windy there was thick fog in its place. Crossbills still noticeably absent at one typical site.
Ending with a trip over to the York area in the New Year where a recently found Great Grey Shrike posed at distance atop a farmland tree. It seems as if this sentinel is getting scarce both on passage and in winter in Great Britain, so this twitchable Shrike was nice to study. The photo below is of this bird present nr Wistow to the south of York, not from New Jersey. 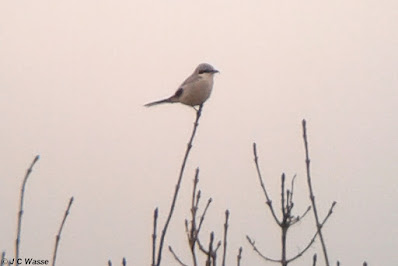