September 2021 described by some as poor for birding in terms of migration, specifically for rarities and scarcities from the East. Is this a blip, is it due to the timing of the weather patterns, or should we now be expecting double digit Yellow-browed Warbler sightings per East Coast site at this time of the year? Only time will tell. I can't grumble, I enjoyed the birding on offer.

First up the Isle of Wight White-tailed Eagle (G318) held on in the Peak District at the beginning of the month before heading off. Have a look at the Eagle's wanderings and of the work of the Roy Dennis Wildlife Foundation. Perhaps the onset of Grouse shooting persuaded it to seek pastures new. Nearby a Hobby or two lingered early on only before their journey south. Also on the moorlands a Peregrine annoyed Buzzards later in the month, as did Ravens. An Osprey moved slowly south over Ewden Heights late on a warm afternoon (21st). This was a nice surprise given the date, the distinctive flight profile as it carved a path across the sky was indelible. Ring Ouzel lingered in a clough, Stonechats kept watch from the tops of the heather and when the wind came from the West this would lead to Meadow Pipits moving through into the wind. A noticeable westerly movement of Chaffinches (26th), but perhaps too early for a "dweeze" of its northern cousin. Siskins started to gather but where were the Crossbills? A movement of Pink-footed Geese concentrated over 3 days (24th - 26th) with skeins heading towards Norfolk or Lancashire noted and mirrored to a degree elsewhere. Whilst watching one of the skeins a flock of hirundines flew through the field of view, summer hanging on. 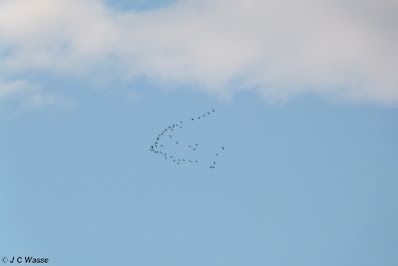 On the first visit back to Yorkshire a Green Warbler was found and took up temporary residence at Buckton, just along the cliffs from Bempton Cliffs RSPB. Success on the Friday morning, it showed well on and off for 15 minutes mid morning, and after a brief visit out to sea the Black-browed Albatross made its way back to nearby Staple Newk. Not a bad birding double. 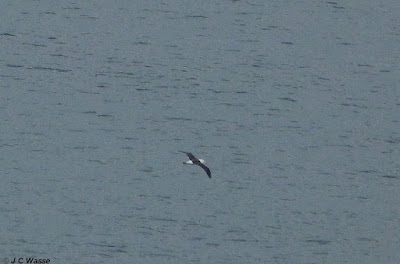 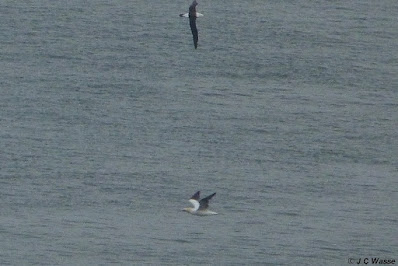 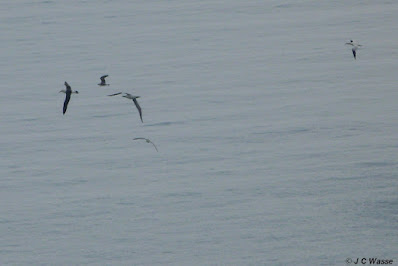 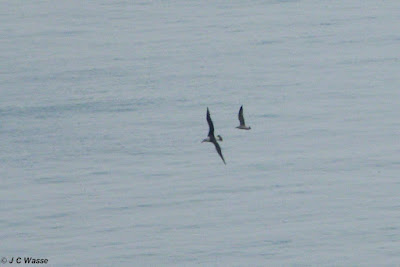 On the second visit back home a twitch over the Pennines to RSPB Burton Mere Wetlands, a picturesque reserve on The Wirral, where a Wilson's Phalarope proved popular (22nd). It showed ok, if a little distant. After roosting alongside a Ruff and Lapwings it swam to an island where it spent most of the time feeding along the shore in its characteristic upending style. A couple of Cattle Egrets at the pool were a nice distraction and a glance to the right revealed an insurance tick Ruddy Shelduck. A Merlin carrying a dragonfly, Hobby-esque, was noteworthy as it made its way over the Pool. 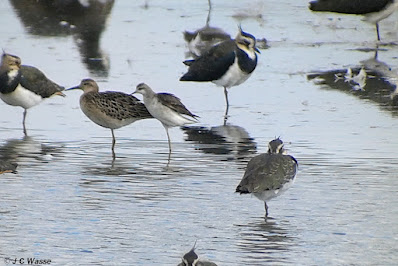 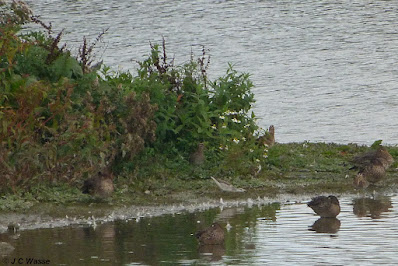 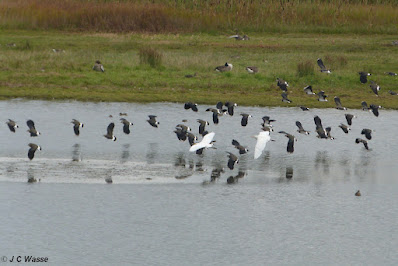 A wild goose chase? Between Old Leake and Wrangle on the Lincolnshire side of The Wash a Red-breasted Goose shimmered in the heat haze on the edge of the Saltmarsh at low tide (23rd). It had arrived a few days earlier with dark-bellied Brent Geese, several of which were present at greater distance. Following circulation of the photos on social media the presence of a leg ring was ruled out, so given timing and carrier species then why not a wild goose? A Yellow Wagtail flew by as a a skein of 60 Pink-footed Geese "wink winked" their way high East towards their Norfolk wintering grounds.
A visit to Spurn before a set of heavy showers added a variety of species to the September trip list (19th). Waders on the Humber shore were impressive in terms of number and variety of type and plumage, where a party of 7 pale-bellied Brent Geese had taken up temporary residence by Kilnsea Triangle. A group of the usual wintering dark-bellied Brent Geese flew past nearby Sammy's Point where an impressive sight of 7 Short-eared Owls performed aerobatics. Teal were on the move offshore past Kilnsea alongside other wildfowl, terns and gulls. On the way back a stop off at Blacktoft Sands RSPB on this still evening, now the showery front had passed, produced the male Bluethroat feeding at the back of the pool from Marshland Hide, the White-tailed Plover on a pool closer to the reception centre. Finally, a Great White Egret showed near to Little Egrets from Singleton Hide where the eclipse plumaged Wigeon glowed in the late evening sunlight. All were showing clearly now the rain had gone. About 200 Barnacle Geese in flight towards the Humber/Alkborough, evidence in part of the ever growing GB feral population. 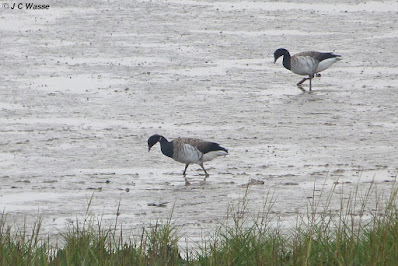 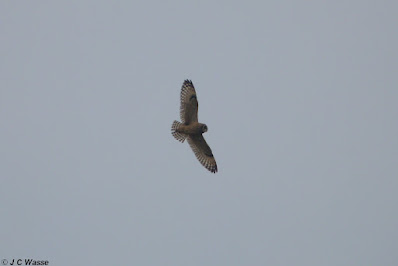 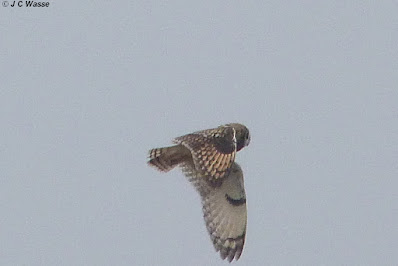 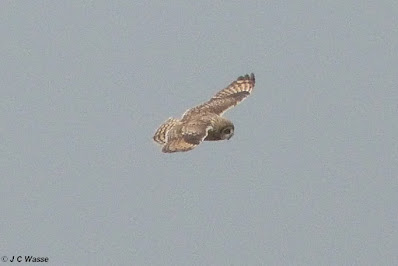 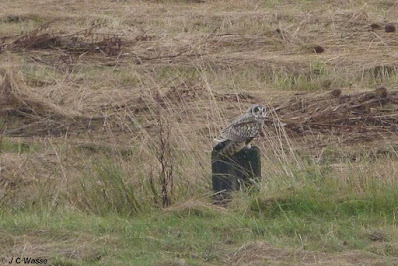 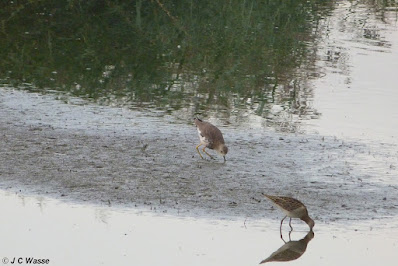 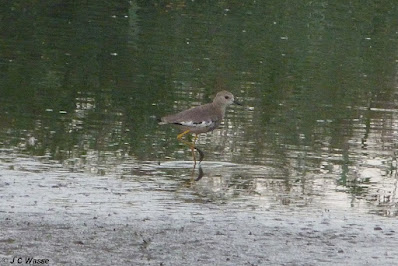 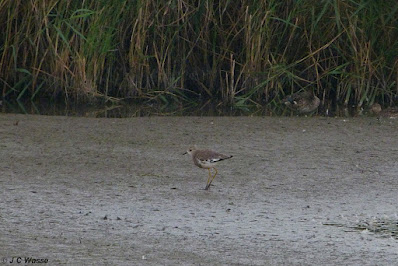 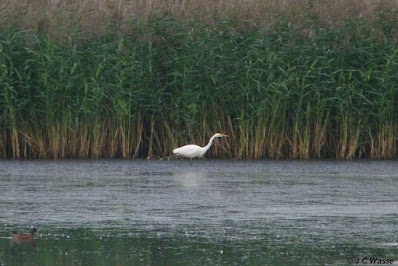 The distant Idle Washlands Stint on the Nottinghamshire side of the border with South Yorkshire was educating (25th). Sporting a red neck, or was it best described as a red breast, a Stint with a hunched posture, could it have been the rarity? The lack of red above the breast was worrying or interesting, but it's easy to be wise after the event. Birders with far greater knowledge and experience deemed it to be a Little Stint. Will have to revisit my notes on the Cley Red-necked Stint of August 1992. Along Slaynes Lane a couple of Great White Egrets were present on the trackside Pools, with the Flash at the bottom of the lane holding 6 more of these giants. 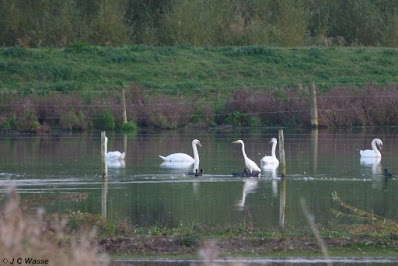