Twitching European Football on a near annual European footy trip with fellow Owls friends. An early start on the Eurostar from London St Pancras (Friday 5th October 2018), destination the Netherlands. I bet the train is too fast to spot anything at Rainham Marshes RSPB. Yep and moreover, a bit foggy! 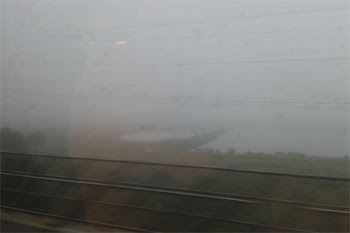 Time for a spot of raptor football on the outward leg from London to our base in Rotterdam. The fog soon cleared when crossing into Kent but the raptors were not playing ball, only a single Common Buzzard seen somewhere in NE France. 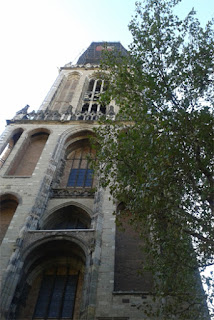 It could be Rotterdam or anywhere, Utrecht or Eindhoven!

Rotterdam's top team, Feyenoord, were out of town and the fixtures gave us a trip to watch FC Utrecht on the Friday night and then over to watch PSV Eindhoven the following day.So, first match up FC Utrecht vs NAC Breda, 8pm kick off. A short train ride NE from Rotterdam to Utrecht through characteristic flat lowland landscape, mainly farmland separated by water channels and small villages. Always do a bit of birding and the journey produced the occasional Common Buzzard loitering on a fence post with 2 or 3 Great White Egrets studying the channels. A small flock of a dozen Barnacle Geese, and possibly the more numerous Greylag Geese, had the Dutch equivalent of 'Category C' feel to them. Earlier on after checking into the hotel in Rotterdam a very pale Common Buzzard flew over this phase, a more common sight than back home when it can lead to confusion. 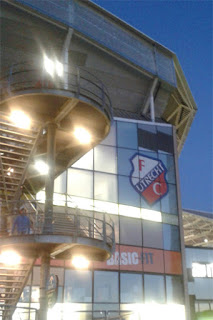 A few beers in Utrecht, a nice University city with more cycles than ever you could imagine! In the low 20's on arrival mid afternoon. A 30 minutes walk to the stadium along a canal, and a bag of chips before the match then joined the locals in the stadium. The first half and FC Utrecht were all over their opponents and took the lead on the stroke of half time from the penalty spot, only after the ref had checked VAR pitch side. Early on in the second half FC Utrecht extended their lead with an Adam Reach-esque curler from outside of the box and the game looked won. NAC Breda finally had other ideas and pulled one back, leaving not quite a frenetic finish but an exciting one. FC Utrect weren't exactly hanging on and a third goal wouldn't have been unjust. A nice atmosphere and passion from the home end, and the win moved FC Utrecht out of the bottom three but NAC Breda remained rooted at the foot of the table. Late train back to Rotterdam. 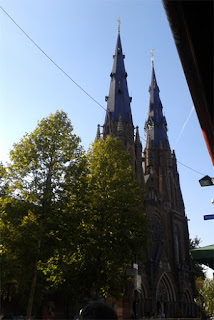 Whilst birding was patchy about a dozen Meadow Pipits SW over the hotel on the Saturday morning in Rotterdam proved some 'Mipits' were still on the continent. Saturday afternoon we took the train from Rotterdam to Eindhoven, just over one hour away having got a good deal online, worked out at 10 Euros each off peak with a group return. Again several Great White Egrets sighted in the fields en route, some giving a nice fly by. Soon we were taking in Eindhoven and a few nice beers. In the early evening we took the short walk from the city centre to Philips Stadium to watch the Dutch champions PSV Eindhoven host VVV-Venlo. PSV have had a flying start in the league this season, being unbeaten in their opening seven Eredivisie matches. This was soon to become eight. Got to our seats just before the 1945 kick off and the light show before the teams took to the pitch was spectacular. PSV's start to the game was more measured, working the ball nicely around the pich. The opposition VVV-Venlo were no pushovers but I felt that PSV could step up to another gear at anytime. They did manage to take a 1 - 0 lead before the break following a move with a few neat passes that proved to be clinical.After half time PSV moved through the gears. Our view was from high up, but was good because it allowed a study of the formation and movement employed by PSV. The final score of 4 - 0 perhaps flattered the hosts, there were several good goals and one came from a penalty following a VAR review at the end of second half injury time. The review was quick but an issue was the seemingly lengthy wait for a break in play for the ref to run off the pitch to view the monitor. A nice Stadium, decent atmosphere and easy access to the ground from the city centre made it a pleasant experience. Back to Rotterdam. 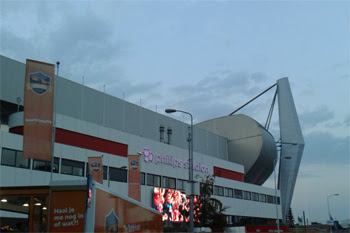 A flyby Egyptian Goose on the Sunday morning was probably one of two seen at the pond near the hotel on leaving. Left Rotterdam just before noon back to London on train, with a quick change in Brussels.A cracking trip, good football and good company with many thanks all round to the friends who went out of their way in helping to get nice accommodation, arranging match tickets and travel - top quality! Even if they didn't laugh at my jokes! 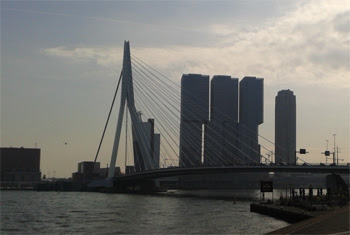