Klingon Starship or something simply Magnificent!

Mid afternoon during the World Series of Birding (12 May) in between Brig and Avalon somehow the conversation turned to Star Trek, especially the role of the Trill. At that time I didn't have a clue as to who or what Trills are! I mentioned that if we saw a Klingon Starship decloak during the World Series then, "I'm out of here!". Little did I know that 5 days later...

It's a seabird Jim, but not as we know it!

Leaving Cape May to travel north to Sussex County, NJ (17 May). However, before the journey north spent the early morning birding Cape May Point where it was soon obvious that there had been a bit of a fall of Warblers. Highlights included a female Golden-winged, singing Wilson's and several Canada Warblers at the Point. Whilst trying to relocate the Golden-winged RC kindly signed a copy of the cracking Crossley ID Guide to Waterfowl. Returned to the Point after checking out of the Stockton Inns (best place to stay in town) about one hour later and was quickly directed to the Coral Avenue jetty, because RC had found a Magnificent Frigatebird! After a brief panic and 2 minute journey that seemed like 20, there it was. Looking like a 'Klingon Starship' it even decloaked out of the fog bank high up over the water, but not too far offshore in looking to the SW. Having never seen examples of this family in the 'field' I have always wondered as to how distinctive and therefore how easy they would be to pick out on a 'seawatch'?
To to get a little closer I re-positioned myself along the Point jetties to the west before settling on St Peter's where I got lucky with the photos below and video footage of this rare visitor.

Why is it a 'Magnificent Frigatebird'?

From studying the bird in the field and then the photos and videos later, and then consulting the available literature - the big size, extensive pure white head, the white extending onto the underparts and clear cut 'diamond' collars on the underparts point to this being a juvenile Magnificent Frigatebird. This may be the expected species for this usually storm driven seabird in these parts, and perhaps adds credence. However, from a quick look at 'The Birds of New Jersey Status and Distribution' (Boyle and Karlson) I understand only 4 out of 24 NJ accepted Frigatebirds have been identified to species level as Magnificent. These figures may have changed since 2011 when the book was published. 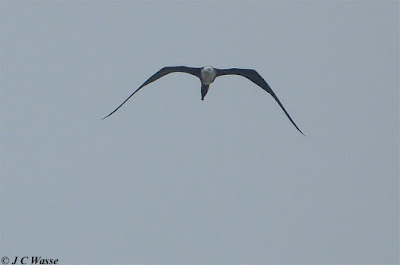 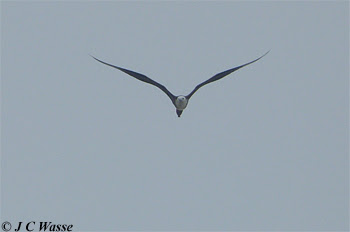 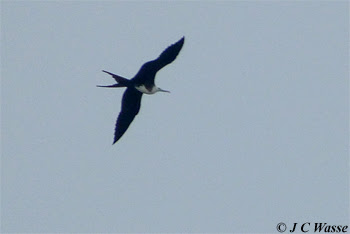 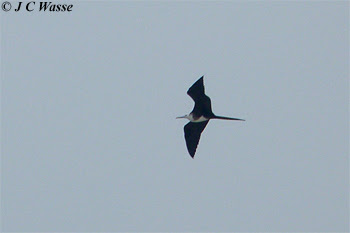 Stop Press: The above has been accepted by the New Jersey Birds Rarities Committee in their Jan - May 2018 review as Magnificent Frigatebird.
Posted by J C Wasse at 8:32 am