Visited Rainham Marshes RSPB, London on the first two Saturdays of the year where wintering waders were the highlight. Sightings included a group of up to 28 Avocets noted in Aveley Bay, a handful of Black-tailed Godwits, less than a hundred Golden Plovers and more than a hundred Dunlin gracing the Thames shoreline. Later in the month connected with over a hundred Black-tailed Godwits up at and beyond the Stone Barges, many more Dunlin in the same area (500) and a couple of wintering Common Sandpipers were noteworthy from walking down the Thames shore between the Stone Barges and the RSPB centre. A pair of Peregrines sighted on the first Saturday over the marshes, and Marsh Harriers were a regular sight on all visits as were Kestrels. Sparrowhawk and Buzzard present but less showy. Several Stonechats delighted visitors, Cetti's Warblers blasted their song from reedbed cover and Song Thrushes tested their singing skills.
A couple of visits to Thames Barrier Park, London in January and early February produced the sub-adult Yellow-legged Gull shown below. 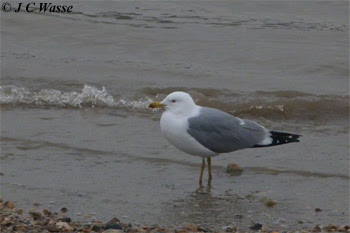 Red Kite within the M25 no longer an unexpected sight with one bird patrolling the skies in suburbia on a couple of Sundays.
Back home late January and moorland birding focussed on the Parrot Crossbills just over into Derbyshire above Howden Reservoir in the Derwent Valley. The long staying group of 12 were elusive, flying into the plantation tree tops after an hour's wait (Sat 27). Picked up on call - lower pitched than their commoner cousins and more drawn out 'jeep' as opposed to a sharp 'jip'. They gave a brief look before melting into the trees as they did at Xmas time. A flock of 17 Common Crossbills moved between here and the King's Tree area. Close to double figures of Ravens seen over the Yorkshire Moors to the east whilst Crossbill waiting, with at least two birds pairing up. The following day was windy not yielding much over Midhope Moors but a couple of Buzzards showed, and at the Low Moor feeders lots of Goldfinches and Long-tailed Tits tucked into the generous offerings.
Early February and the Staines Reservoir, London 'Shorelark' reappeared, a good candidate for one of the American Horned Lark subspecies. Connected with this rare visitor (Sat 03) but it took a while to perform for the birders, and coupled with being drenched in the fine rain this put paid to further birding elsewhere that day. Walking along the causeway about 0800 it suddenly appeared in flight on the S basin half way along the causeway giving its distinctive 'tee-dee' flight call. It moved W and went to ground in the mossy side of the basin. A calling Water Pipit went in the opposite direction. Back to the 'Horned Lark' which then took off again this time with a group of Meadow Pipits that appeared out of nowhere from the grassy edges, and they all appeared to drop down at the eastern end of the causeway. Could not relocate it but tried to let as many other birders know about it as they arrived on site from that end. It's always good fun trying to convince others of a single observer sighting. Glad that it was relocated back at the eastern end to allay fears of it doing a bunk and also to grab a few photos and video of this very rare taxon to this side of the Pond. However, this was about 90 minutes later and the bird had settled down feeding along the mossy verges of the S basin as the rain increased. Despite the damp conditions the views of this distinctive rich-toned bird were a lot better than before Xmas when it was way way way over in the NW corner of the N basin. Also of note was a Black-necked Grebe with partial sum plum ears gracing the S basin and several Goldeneyes were present on both sides of the causeway. The N basin held many Great Crested Grebes, looking huge on the relatively calm water. 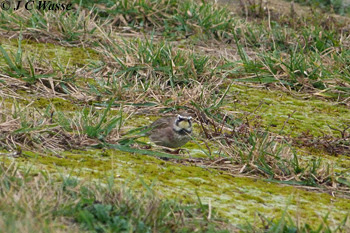 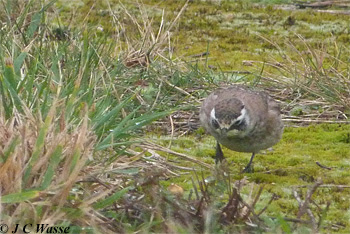 More photos from early 2018 at the top of the 'Latest UK Bird Photos' section. Please enjoy.