November Birding - stop Larking about, it's all about listing!


A bit of rough weather at Rainham Marshes RSPB (4th), Thrushes and Chaffinches dropping out of the sky in a squally shower, taking cover between the centre and the woodland. A small party of southbound 'dweezing' Bramblings were particularly noteworthy, as was a Firecrest that kept to cover along the edge of the Cordite. 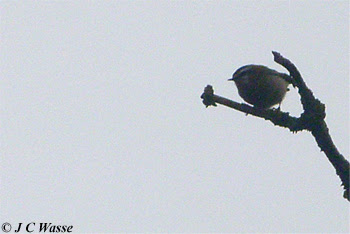 Back home in Yorkshire at Remembrance Weekend (11th/12th), weather a bit parky, sunny with a short and sharp Arctic blast. On the Saturday connected with the 'Wath Area's' first ever Marsh Tit as it zoomed over the top path of Warbler Way calling non-stop. The local Willow Tits playing second fiddle today. Marsh Tit is a rare visitor to the Barnsley Area so was it a one-off? If they are spreading, would there be an impact on the fragile local Willow Tit population? Fantastic from a somewhat selfish listing perspective though, my 190th species for the 'Wath Area' and 228th for my Barnsley Area list.

Soon up onto the South Yorkshire moorlands where Buzzards mastered the cold northerly wind to hang over the shallow valley edges. Two skeins of over 100 Pink-footed Geese each were probably bound for the north west. Sparrowhawks caused havoc amongst the passerines at Low Moor. The feeder bush at Low Moor played host to a nice variety of birds, where a Willow Tit was the star attraction this time. 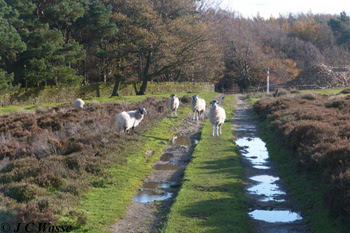 The welcoming party - looking for a snack 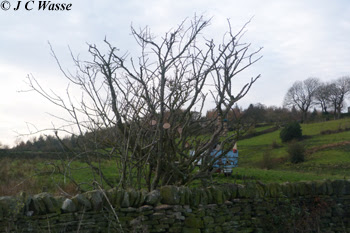 What next for the Low Moor Bush feeding station - Great Grey Shrike?

Back at Rainham Marshes RSPB on Sunday 19th with a good bit of wader activity along the riverside walk from near to the Stone Barges down to the RSPB centre. Sightings included many Redshanks, 120 Black-tailed Godwits feeding in the bay to the west of the barges, a (wintering?) Common Sandpiper flew by and a Turnstone called as it joined Black-headed and Common Gulls on the Stone Barges jetty. An adult dark-belied Brent Goose looked lost here as it flew up and then downriver, repeating this action a couple of hours later downriver in Aveley Bay. On the reserve at least one Firecrest continued on the edge of the Cordite and another highlight was of a fem/imm Black Redstart present late afternoon on the grey building out towards the middle of the reserve. Water Pipit back for the winter were pretty showy on site and a handful of Avocet noted as was a lone Ruff.
Rainham Marshes RSPB was quieter on Saturday 25th, 6 Avocets graced the Thames shore and a couple of Grey Plovers were seen in flight as a Peregrine zoomed by, one of the Plovers dropping onto the mud of Aveley Bay. A couple of 'cream crown' Marsh Harriers hunted over the reserve, a Buzzard was seen off by a Carrion Crow, Kestrels hovered high over the reserve margins and a Sparrowhawk scared all and sundry on the feeders by the centre. A different focus with a bit of a twitch on Sunday (26th) in London. Off to Staines Reservoir, train from Waterloo and a 45 mins walk from Staines railway station to the causeway (should have took the slow train to nearby Ashford instead!) The focus was the candidate (North American) Horned Lark sighted on the side of the north basin. Still present on that cold morning but the bird was very distant as it loosely associated with a flock of Linnets. This Lark did look different to the (European) Shorelarks I've seen wintering in the UK in the past, even at such incredible distance (x60 zoom needed). It would have looked really impressive had it been close as it had been the previous day. I've seen a few in the USA mainly on the eastern seaboard, but views have also been distant and hazy when seen along the sides of the runway of Cape May County Airport prior to and during several World Series of Birding attempts. Will pay them more attention next time, subject to the distraction caused by the cracking breakfast at the Flight Deck Diner at Cape May Airport! Interesting taxonomy with many subspecies but when and where where do you slice the Horned Lark cake? 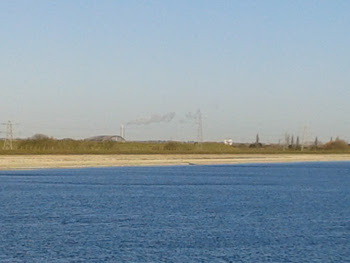 Staines Reservoir - Horned Lark - it's between the smoking chimney and the pylon to the right. See the bush to the left of the pylon and the red life-jacket on the fence. Ok, now go 5 o'clock from that to the set of paved slabs forming the side of the reservoir and the Lark is in the 3rd set of slabs up from the bottom of the reservoir hanging out with Linnets in the grassy edges to the slabs.
Posted by J C Wasse at 7:11 pm