A week back home and lots of Yorkshire birding to be done plus an excursion out of county to the north east.

Sat 23 Sep and Friday's star in Barnsley's current birding purple patch was present early morning, a showy 1st w Grey Phalarope. It performed to all on the slipway off the dam wall at Worsbrough Reservoir, where a Grey Wagtail tried to photobomb this northern visitor. Ended the day nearby at Old Moor RSPB where 2 Bearded Tits pinged by the reedbed screen with at least one Cetti's Warbler singing from a hidden perch. A beautiful juv. Peregrine kept a beady eye on proceedings from a pylon before spooking the 'Lappies'. At the other end of the reserve the main marsh held the Lapwings, ca. 60 Golden Plovers, a dozen or so Ruff, a handful of Dunlin, single Greenshank and the reserves iconic Green Sandpipers were also on show. A lone Little Egret on the main marsh, and a 'cream crown' (juv) Marsh Harrier was present over the reedbeds. 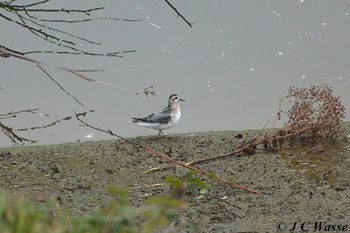 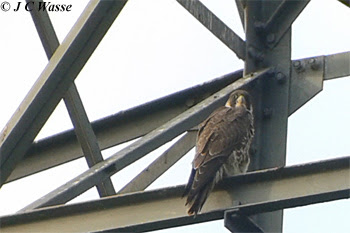 Sun 24 Sep and afternoon birding on the South Yorkshire Moors at Ewden Cabin joining Cabin regulars and visitors to this remote spot from 1330 to 1700. On approaching the Cabin a couple of Ring Ouzels chatted in the heather, and a few minutes earlier a lone Crossbill had flown west up the valley calling in flight. At 'base camp' Buzzards were in the area throughout the afternoon, joined by a cc Marsh Harrier for a little while. A group of 3 Ravens showed regularly and Kestrels were ever present with Sparrowhawk noted in the valley. As time passed by 2 more cc Marsh Harriers flew in together and late afternoon one of their number was joined by an irate Hen Harrier (ringtail) which lead to lengthy sparring and a 'Circus' soar-off. A juvenile Peregrine joined in the fun having got bored of annoying the Ravens. Walked back to more chattering Ring Ouzels. What's going on with a late season gathering of these summer migrants? A milestone of 200 passage 'Mipits' for the day was reached on leaving and a tit flock in scrub, literally on the moorland edge, held Chiffchaff and perhaps surprisingly of all for this location, a Treecreeper. Not a bad afternoon's haul.

PS - Not to forget the waders that zoomed past us over the moors on packing up. After a bit of consultation they were identified as a group of 6 Ruff split into 2 groups of 3 (a total of 4m and 2f - striking size difference seen in flight). 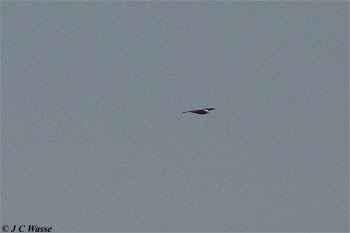 Mon 25 Sep twitching Spurn. Late morning at Easington a Yellow-browed Warbler called and showed in the sycamores by the carpark at the SW corner of the Gas Terminal. Nearby on the coastal path a Redwing was fresh in off the sea looking for cover, its 'seeping' call betrayed its presence. At Kilnsea several Redstarts flitted about and Chiffchaff and Lesser Whitehroat noted in the 'Triangle'. The slow paced birding was broken when news broke mid afternoon of presumably the previous day's Radde's Warbler. It had now been relocated along the densely covered Beacon Lane. Perhaps to be expected it didn't show on arrival. Staring at gaps in a hedge for an hour only as limited appeal so off up Beacon Lane. To do something different and also as word was that there were Red-veined Darters up there. The 'dragon' shown below was very welcome. Soon back down Beacon Lane and noticed the 'Radde's' hopefuls had shifted position, it had shown a few minutes earlier. Set up shop and focussed on the bramble scrub where it was last seen, and after a minute or two there was movement in the scrub. The skulker showed, its bright yellow 'super' glowed as did the striking black eye stripe. This warm-toned chunky 'Phyllosc' soon revealed it's yellow vent in a couple of more views as it went back into the scrub. A Yorkshire tick (#337), my last (and my 1st) way back in North Norfolk in October 1991. After leaving Spurn caught up with a juvenile Black Tern at Broomhill Flash at dusk. 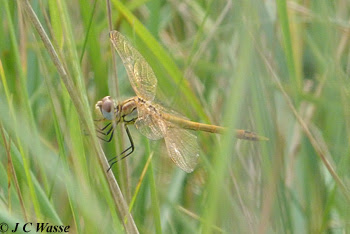 Tue 26 Sep and an early morning trip down the road to Old Moor RSPB chasing my local patch nemesis... Cetti's Warbler! Regular in Yorkshire and connected at RSPB's Blacktoft Sands and Swillington Ings, as well as at Tophill Low and Wintersett over the last few years, but the 'Wath Area' birds have always been out of reach for me from a seeing perspective. On this morning one male gave it's songburst several times from the reedbeds before 10am, but it was distant and moved further away to the left from the Reedbeds Screen, where a couple of Bearded Tits pinged their way along a channel heading deep into the reedbeds. I decided to chance the 'Green Lane' part of the reserve as I saw on the web that a 'Cetti's' had been noted there the previous day. On relocating at about 1030 a male was singing from the ditch half way between the Field Pool West hide and the track leading up to the Wader Scrape hide. Approached with caution as it was singing from an overhanging Willow a few yards from the path. It was on show walking along a bough low down in the tree, singing all the time. It made its way into the reeds at the back of the ditch, probably the best views of 'Cetti's' I've had (Wath tick #189). A brief interlude as birded the Moors early afternoon where several Buzzards and Kestrels were on show as were many passage Meadow Pipits and Swallows. Back at 'Wath' (Old Moor RSPB) late afternoon scanning the waders at Wath Ings. Loads of Ruff (37), 2 each of Little Stint and Dunlin, several Green Sandpipers and amongst the Lapwings were 70 Golden Plovers.

Wed 27 Sep and news broke before 9am of a big (but actually a small) rarity in the form of a Scops Owl up in County Durham. Lucky to have seen the Morwenstow, Cornwall bird on the cliff face in the Spring of '95 but the chance of seeing this gem from the Mediterranean was a bit of a no brainer! Joined the locals and twitchers watching the 'Scops' roosting in an elder late morning, where it snoozed, stretched and preened on occasion. It was well and truly 'papped' at a respectful distance from the path. Driving back south taking in Hartlepool Headland which held at least one riduculously elusive Yellow-browed Warbler, heard only, a Redstart with a couple of Sandwich Terms lingering offshore. 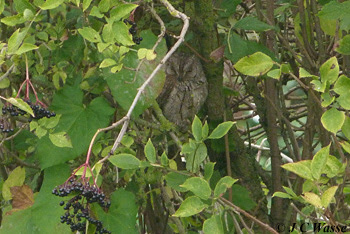 Thu 28 Sep and off to Spurn where late morning an Arctic Warbler gave itself up in the hedgerow at the back of the fields to the north of the road between the Crown and Anchor and Beacon Lane. It shared the bushes with a Pied Flycatcher and a couple of Redstarts. A 'standard' Lesser Whitethroat was nearby with another along the Canal bank. Arctic Warbler 'twitchers' had the pleasure of a hunting Hobby, a passage cc Marsh Harrier, and a Short-eared Owl over the hill towards Kilnsea Wetlands. Next stop the bushes at the southern end of Kilnsea 'Triangle' home to a couple each of Redstarts and Whinchats with a single Spotted Flycatcher for company. A calling Yellow-browed Warbler showed in the Crown and Anchor car park and another called from cover near the Bluebell cafe. A couple of Brambling 'dweezers' heard during the day. At Easington 2 more 'Yellow-browys' called, one from near the church and the other from a 'field-locked' copse near the Riding School on the road to Sammy's Point, where a juvenile Red-backed Shrike frequented the roadside edge. 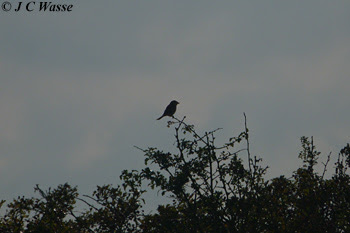 Fri 29 Sep and stayed local. Morning and late afternoon visits to Old Moor RSPB produced 1 Curlew Sandpiper, 2 Dunlin, 1 Black-tailed Godwit, 1 Greenshank, 70 Golden Plovers, 3 Green Sandpipers, 11 Ringed Plovers, lots of Lapwings and many Ruff (site record broken today). Little Egrets squabbled, Kingfisher patrolled the Willow Pool, and a juvenile Garganey added variety to the increasing autumn duck population. A cc (juvenile) Marsh Harrier hunted Wath and Bolton Ings and this sighting as well as 4 Buzzards over the latter would have been unheard of not too many years ago! In between the lowland visits the moorland edge held Peregrine, Buzzards, Kestrels, Raven with flyover Crossbills (9) at one reservoir. 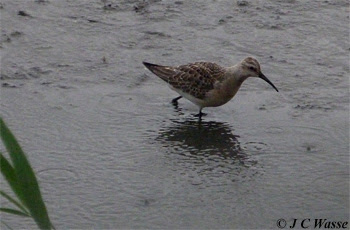 Sat 30 Sep and back twitching 'Spurn' in the afternoon, where the/a juvenile Rose-coloured Starling played hide and seek in an Easington garden. Nearby a juvenile Red-backed Shrike, presumably Thursday's continuing visitor, fed along a hedgerow west of the cemetery. A Sparrowhawk carried out a raid along this hedge but I think all the House Sparrows and the Shrike evaded capture. The morning's 'viz-mig' at Spurn was carrying on to a degree into the afternoon with 'Mipits', Swallows and Finches still passing overhead including Redpoll, one of which showed nicely at 'Corner Field'. The Crown and Anchor car park held a calling Yellow-browed Warbler, Chiffchaff, Goldcrest and singles of Pied Flycatcher and the rare Red-breasted Flycatcher. Instructive to hear the rattling call of the 'RB Fly' (with thanks to Johnny Mac and Tim S for help with the call). 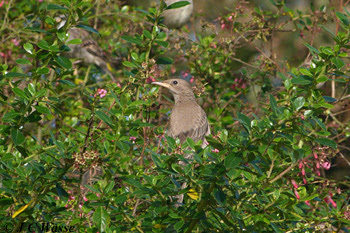 Good to catch up with everyone on my travels. Yorkshire and north east birding is always good, especially when migration is happening, be it coastal or upland and lowland inland birding. Speaking of the latter, the 'blue and white' stripes on the giant deck chair at Old Moor RSPB look stunning. Always a winning combination 😊 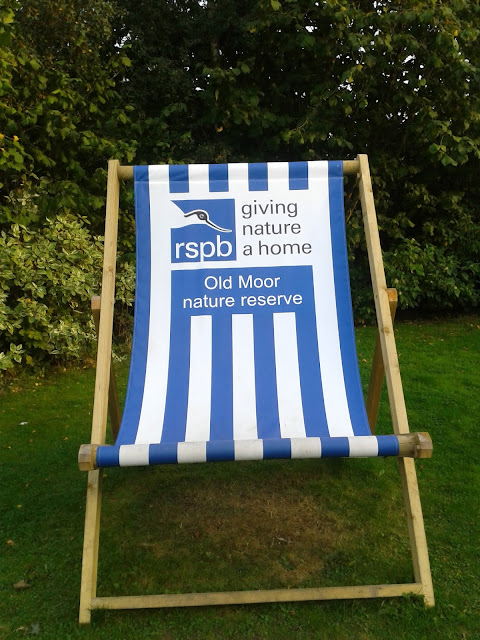