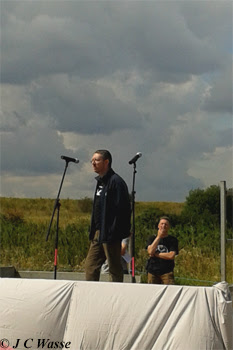 Saturday 05 August 2017 and back at Rainham RSPB for the first time in several weeks. It was Hen Harrier Day.

The message of the Birders Against Wildlife Crime (BAWC) Hen Harrier Day rallies was, is and continues to be simple - stop killing our Hen Harriers (and other raptors). Brilliant speeches by Rob Sheldon, Mark Thomas and Chris Packham, and a cracking performance from Peregrina EnChantica. Thanks to all for giving up their time to support this, one of many Hen Harrier day rallies.

I think the raptors knew what was going on as they put on a bit of a show. Just before the rally started they were much in evidence in the morning sunshine as a Kestrel sparred with a lively juv. female Peregrine over Aveley Pools. This was followed by a Marsh Harrier quartering the area a few minutes later and in turn a Sparrowhawk zoomed over the rally field. As Peregrina EncChantica reached a crescendo during their 2nd performance a Hobby towered over them having drifted over from the landfill. It continued high over the reserve. Magnificent.


Three more visits to Rainham RSPB mid month produced typical early autumn migration with waders moving about. On the 19th, a couple of flocks (approx. 30 in each) of Arctic Terns moved upriver within the space of an hour mid-afternoon. I picked them up from inside the Dartford crossing and they kept low hugging the Kent shore. Maybe nowt surprising here, but the weather was mild and sunny and the birds were flying into a light westerly wind at low tide. Clearly the birds hadn't been forced into the Thames estuary to seek shelter and perhaps were using it as a conduit to get from A to B. Akin to migration from The Wash to the Severn Estuary? Who knows? Passage Tree Pipit and Spotted Flycatcher were noteworthy sightings on the 20th, the latter drawing a stream of admirers to its favoured snags. 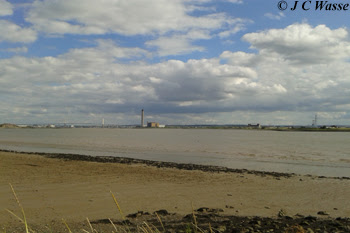 August Bank Holiday. For the last couple of years it fell right at the end of the month but was earlier this year. What's the significance? In 2015 and 2016 my dad and I were lucky to come across two passage Ospreys at or shortly after this weekend, both migrating on the South Yorkshire moorland edge just above Sheffield (01 Sep 2015 and 30 Aug 2016). 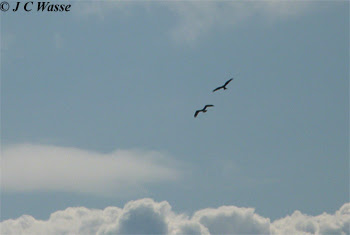 After drawing a blank on the Sunday morning this year (27th) I ventured off piste to the Flashes area up at Fairburn Ings RSPB east of Leeds where an Osprey was lingering. On reaching the roadside site, of Ring-necked Duck fame some 25 or so years ago, the Osprey was on the dead tree. It did eventually fly but was then buzzed by a Red Kite whilst a Peregrine looked on at the 'kerfuffle' from a lofty perch. 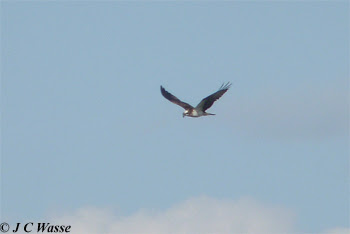 Eventually the Osprey drifted back and after a brief rest it was soon airborne and on its second sortie, now alone. At this time I was along the Lin Dike trail where this beauty gave a brilliant fly around. Of note were 3 or 4 Willow Tits 'dweezing' their way amongst the dense scrub, they were brilliant to hear with one showing well. Folk will be twitching these in years to come.

So, I got my August Bank Holiday Osprey. For the third year in a row, would have loved to have seen one migrating over the Moors, but that would be greedy? I was still hungry!
At about 10am on the Monday Bank Holiday at Low Moor, Midhope 3 Buzzards were minding their own business gliding over the ridge out west when my dad picked up a long-winged raptor flying purposefully past them the 'scope view' equivalent of photobombing. I got onto it as it approached Pike Lowe. It was keeping low battling its way south in the breezy conditions sticking to the level of the horizon. It was distant but we could discern the long-angled primaries, brown upperparts and white underparts. As it reached the peak at Pike Low it started to circle revealing uniform upperparts and the distinctive light barring of the uppertail, which it fanned...OSPREY! We jumped in the car to try and chase after it in the next valley, and we were soon below Ewden Heights where my dad picked up the bird circling the Heights. Lovely views of this masked raptor but it was soon heading out of town as it went into a power glide heading towards Broomhead Reservoir and off south. Got the message out to locals asap but sadly nobody else connected as far as I'm aware. Rounded off the weekend nicely watching 2 Spotted Flycatchers on hillside bushes back at Low Moor (with thanks to DS). First weekend in September. Light N winds veering to the W and sunny skies with good cloud markers for picking up any passage bird at Rainham RSPB. First stop the woodland but a radio message of an Osprey over the Darent across the river from the RSPB centre had us running back up the ramp. Another one!!! From the entrance I soon picked it up low over the 'sluice gate' with its large corvid entourage. It was leading them a merry dance and attempted unsuccessfully to gain height. Managed to get several birders onto the Osprey and after a fair few minutes it drifted fast and low east lost behind the power station near the Dartford crossing at 1010. It was seen by multiple obs on and off for about 20 mins. Cheers to Fraser and Howard. Most of the day was then spent skywatching with several wandering Buzzards, a couple of Marsh Harriers, Sparrowhawk and Kestrels noted. Best entertainment provided by the 5+ Hobbies hunting dragonflies over the reserve. Was struggling to age them with certainty but most looked like 1st summers, with one juv. that enjoyed accelerating to warp speed. One question though, how distinguishable are adult and 1st summer Hobbies to id in early autumn? 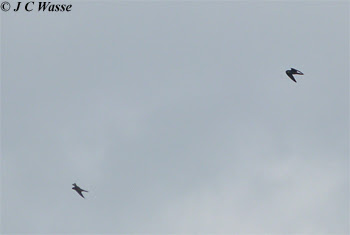 Hobby - 2 immatures had a bit of a row and zoomed over the reserve heading across the river.

More photos at the Latest UK Bird Photos section, click on the tab at the top of the screen.
Posted by J C Wasse at 7:48 pm