I go birding at Rainham most Saturday's meeting up with friends on site either after doing the long walk from Rainham station via the Stone Barges or the quicker route from Purfleet station to the RSPB centre. We would either head out onto the reserve or do a walk along the riverwall down into Aveley Bay and on to the 'Serin' mound, taking in the reseve after a much deserved mug of tea.

Saturday 06 August 2016 was slightly different. I set off an hour earlier than usual, taking in the two train journeys into and out of London respectively connected by a walk from Farrindon to Fenchurch Street not forgetting the obligatory McDonalds breakfast en route. It felt different today the analogy being that it felt like 'the morning of Cup Final day', or from a personal (birding) perspective it reminded me of the feeling of anticipation at 23:55 five minutes before the start of the World Series of Birding - offset by praying for the Sora and Virginia Rails to continue singing at kick off! The Cup Final was coming to Rainham!

Arrived on site about 08:15 and the centre was in full swing. Staff, volunteers and visitors were buzzing round the centre, and soon a near full complement of 'Motleys' were ready to bird Aveley Bay and Serin Mound. The sun was blazing down and the birding was slow. Whimbrel, Curlew and Oystercatchers of note from Aveley Bay as were a couple of blogging Yellow Wagtails, whereas a glance across the river soon revealed some Yellow-legged Gulls either in flight or shimmering in the heat haze on the mud on the south side of the Thames. They were also being carefully scrutinized by DM (Birdwatch) whom we congratulated on the acceptance of the Slaty-backed Gull, now it's time to find a 'Black-tailed' example on site. Serin Mound was quiet birding wise and produced a family party of Kestrels over Wennington Marsh, and we soon returned to the centre. I think I was annoying the gang giving time checks along the riverwall so as not to be rushing for the Hen Harrier Day rally. A look into the field near the MDZ and the event was beginning to take shape. After a nice mug of tea we made our way down to the event, it was literally standing room only.

So what is all this about, "Hen Harrier Day".

Taken from http://www.rspb.org.uk/community/placestovisit/rainhammarshes/b/rainhammarshes-blog/archive/2016/08/04/hen-harrier-day-2016-comes-to-rainham-marshes.aspx
(Birders Against Wildlife Crime) BAWC launched Hen Harrier Day in 2014 to raise awareness of the serious persecution suffered by these spectacular birds of prey. Despite full legal protection since the early 1950s, hen harriers remain absent from vast swathes of the UK. They are now almost extinct as a breeding species in England, primarily because of illegal persecution on intensively managed areas of upland grouse moor.Hen Harrier Day has quickly become an annual fixture, growing from a single rally in the Peak District just two years ago to 12 events this year across the UK, including several events in Scotland and Northern Ireland. Four of the events will take place at RSPB reserves.

The event started at around 11:00 with Dr Mark Avery introducing the day and handed over for speeches from Charlie Moores, Chris Packham and Dr Mike Clarke. I found it to be a wonderful event, well attended, with the speeches at the right tone presented in a passionate yet professional manner. 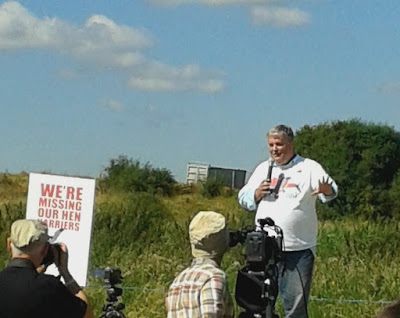 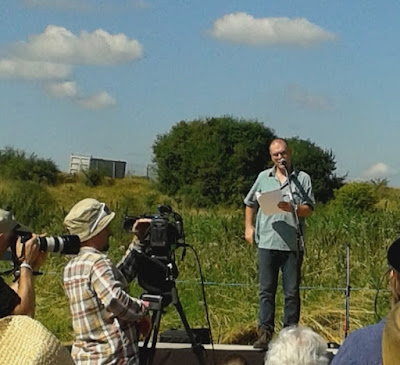 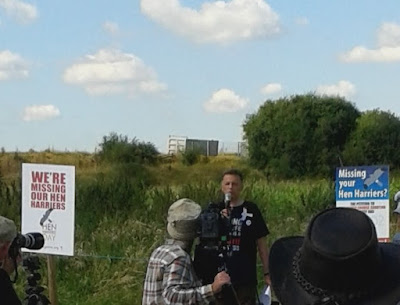 Much respect to the speakers, the organisers, local staff and volunteers for hosting a special event. No doubt there will be analysis of the day on t'internet in days and weeks to come from both sides of the argument.

A good appraisal of the day can currently be found on the Rainham Marshes RSPB blog by clicking here http://www.rspb.org.uk/community/placestovisit/rainhammarshes/b/rainhammarshes-blog/archive/2016/08/06/you-came-you-marched-you-rallied-to-a-cause.aspx